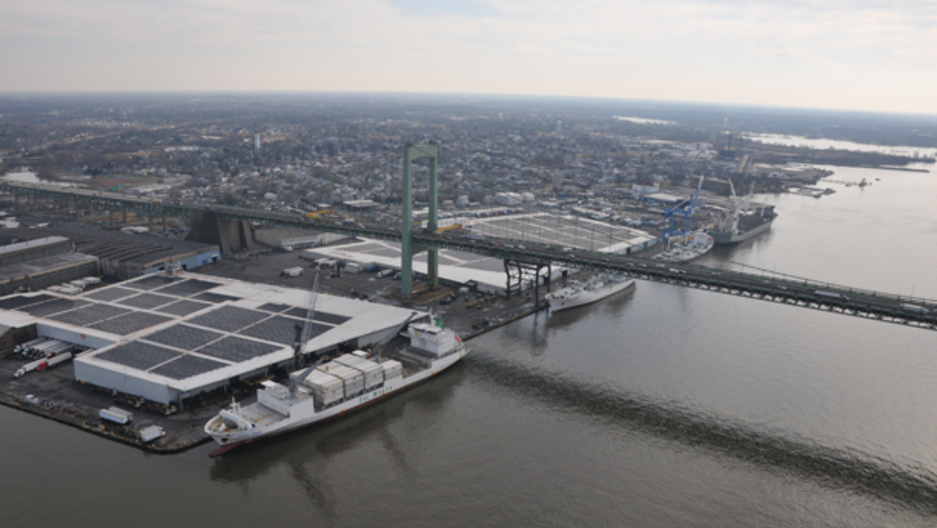 The Gloucester Marine chilling facility at the Port of Philadelphia is where much of the nation’s east coast produce arrives. (Photo courtesy of Independence Solar.)

It's the largest rooftop solar array in the country. It just opened and couldn't have been built at a better time.

Panel construction on the roof of the terminal came during a lull in solar power development. Solar power has been hit hard by the economic downturn and the growing supply of cheap natural gas. Recently, three of the biggest solar manufacturers announced large layoffs and cutback production. But as the Holt family, who own the terminal warehouses, learned, the situation is bright for one sector of the solar industry: corporate rooftop solar.

"They were being approached by all these Wall Street hedge funds, private equity investors, who said, 'Hey let us lease your rooftop from you. We want to put a solar energy system that we pay for on there,'" Peltzman said. "And after the third or fourth meeting the management of the Gloucester Marine Terminal said, 'Why is everyone so interested in our roof for this solar energy? If it’s such a great idea, maybe we should consider doing it on our own without these hedge funds.'"

Utilizing state and federal tax credits for green energy projects, Peltzman was able to help the Holt family turn their unused rooftops into an economic boon.

Panels were installed in five months and cost $42 million. For the Holt family, the project was a smart investment.

The solar panels are expected to generate close to 80 percent of the warehouses' power needs; the Environmental Protection Agency estimates the system will eliminate 9,500 tons of carbon dioxide. Peltzman said the panels will likely save the Holts between $1 million and $1.5 million per year on their energy bills, enough to offset the family's loans for the project in just a few years.

During the Bush administration, a generous tax credit was implemented, allowing for thirty percent of everything a business spends on solar energy to be subtracted from its taxes. During the recession, businesses weren’t making money and weren’t installing solar. To spur the industry, the Obama administration switched the tax credit into cash. Then the rooftop gold rush was on.

Congressman Robert Andrews, a strong supporter of the Gloucester Marine Terminal project, presented the Holts with the $11 million federal tax rebate that made the project possible.

"This is what the future looks like in America," Andrews said. "This did not happen by accident. This happened because it’s smart. It happened because there’s a need for this kind of energy."

Investors too aren’t spending as freely on solar projects right now. But the solar energy trend is likely to continue, even if it’s not as hot. About half the states have clean energy policies that encourage it, and the price of panels is at an all-time low.