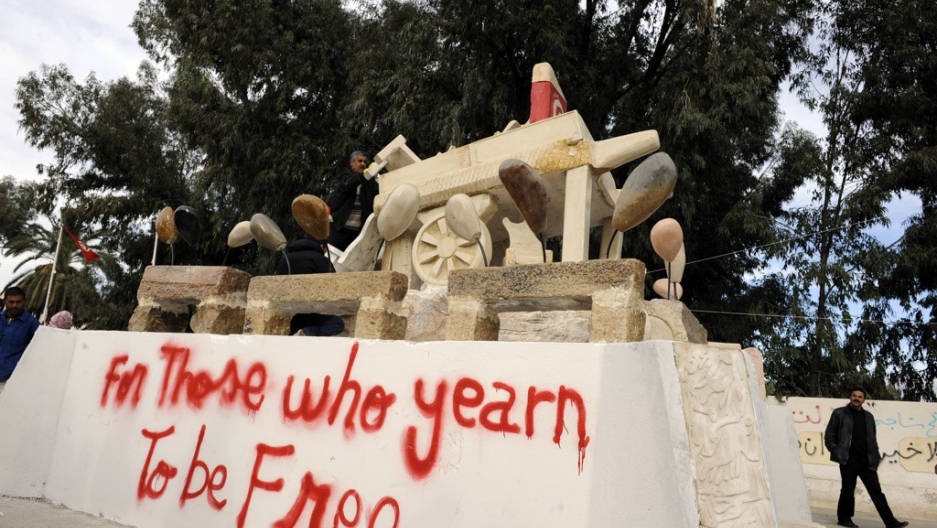 A man walks past the statue representing the cart of Mohamed Bouazizi, the fruit seller whose self-immolation sparked the revolution that ousted a dictator and ignited the Arab Spring, in Sidi Bouzid, Tunisia.
Credit: Fethi Belaid
Share

SIDI BOUZID, Tunisia — An angry crowd of protesters recently gathered in front of the Sidi Bouzid city hall, on the very spot where the Tunisian uprising began. They were protesting 19 percent unemployment and growing inflation.

One of the demonstrators, Alawi Tahrir, said that economic conditions have not changed for most Tunisians since the uprising began in December 2010.

“I have a master's degree in the English language, and I'm still unemployed after five years,” he said.

Seventeen months ago a street vendor named Mohamed Bouazizi immolated himself here, a hardscrabble agricultural city 175 miles south of the capital, Tunis. He had been unable to find work and authorities prevented him from selling his goods.

His death sparked immediate protests, a vicious crackdown by police, and the uprising that overthrew the dictatorial regime of Zine El Abidine Ben Ali a month later. The spirit of rebellion spread throughout the Arab world.

Today the city government has erected a larger-than-life sculpture of Bouazizi’s cart in his memory. Residents said that although they enjoy greater political freedoms, they continue to suffer from the crony capitalist economic system.

Tunisia held elections last October for a Constituent Assembly that is tasked with writing a new constitution. The center-right Islamist party, Ennahda, won 42 percent of the vote and formed a coalition government in January of this year. Critics say Ennahda has failed to combat unemployment and inflation, leading to a series of strikes and militant street demonstrations.

“Two-thirds of these strikes are by young people who were promised during the campaign for the Constituent Assembly that they would get jobs. They never got jobs,” said Chedly Ayari, an economist and former head of the Arab Bank for Economic Development of Africa.

“Leftists and the old ruling party instigate these demonstrations,” he said. “They will support any social movement against the government.”

Ennahda leaders say they need more time to repair the economy. Said Ferjani is a member of the Ennahda political bureau in Tunis. The government, he said, is beset by ultra-conservative Islamists on one side and leftist unions on the other.

“We have to restructure an economy that has failed the country for more than half a century,” he said. “We need some kind of stability. Some of the people don't want stability because they don't want the government to succeed.”

Ferjani said his government is encouraging foreign investment that will generate jobs. He said German wire and cable companies plan to open new factories in Tunisia, although no ground has yet been broken. In addition, the US credited $100 million to pay down Tunisia’s debt to the International Monetary Fund.

“We must strengthen our relations with the US in particular, with the EU and the West,” he said. “We are proud of this relationship with the US.”

But leftist critics of the government strongly oppose such ties. Prominent blogger and university lecturer Lina Ben Mhenni said the US opportunistically supported Tunisia's uprising after years of backing the Ben Ali dictatorship.

Wikileaks cables show that prior to the uprising, the US cooperated with Ben Ali to encourage US corporate sales and fight “terrorism,” although there were no Al Qaeda-type groups in Tunisia.

“They were aware of the situation in which we were living,” said Ben Mhenni. “They closed their eyes because they had economic and other interests with Ben Ali. Now they are doing the same with Ennahda.”

Economist Ayari, a prominent banker, criticized the US for giving $100 million to the IMF rather than directly to the Tunisian government, which could have used the funds to create jobs.

“We are deemed not able to manage our own money,” he said. “It never happened in the past.”

Tunisia has scheduled parliamentary and presidential elections in one year. Until then, analysts said, political turmoil and economic instability may well continue.

“The problem is with the system. The same system of Ben Ali is still running in the veins in this government. We want new blood. We want a new system,” he said.