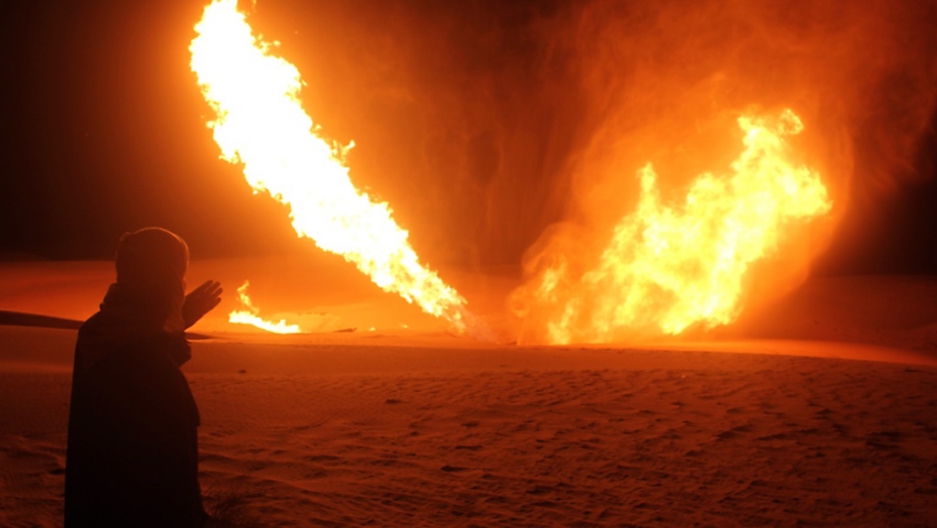 An Egyptian man looks at flames rising from a pipeline that delivered gas to Israel and Jordan after it was hit by an explosion in November 2011.
Credit: -
Share

CAIRO, Egypt — While much of the world sees Egypt’s decision to cancel a natural gas contract with Israel as a threat to peace, Egyptians say it just makes good business sense.

Not so, says EMG, which told Reuters on Wednesday that the gas supply was interrupted because Egypt failed to protect the feeder pipeline in the Sinai Peninsula from militant attacks.

But politics and peace treaties aside, experts here say the deal — clinched at below-market prices under the notoriously crooked regime of former President Hosni Mubarak — makes little sense for Egypt, a nation scrambling to boost its tumbling foreign currency reserves. Egypt is also struggling with a ballooning demand for energy that will soon outstrip supply.

“The deal was not good for Egypt economically speaking,” said Magda Kandil, director of the Cairo-based Egyptian Center for Economic Studies. “The gas was underpriced, and it does not make sense that if you are unable to meet domestic [energy] consumption, and are in need of foreign currency, that you are not at least getting the best price for your exports.”

More from GlobalPost: Egypt rejects licenses for 8 more US nonprofits

Israeli and US officials had hailed the deal as the beginning of a new era of economic cooperation between the two countries, which fought a series of wars following the creation of the Jewish state until a peace treaty was signed in 1979.

Proponents of the gas deal said linking Israel and Egypt’s energy security would provide a solid economic foundation for a lasting peace under the treaty, staving off potential conflict with commercial gains.

But since Mubarak’s ouster in February 2011, Egypt’s foreign reserves have dwindled by more than half, or $20 billion. Natural gas export revenues are a main source of that money.

Egypt holds proven gas reserves of 77 trillion cubic feet and exports 650 billion cubic feet each year. But a combination of high-level corruption, poor resource management and poor economic policy meant that from the outset of the deal with Israel, Egypt was not benefitting from the gas exports in the way it should.

Egypt’s government has never officially released the price that sold gas to Israel, allocated under the contract at about 250 billion cubic feet per year for 20 years.

But local media put the price as low as between $0.70 and $1.50 per million British thermal units (BTU), or 868 cubic feet. If accurate, that price was in line with some of Egypt’s other natural gas export contracts, including with Jordan, but not with the average international market price that analysts say is closer to $6 or $7 per million BTU.

More from GlobalPost: Egypt's next revolution could be over water

If Egypt were to revise its contracts with neighboring states to sell natural gas at even $4 per million BTU, it would provide Egypt with an additional $3 to 4 billion in much-needed foreign currency, Kandil said.

“With these contracts, you are depriving the economy of these benefits,” Kandil said, adding that annual natural gas export revenues are difficult to pin down because they are lumped in with other export earnings and funneled into the fuel subsidies regime.

But while Egypt is indeed in dire need of boosting its foreign reserves, it also needs to hold onto its energy resources in order to meet rising demand for electricity as its population grows.

In 2009, Egypt consumed 1.5 trillion cubic feet of natural gas, according to data from the US government.

More than 70 percent of Egypt’s electricity is generated with natural gas, and because of the heavy subsidies, it is the premier power source for both industry and residents alike. The budget for the 2011-2012 fiscal year included gas subsidies of LE 15 billion, or $2.48 billion.

According to the US Energy Information Administration, Egypt, with a population of 80 million, produces roughly 124 billion kilowatt hours (kwh) of electricity per year and consumes 109 billion.

According to the Dutch Ministry of Economic Affairs, Agriculture and Innovation, which facilitates Dutch-based investment in Egypt’s energy sector, from 2011-2020, Egypt’s demand for electricity will grow at an annual average rate of 4.5 percent.

More from GlobalPost: Egypt loses its grip on the Nile

Unless Egypt curbs exports, reigns in domestic consumption or makes an unexpected discovery of more natural gas fields, it will be forced to purchase costly energy imports. That, coupled with ageing infrastructure, Egypt would likely grapple with intermittent blackouts and the rise of a local black market for energy.

“We are talking about demand for a product that is not elastic. People cannot do without it,” Kandil said. “And there is no process in place yet to ration [electricity] consumption.”

Even now, Egypt is forced to import petroleum products to meet some of its energy needs because it continues to send natural gas abroad.

“We import all kinds of oil products, which cost Egypt over 95 billion pounds [$15.8 billion] each year,” said Dr. Ibrahim Zahran, international petroleum expert and former CEO of Egypt’s Khalda Petroleum Company. “So we can minimize [this expenditure] by using the gas sent to Israel in the local market.”

“I am happy with the decision to stop exporting gas not only to Israel, and to other countries as well,” he said. “Because our production is very limited, our reserves are limited, and our demand is high. We have to satisfy the local market before we export a single foot of gas to another country.”