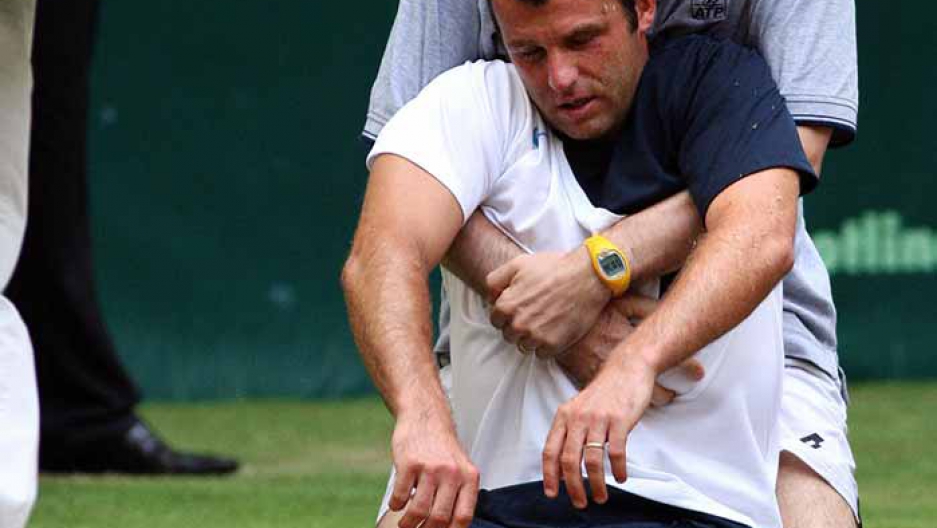 Frenchman Marc Gicquel is dragged away by a doctor after he received a serve, travelling at 208 kilometres per hour, in the testicles during the fourth day of the Halle ATP tennis tournament, 14 June 2007 at the Gerry-Weber-Stadion in Halle, western Germany.
Credit: Patrik Stollarz
Share

A woman on her way to pick up her child from school parked her scooter in front of a man's shop. The man wouldn't have it.

What began as a shouting match soon turned physical, and as they grappled and tussled with each other in the street, the woman clasped the man's testicles in her hand, squeezing so hard that he collapsed on the ground.

Paramedics on the scene could not revive him, and when he was brought to a hospital he was pronounced dead.

Aside from the revulsion at least 50 percent of readers must feel when reading this, the next thought is probably: "how?"

Gizmodo took the question to a San Diego-based urologist who said it is indeed possible to kill a man by squeezing his private parts, though the cause of death is likely more indirect. "The testicles are exquisitely sensitive to touch," began the doctor, "and there is a huge release of adrenalin when there is excessive force applied to these organs."

A strong squeeze, he wrote, "causes men to stop abruptly what they are doing, lie on the ground, close their eyes and bend their knees."

So how did he die? "A heart attack could certainly result from severe testicular pain from squeezing."

So whether it was the sudden squeeze that killed him or the sudden stop of his heart, we now know that there are just some street fight moves that should be off limits.