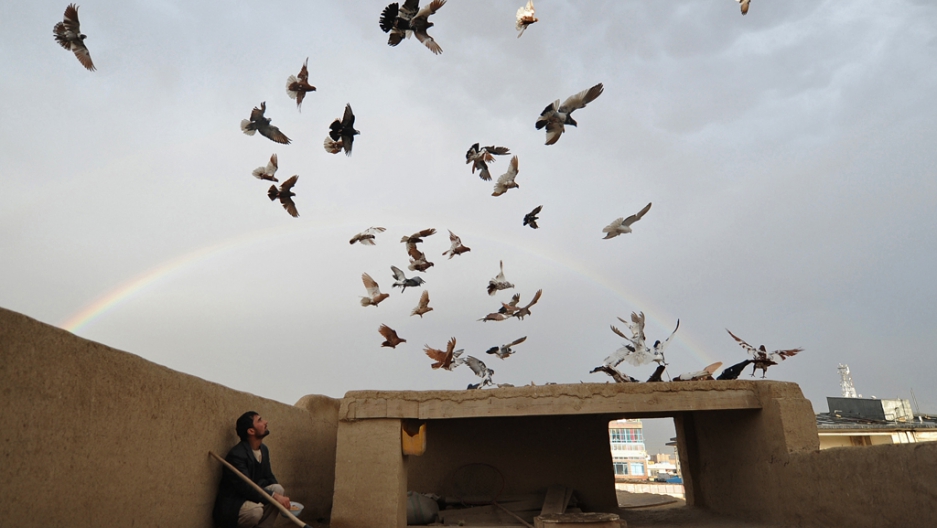 An Afghan man watches pigeons on the roof of his house as a rainbow forms in the background. A new study has found that pigeons' may have "GPS neurons" in their brains which help them navigate.
Credit: AFP
Share

Pigeons' brains appear to contain "GPS neurons" that help them navigate, according to a new study published in Science journal.

Scientists at Baylor College of Medicine in Houston, Texas have discovered a group of 53 cells in the birds' brains that respond to the direction and strength of the Earth's magnetic field, BBC News reported.

Le-Qing Wu and David Dickman, the study's lead researchers, found that the neurons "buzz" at different levels depending on how strong the magnetic field is and which direction it’s pointing in, Discover Magazine's blog reported.

More from GlobalPost: Pigeons can do math

"It is still unknown what exactly acts as a receptor within the bird; however, in our current study we are able to show how neurons in the pigeon’s brain encode magnetic field direction and intensity," Dickman told blog TG Daily. "This is how we believe birds know their position on the surface of the Earth."

The scientists worked with seven awake pigeons, and used a Tesla coil to cancel out the effects of Earth’s magnetic field on the birds, Popular Science explained. They put the pigeons in a dark room to eliminate the effects of light polarization, which are commonly thought to help animals navigate magnetically. The researchers also stabilized the birds’ heads to prevent them from relying on inner-ear cues for direction, according to Popular Science.

The researchers then created magnetic fields of their own, altering their strength and direction, and recorded the pigeons' individual neuron activity in an area that connects the brain and spine, and helps with birds' balance, according to Discover.

The scientists found 53 neurons that fire at different strengths depending on how strong the magnetic fields around them are; the birds were found to be most sensitive to the range of intensity that the Earth produces naturally, according to Discover.

However, researchers have hypotheses that navigational neurons are not the only directional mechanisms pigeons use; they are also looking into features in the birds' ears, eyes and beaks that may help the animals find their way, Slate reported.

Henrik Mouritsen of the University of Oldenburg in Germany has received the study's results with skepticism, according to BBC News.

"[Magnetism-sensitive neurons] must be in the brain in several places... and maybe Dr. Dickman has found them, "Mouritsen told BBC. "If he has, it's a very, very important finding, but only time will tell. There have been lots of claims of something similar to this, and so far every one has turned out to not be independently reproducible."

The study hasn't revealed how pigeons sense the magnetic fields in the first place, TG Daily reported, though Dickman believes that an as yet-undiscovered magnetoreceptive cell in the animal's ear could be responsible, he told Discover.

“Maybe there are two or even three receptors that come together in the brain to work together,” Dickman said.