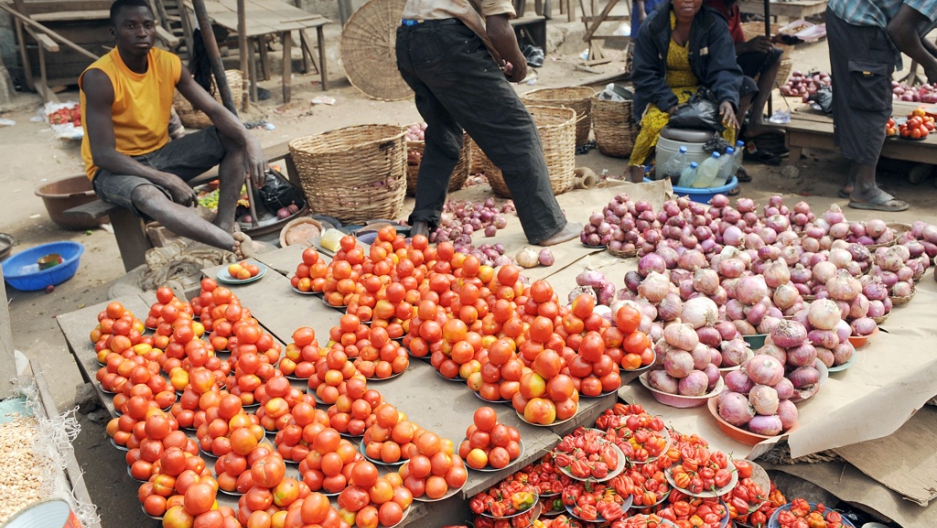 ABUJA, Nigeria — Here in Nigeria’s capital, it can be easier to purchase fruit flown more than 1,000 from the Middle East than to buy what’s grown a few hours’ drive away.

Supermarkets in the capital display apples, kiwis and grapes, all imported from the United Arab Emirates.

Yet 125 miles north, in Kaduna, Nigerian mangos rot on the farms. Locals do not have the means to preserve them long enough to sell them in their own country, according to Member of Parliament Yakubu Umaru Barde.

“Because of the policy we have on agriculture, that is why we face food insecurity today,” Barde, also an agricultural economist, told GlobalPost. “But really, really, Nigerians can feed themselves. We have enough arable lands to be farmed. We have enough farmers.”

Like the rest of West Africa, Nigeria imports a large amount of the food it consumes, leaving the country vulnerable to volatile international market prices that can cause riots in even the most peaceful countries. It is true: Nigeria has adequate land and a climate to produce ample food for its population. But the country’s food imports are growing at what President Goodluck Jonathan says is an unsustainable rate of 11 percent. Critics say government plans to reverse the trend are facing insurmountable odds.

Nigeria, Africa’s largest oil exporter and most populous country, with 160 million people, already faces an Islamist insurgency in the north, militant unrest in the south and ethnic tensions that threaten to thrust the country to the brink of civil war. With more than half the nation living in extreme poverty, a sharp rise in food prices could trigger street riots and create chaos.

Government plans to reduce Nigeria’s dependence on imports are vast and varied. There’s $40 million scheme to eliminate rice imports by 2015  and a presidential promise last week to create 500,000 new jobs by turning Nigeria into a major food-exporting country over a four-year period.

Locals worry that even if these goals are achieved, change may come too late, as food prices could soar before the end of this year. Nigeria's 2012 budget does not include enough money to finance the decades-old fuel subsidy that was temporarily canceled Jan. 1, according to local newspaper, The Nation. Without the subsidy, fuel and food prices roughly doubled early this year, causing protests and riots and forcing the government to partially reinstate the subsidy.

Nigeria is not alone. Many African countries are confronted with similar problems. In 2008, rising worldwide food prices caused riots across Africa, according to the United Nations. Food prices are already dangerously high in the Sahel, the desert region that spreads across northern Nigeria, Niger, Mali, Chad, Burkina Faso, Mauritania, northern Senegal and northern Cameroon, according to the UN.

An estimated 6 million people may go hungry across the Sahel region in the coming months, according to Save the Children. The food crisis is a result of bad harvests, a sharp rise in food prices, misguided policies and regional instability, according to BBC analyst, Andrew Harding.

Barde, the MP, said Nigeria’s food insecurity results more from bad policy management than from environmental challenges. He said farm owners in Nigeria are eligible for low-interest agricultural loans, but the money is usually embezzled by corrupt insiders, leaving poor farmers without the means to buy fertilizer and equipment.

Existing government policies that aim to decrease food imports could work, he added, if they are implemented honestly. Currently, it is easier and cheaper to import food with agricultural loans than to grow it.

“If the government allows corruption to creep in,” he said, “where people who are not farmers take loans in the name of agricultural loans, and use it to build houses, it will never work.”

Critics say the policies are unlikely to be implemented in a way that makes Nigeria agriculturally self-sufficient. Shehu Sani, the president of the Civil Rights Congress based in Kaduna, said every government since 1999 has promised to help local farmers produce more food, without effect.

“The government cannot step on the toes of those who are importing because they constitute the bulk of those who contribute to the campaigns,” he said.

At a market in Kaduna, locals said Nigerian tastes have also changed, and people prefer imported rice. Last month, Minister of Agriculture Adesina promised that as Nigeria increased rice production, the government would help farmers grow higher quality grains that could compete on the world market, according to local newspaper, Punch.

Mohammad Yahaya, an electronics teacher, sat on a wood plank in a small shop selling sweets, sodas and cigarettes. He said people in Kaduna, one of many Nigerian cities that is reeling from recent bombings, are more concerned with food prices than with where the food comes from.