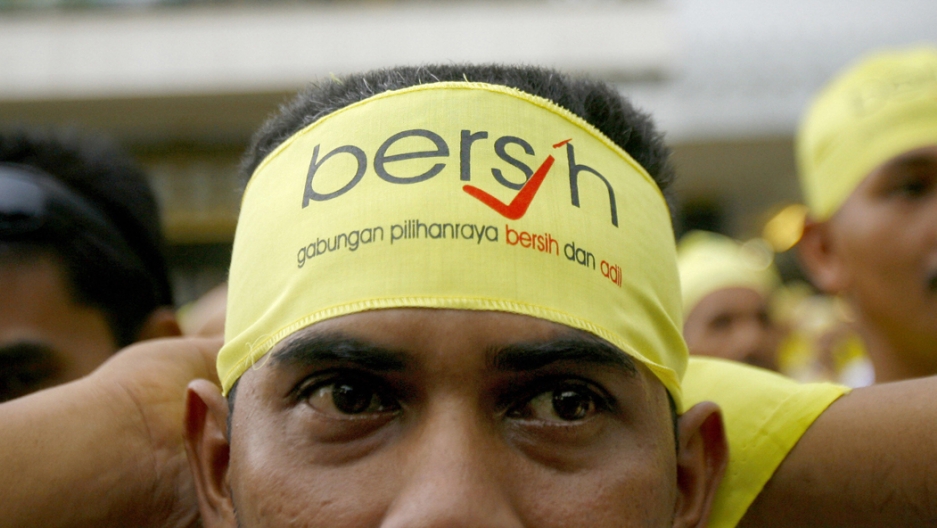 BANGKOK, Thailand — In the Arab Spring’s wake, pundits and politicians have toyed with predicting where a Tahrir Square-style street upheaval might catch on next. Candidates, however implausible, have included Russia, China, North Korea and, of course, Wall Street.

Malaysia, however, may prove more deserving of the comparison.

On April 28, droves of Malaysians agitating for reform will rally in Kuala Lumpur, the nation’s skyscraper-studded capital.

Organizers of this “Bersih” movement (Malay for “clean”) have predicted at least 50,000 demonstrators. They’re crossing their fingers for 150,000 or more. Supporters clad in the movement’s signature yellow shirts will kick off satellite rallies in cities across the Muslim-majority nation.

As in pre-uprising Egypt, Malaysia has been dominated for decades by a party warning that pandemonium could erupt without authoritarian rule. As in Cairo, protesters have been ordered to stay out of a symbolic location — Dataran Merdeka or “Freedom Square” — where the British colonial flag was once lowered to make way for independence.

Bersih, now in its third incarnation called “Bersih 3.0,” has become an escalating series of marches for political reform. All have been settled violently by police. The original rally, in 2007, brought out riot cops with water cannons. Last July, 20,000 protesters assembled for “Bersih 2.0” were scattered in a teargas-streaked crackdown.

“The reason [authorities] reacted that way is they’re afraid of losing power and, in the back of their minds, they’re aware of what’s happened in the Middle East,” said Bridget Welsh, a Malaysia expert and associate professor at Singapore Management University.

“They also made it illegal to protest in Merdeka Square,” Welsh said. “Why? Because it’s just like Tahrir Square in Egypt.”

More from GlobalPost: Tibetans in turmoil

According to a speech by party youth wing leader Khairy Jamaluddin, reprinted by The Guardian, opposition groups quote “social movements in the Middle East to instigate people to take part in street revolutions and, in the process, manufacture a Malaysian version of the Arab Spring.”

“To me, this is an extension of last year,” said Chin Huat, a political scientist at the Kuala Lumpur campus of Australia’s Monash University. “It’s our second independence. The first was from the British.”

“Come Saturday,” he said, “you will see this culture based on a one-party state further disintegrating.” The protests are timed to shape coming elections that, by law, must be called by 2013. Most expect voting to take place before June.

The movement’s specific demands focus on voting irregularities that, in supporters’ eyes, unfairly entrench one-party dominance. Bersih calls for the use of indelible ink on voters’ fingers — a defense against double voting — as well as more freedom for poll monitors and more transparency in postal balloting, seen as rife with fraud. Scant access to the largely pro-government media is another recurring grievance.

But there are less definitive demands — “stop corruption” and “stop dirty politics” — aimed at redefining how power is achieved in Malaysia. The ultimate goal, Chin Huat, said is to give rise to a new nationalism that discards decades of race-based policies.

There is almost no way to address politics in Malaysia without addressing race. The former British colony’s history has imbued the population with entrenched fears that racial discord will spiral into street violence.

One-fourth of Malaysia’s population is ethnically Chinese. Many trace their roots to the colonial period when the English helped install a Chinese merchant class. The current ruling party’s ascent can be traced back to 1969 riots that pit Malays against the comparatively wealthier Chinese, who lost thousands of shops and homes in an arson spree.

Even today, Malaysia’s politics and business remain enmeshed in race. Lesser parties under the UMNO coalition umbrella include factions drawn along ethnic lines: the “Malaysian Chinese Association” and the “Malaysian Indian Congress.”

Though UMNO’s affirmative action has enshrined favoritism towards majority Malays, these policies have hardly stopped ethnic Chinese or ethnic Indians (7 percent of the population) from prospering.

Eighty percent of the top 40-richest Malaysians are ethnically Chinese, according to a recent study in the newspaper Nanyang Siang Pau. Some of the community’s more famous celebrity exports include shoe designer-to-the-stars Jimmy Choo and latter-day James Bond film heroine Michelle Yeoh.

The sense that authoritarianism must keep class resentment in check has been written into the national narrative, Welsh said. “Now we’re seeing a new type of phenomenon in which the old narrative doesn’t cut it anymore.”

“People have seen authoritarian government as a lesser evil to ethnic riots,” Chin Huat said. “They feel that, well, this is a multi-ethnic country and we can’t afford real democracy and going out on the street. Even people who are very highly educated will say. The indoctrination is that strong.”

Bersih is, in part, a challenge to the us-versus-them mentality, Chin Huat said. “Now,” he said, “we are now burying that culture. People are talking about our commonality as Malaysians.”

In a departure from the Middle East analogy, few see the potential for all-out revolt from Bersih, which is still driven by the urban, middle class. Nor does Malaysia have much in common with the Egypt’s demographics. According to World Bank stats, Malaysia’s citizens receive a gross income per-capita of $7,760, classified as “upper middle.” That is roughly triple the figure in Egypt.

Still, there is high potential for low-grade chaos and repeat scenes from last year’s protest.

Bersih’s faithful are adamant in defying court orders to stay out of Merdeka Square. And though Bersih 2.0 proved embarrassing for police and officials on the international stage – Amnesty International called it a “brutal crackdown on peaceful protesters” – cops are already deployed en masse to control Bersih 3.0.

“It looks like a lot of people aren’t afraid anymore,” Welsh said. “When you tell someone who’s not afraid that they can’t protest, they’re just going to get more and more friends to come with them.”