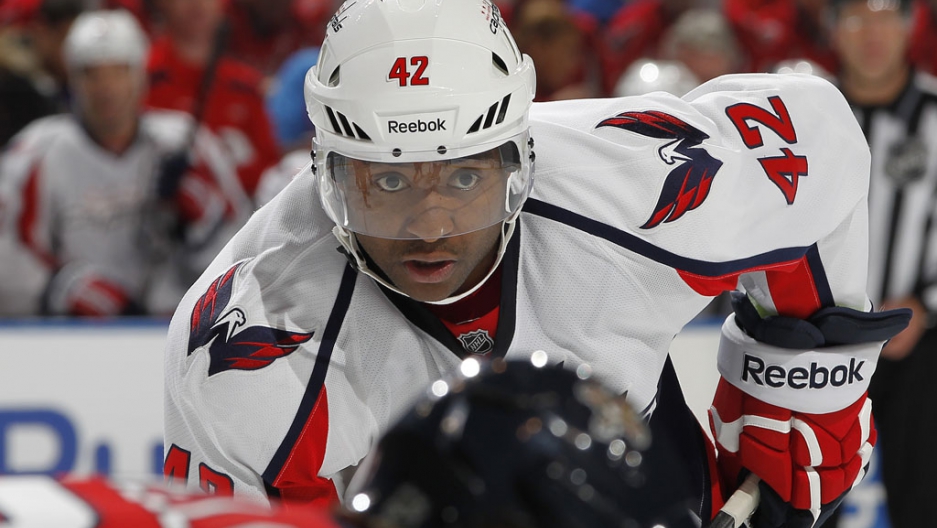 Joel Ward of the Washington Capitals became the target of racist tweets after he scored the winning goal against the Boston Bruins during the NHL playoffs.
Credit: Joel Auerbach
Share

One teen was fired from his job, another apologized over the phone and more are facing discipline from schools for sending racist tweets after Joel Ward’s game-winning goal in the NHL playoffs on Wednesday.

Ward, who is black, scored in overtime for the Washington Capitals in the clinching game over the Boston Bruins on Wednesday.

“Cowards that hide behind Twitter handles don’t represent the city of Boston nor our sports fans,” Mayor Thomas M. Menino said in the Boston Globe.

Ward – who wears No. 42 in honor of baseball legend Jackie Robinson – said he’s trying to put the incident behind him.

“I knew there’d be some angry fans probably, but it’s just sad to see,” Ward told his hometown newspaper, the Toronto Star.

“That didn’t take away the moment that we had (Wednesday) night, which was taking down the defending champs.”

More from GlobalPost: Jackie Robinson, No. 42

Many came to his defense, including former Bruin Anson Carter, who is also black.

Carter, who is now a television analyst, tracked down one of the Twitter users to Eastern Connecticut University.

He received an apology over the phone.

“I told him, ‘Don’t think you can hide behind your computer and say that to someone,’’’ Carter said, according to Boston.com. “‘Don’t act a certain way just because you can’t see my face, because you wouldn’t say that to me in person.’”

Another teen was fired from his job at a Boston-area deli, the Danvers Patch reported.

The teen wrote on Twitter after the overtime winner, “You guys let the n---er score? #imdone,” the Patch said.

“Please rest assured that the racist comments made (by) a former employee do not reflect the beliefs of the rest of my employees or myself,” the teen’s boss wrote on the company Facebook page.

For their part, Washington fans greeted Ward today at practice with a standing ovation.