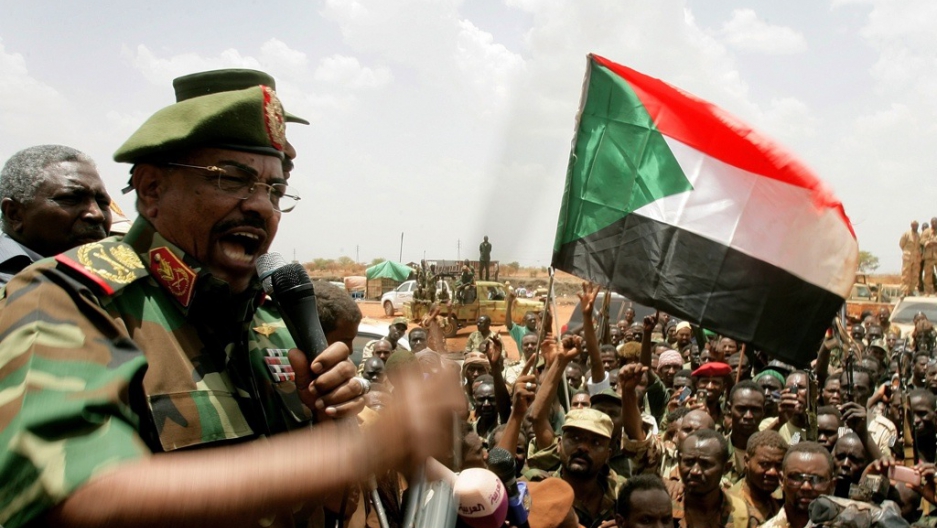 Sudan President Omar al-Bashir addresses troops during his visit to Sudan's main petroleum center of Heglig on April 23, 2012 after the South Sudan withdrew. Bashir said there will be no more talks with South Sudan and called the South Sudanese "insects".
Credit: Ashraf Shazly
Share

BOSTON, Mass. — What were they thinking?

When South Sudan became independent from Sudan last year why didn’t the international community see that the two countries would soon be back at war with each other?

Billions were spent on peace in Sudan. Less than a year later, their armies are lobbing bombs across the border.

Both Sudan and South Sudan claim the large oil deposits along the border between them. The border itself is disputed. The pipeline to pump the oil to the international market is in Sudan and no agreement was reached over how much South Sudan would be charged to use it.

There are bitter ethnic and religious rivalries on both sides of the border. Weapons are widely available. The two sides were at war for 22 years until 2005, and South Sudan only became independent because of concerted regional and international pressure.

More from GlobalPost: On Location: China's problem with Sudan (VIDEO)

Belligerent rhetoric bellows from both countries. Sudan’s President Omar al-Bashir, in particular, has a history of using violence and of ignoring international pressure. He is wanted by the International Criminal Court for alleged war crimes in Sudan’s western Darfur region.

So why didn’t the international community take some important steps to assure continued peace and stability between Sudan and South Sudan?

The fact that these issues are hotly contested has proved to be a weak reason. It would have been better to resolve them before independence than to leave them to fester between the antagonistic neighbors.

These areas of potential conflict were no secret when South Sudan became independent on July 9, 2011. Steps should have been taken to make sure that they did not jeopardize the peace.

Why weren’t these steps taken? Most likely because these measures would have cost a lot of money. Neither the UN nor the African Union had adequate funds in their budgets. Nor did the United States, which was instrumental in guiding the six-year peace process to South Sudan’s independence.

But it will be more expensive to set up these peacekeeping measures now. And lives have already been lost.

There are some bright spots among international efforts in the Sudans, however.

The Satellite Sentinel Project, set up by George Clooney, has provided valuable real time evidence of the build up of troops and weapons. It has also provided proof of hostilities, so that anyone can verify that border towns have been attacked and razed.

Recently the satellite project has shown a commendable fairness, by pointing out that both Sudan and South Sudan have carried out acts of aggression that are against international law. If the international community is beginning to take notice, part of the reason is because the wider public is aware of the violence as a result of the satellite images.

Now that there are open hostilities between the two Sudans, the international community is being forced to respond. The UN, the African Union and the US have all urged negotiations to resolve the problems.

Unfortunately, Sudan’s Bashir has shown that, with an ICC indictment already over his head, he is impervious to international pressure. He said this week he is not interested in negotiations and vowed war. He took rhetoric to a new level by repeatedly calling the South Sudanese “insects,” a chilling echo to the use of “cockroaches” in Rwanda during its genocide of Tutsis 18 years ago.

One factor that may help tip the balance toward peace comes from an unexpected place: China. Beijing has long been a supporter of Bashir’s Khartoum regime. China has protected Sudan at the UN and shielded it from Security Council sanctions over Darfur.

But now China is in an uncomfortable position. It is buying oil from both Sudan and South Sudan. And those oil shipments are threatened by the fighting. China has sold Sudan weapons, which are now being used against South Sudan and even endangering Chinese workers in South Sudan. This all came to light this week when South Sudan’s President Salva Kiir was in Beijing to strengthen trade relations between the two countries. However Kiir’s attention was diverted to the rumblings of war with Sudan. He cut short his Chinese visit to return to South Sudan.

China announced Wednesday that it will work with the US to try to bring both Sudans to the negotiating table. This is a significant change in the equation for Sudan and may well result in a new round of negotiations.

This time the international community should look for lasting solutions, not quick ones.