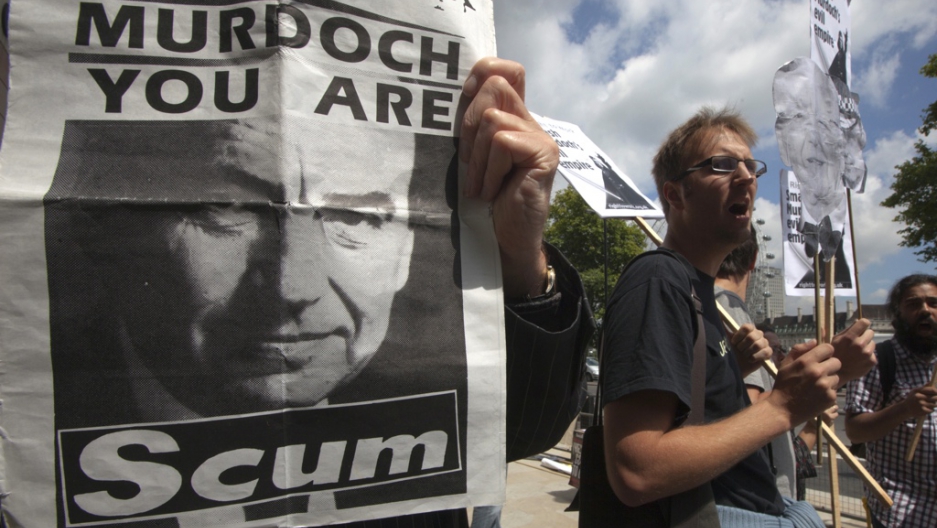 LONDON — Last summer when the phone-hacking scandal at Rupert Murdoch's News of the World erupted, the 81-year-old media-mogul became the center of the drama.

Summoned before a parliamentary committee to answer questions about the illegal practices that went on at his newspaper, he seemed like a man well past his prime, the Wizard of Oz after the curtain has been pulled back, doddering and not sure what to do. When he was assaulted by a fool wielding a shaving-cream pie, it added a touch of dangerous comedy to the high drama.

So Wednesday, when Murdoch was summoned to testify before the Leveson Inquiry, a quasi-judicial inquest on the "culture, practice and ethics" of the press, set up in the wake of the phone-hacking scandal, I decided to sneak in and watch act two of the drama.

It was exciting all right, but in a low-key way, more like a history seminar than a play. Oh, there was still a dramatic structure to the proceedings. The inquiry is quasi-judicial: Lord Leveson is a judge, the questions were asked by Robert Jay, a leading attorney, and answers were given under oath. But it was history rather than criminal activity that was being discussed.

For four-and-a-half hours — with a break for lunch and a couple of bathroom visits — Rupert Murdoch was led through a chronological reminiscence of his relationships with every British prime minister since Margaret Thatcher.

I knew the Australian-American was a titanic figure in modern business history, but by the time the first day's session was over it became clear he is much more than that. Murdoch is arguably the single most important figure in British public life over the last 35 years.

Murdoch is the constant at the top of Britain's power elite. Prime ministers come and go, but Murdoch is always there, talking to whoever is in Downing Street, having breakfast, tea or dinner with them, traveling to the prime minister's weekend home, Chequers, for visits. Before they become prime minister, young hopefuls fly to Australia or the Greek island of Santorini to meet the press baron in the hopes of impressing him.

According to Murdoch, the conversations are about the "issues of the day," never about the mere commercial needs of his media businesses. That he can make or break prime ministers, depending on how friendly they are to his interests, is a "myth," Murdoch insisted over and over during his testimony.

Biographers and historians will swoon over the amount of detailed memoranda and diary pages that were flashed on the courtroom screen during the session. It could take years in the archives for individuals without subpoena power to uncover them.

Murdoch sometimes seemed puzzled by the notes, would fall into silence, then come up with an amusing anecdote about what happened at a given meeting. But none of the stories contradicted the picture he wanted to create: a press baron like any other, a newshound who took advantage of his position to get personal briefings on world affairs from prime ministers, but someone who was scrupulous in not asking for business favors even as he was courted by governments for the approval of his papers.

I'm not sure many people here would believe the Murdoch version of events. Forty percent of all British newspaper circulation is controlled by Murdoch's company, News International. Newspapers may not have the ability to shape public opinion that they once did, but that's still a lot of influence for one newspaper owner.

Those who have been fired by Murdoch — and there are lots of them — took exception to his version of history, as well.

Thursday's newspapers in Britain were full of alternate accounts from those who were in the room with Murdoch. Sir Harold Evans, former editor of The Times, disputed every word Murdoch said about his firing.

Read more: Why Londoners are already bored by the Olympics

Former Prime Minister Gordon Brown called on the press baron to retract his claim that Brown said he would "make war" on Murdoch's businesses.

But the factual truth was never likely to come out of the testimony. Its real value as history and drama wasn't so much in the answers as in the man's presence. For those fascinated by power, it was a chance to see a person with longevity at the top and still in control — no matter what Murdoch watchers in New York say — of his business and the mental faculties to run it.

We day-dream about the powerful, we dream at night about them as well. What is it like to hold such influence and wealth? How do the powerful speak and act? We didn't learn much factual history from the evasions, but we learned a great deal from how he spun his version of the truth about Murdoch.

You have to be exceptionally brilliant to be that evasive, and to so convincingly weave a narrative so many of the participants don't recognize.

The point about power was made early by lawyer Robert Jay when he referred Murdoch to a new preface written by Evans to his best-selling account of working for Murdoch, "Good times, Bad Times." An updated edition was rushed off the presses last summer within days of the phone-hacking scandal erupting, and Evans, who now lives in New York, tried to explain how Murdoch's senior executives implemented his agenda without receiving direct orders to do so.

In the new preface, Evans writes of Murdoch: " … he exercises what the sociologist Max Weber defined as 'charismatic authority,' where policy derives from how the leader is perceived by others rather than by instructions or traditions."

Evans goes on, "He doesn’t have to give direct orders. His executives act like courtiers, working towards what they perceive to be his wishes or might be construed as his wishes."

It may have been beneath Murdoch's dignity to directly ask for business favors from the prime ministers with whom he was dining, but his senior execs, including his son James, were not above invoking his charismatic authority when making it clear what News International wanted. Prime ministers who had seen what happened to those who Murdoch's papers disliked were happy to oblige.

The same paragraph from the Evans book includes a reference to Hitler and the Nazi regime as a perfect example of an organization led by someone with charismatic authority. Evans says he is not making a comparison between the Third Reich and News Corp. I believe him. But the longer the editor's words remained up on the courtroom screen, the more it became clear that this is how power becomes malign. The courtiers anticipate the king's needs, and the king has no reason to question how or why things were done.

Until it is too late.

Murdoch returned Thursday morning to face further questions with similar combative evasiveness. My warning to any News Corp. shareholders contemplating trying to move him along: bring heavy weaponry, the man is in fighting shape and not ready to retire.