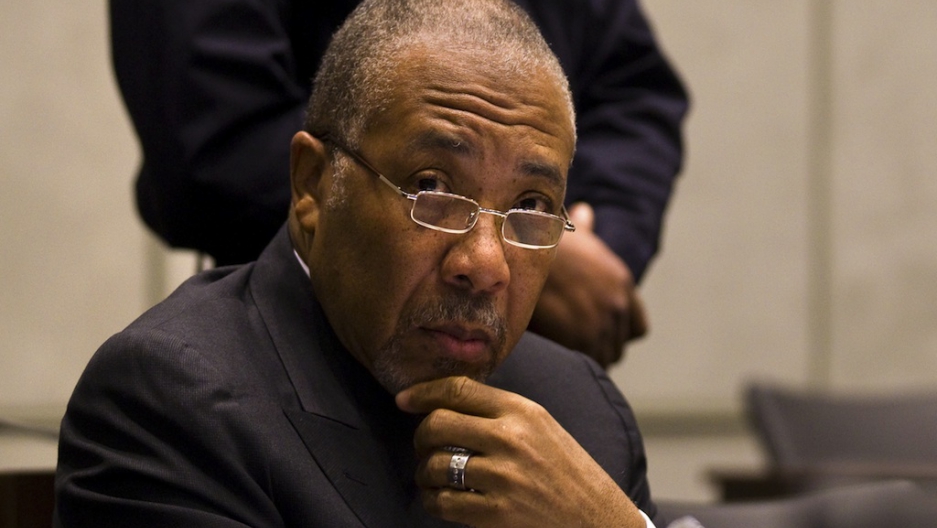 Former Liberian President Charles Taylor waits on Feb. 8, 2011, for the start of the prosecution's closing arguments during his trial at the UN Special Court for Sierra Leone.
Credit: JERRY LAMPEN
Share

At a trial in The Hague, former Liberian leader Charles Taylor has been found guilty of aiding and abetting war crimes during Sierra Leone’s decade-long civil war.

The three judges at the Special Court for Sierra Leone pronounced him guilty of aiding and abetting 11 counts of war crimes or crimes against humanity, according to The Daily Telegraph.

But Taylor was acquitted of criminal responsibility and "joint enterprise" on the same 11 charges, the BBC reports.

The warlord who became Liberia’s president was found guilty of trading diamonds from Sierra Leone for weapons that he channeled to RUF rebels during that country’s civil war, which from 1991 to 2002 was one of Africa’s bloodiest conflicts, according to The Financial Times.

Taylor was cleared of ordering the rebels' crimes, with the "substantial influence" he wielded over them falling short of effective command and control, according to The New York Times.

His sentence will not be delivered for several months, but he will serve his time in a United Kingdom prison. The Dutch government agreed to host his trial at The Hague as long as any jail term was served in another country.

He had pleaded not guilty to charges that included murder, rape, enslavement, mutilation, pillaging and conscripting child soldiers.

Thursday’s verdict is the first issued against a former head of state, in this type of court, on serious violations of international law. Taylor was first indicted on war crimes in 2003. The trial lasted three and a half years, and judges at the UN-backed special court have taken 13 months to reach a verdict.

"Taylor’s conviction sends a powerful message that even those in the highest level positions can be held to account for grave crimes. Not since Nuremberg has an international or hybrid war crimes court issued a judgment against a current or former head of state. This is a victory for Sierra Leonean victims, and all those seeking justice when the worst abuses are committed."

The Special Court for Sierra Leone was set up in 2002, at the end of the civil war in which some 50,000 people were killed and thousands more badly mutilated, with limbs hacked off.

Thirteen people were originally indicted, but three suspects died before their trials, and one remains missing.

Former Ivory Coast President Laurent Gbagbo is in jail awaiting trial at the International Criminal Court, and Sudanese President Omar al-Bashir has been indicted by the ICC on charges of genocide in Darfur.

But Taylor’s trial at The Hague continued for so long that media attention waned, except for a significant spike in interest when supermodel Naomi Campbell testified in 2010.

Campbell told the court she had received a gift of “dirty-looking” raw diamonds from unknown men, assumed to have been sent by Taylor, after a 1997 celebrity dinner hosted by Nelson Mandela in South Africa. The defense claimed this was only speculation.