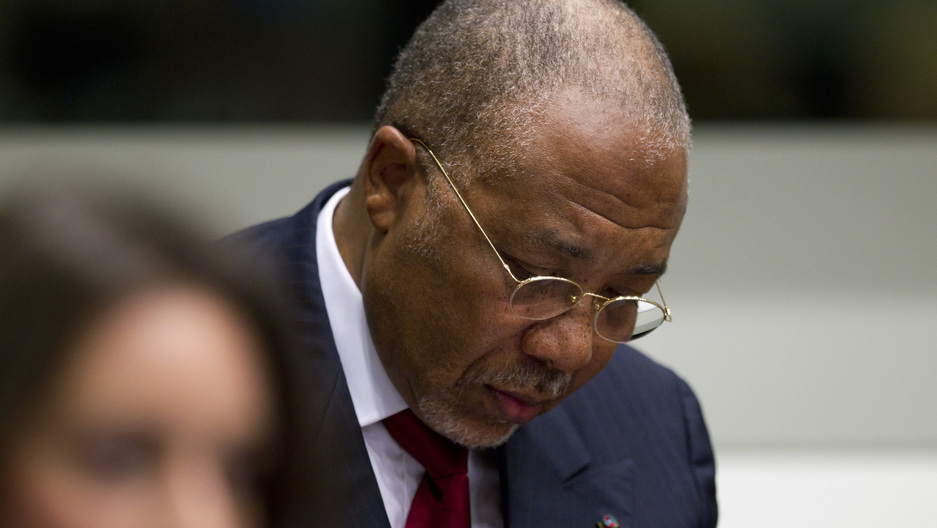 Former Liberian President Charles Taylor looks down as he waits for the start of a hearing to receive a verdict in the court room of the Special Court for Sierra Leone near The Hague, April 26, 2012. (Photo by Peter Dejong/Reuters.)

A court on Thursday ruled that Charles Taylor, the controversial and outspoken former president of Liberia, was guilty of aiding and abetting war crimes during Sierra Leone's Civil War at the turn of the century.

Taylor is the first natonal leader to be convicted in relation to war crimes since the trials at the end of World War II. Taylor's expected to face a sentencing hearing May 16 and be sentenced May 30. That'll be the concluding act of a nearly five-year long trial that examined the Sierra Leone civil war from 1991 to 2002 and the role Taylor played in allowing it to happen.

Specifically, Taylor was found guilty of selling diamonds and buying weapons on behalf of the Revolutionary United Front rebels, but was found not guilty of ordering the atrocities they committed.

"The chamber finds beyond reasonable doubt that the accused is criminally responsible... for aiding and abetting the commission of the crimes 1 to 11 in the indictment," Judge Richard Lussick told the Special Court for Sierra Leone, sitting outside The Hague, according to the BBC.

Elise Keppler of Human Rights Watch told the BBC this was an historic decision.

"This is an incredibly significant decision," she said. "Today is a landmark moment."

According to the New York Times, Taylor is the last of nine individuals to be setenced by the United Nations' Special Court for Sierra Leone in connected with the 90s era civil war. The rest of the trials were held in Africa, but Taylor's trial was moved to The Netherlands in order to try and prevent unrest in the country.

Still, the trial was followed closely by radio in Taylor's native Liberia, where his popularity has even grown.

There is no death penalty in international law, meaning the stiffest punishment Taylor could receive next month is life in prison, to be carried out in a British prison.