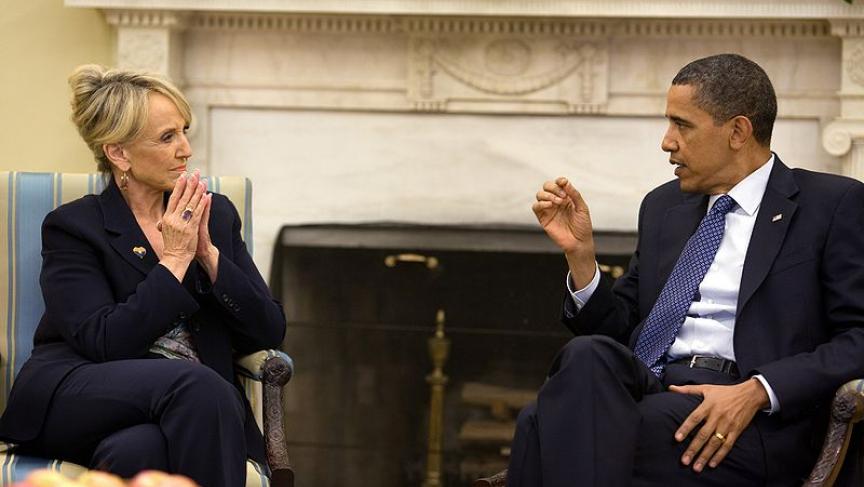 At a GOP debate earlier this year, Mitt Romney introduced his immigration policy: "self deportation."

"The answer is self-deportation, which is that people decide that they can do better by going home because they can't find work here because they don't have legal documentation to allow them to work here," Romney said.

The term "self-deportation" started out as a joke made by Mexican-American satirist Lalo Alcaraz. Since then, the joke has taken on a life of its own, becoming a catch-phrase for supporters of anti-illegal immigration legislation.

On Wednesday, the Supreme Court heard arguments over the constitutionality of SB 1070, Arizona's controversial immigration law that was signed in 2010. The law has yet to go into full effect, but Peter O'Dowd, news director at KJZZ in Phoenix, said self-deportation has already begun in Arizona.

"The Department of Homeland Security shows the unauthorized population in Arizona has fallen by about 100,000 since 2009, and supporters of the bill say this is clear evidence that 1070 has worked and worked well," O'Dowd said.

SB 1070 makes it a state crime for an alien to be in Arizona without immigration documents, and allows law enforcement officials to detain an individual when there is "reasonable suspicion" they are in the country illegally.

"The bill hasn't really gone into effect, only some provisions have. The immigrants who left often left because they felt the climate of the state was not in their favor, they didn't feel comfortable in the state," O'Dowd said. "Could you say the law has intimidated people that way? Yes. But as a practical matter, it hasn't done much legally."

O'Dowd has interviewed many immigrants in the southwest for the Fronteras Project. He spoke with a woman named Jossie who recently moved her family from Arizona to New Mexico.

"Jossie landed on her feet in New Mexico. She found jobs cleaning houses, her husband worked again as a caterer. He couldn't find work in Arizona when they lived here under SB 1070," O'Dowd said. "Jossie says life in New Mexico, you can't even compare it to life in Arizona. She used to have panic attacks in the car when SB 1070 was being debated heavily and passed at the state legislature."

Like Jossie and her family, many of the immigrants who are "self-deporting" from Arizona have fled into neighboring states.

"The immigrants that I spoke to say that people with families tend to stay in the U.S. to look for jobs," O'Dowd said. "Texas, is pretty high on the list. I also heard of people going to California, Nevada, North Carolina. Canada came up a bit. Did they go back to Mexico? Clearly they did."

On Monday the Pew Hispanic Center released a report saying the rate of immigration from Mexico to the US has fallen significantly in recent years.

O'Dowd thinks the anti-immigrant climate is not the only cause for this radical demographic shift. Jobs and the economy have also played a role.

"In Arizona our construction industry, our big industry, has been in the tank for years, we've just been bleeding jobs. So we don't know if immigrants here left because they couldn't find work, or because of 1070, or a combination of both," he said.

According to O'Dowd, immigrants and business owners alike will closely follow the Supreme Court's proceedings.

A majority of the Supreme Court seemed to show support for SB 1070 during Wednesday's oral arguments. No decision will be released for several months.

During the proceedings Arizona Governor and SB 1070 supporter Jan Brewer was asked if she would be comfortable if the estimated 400,000 undocumented Latinos living in Arizona were deported. According to media reports, Brewer paused before answering.

"If that's what it takes, I'll be comfortable with that," she said.

The reach of this decision could go far beyond that, even.