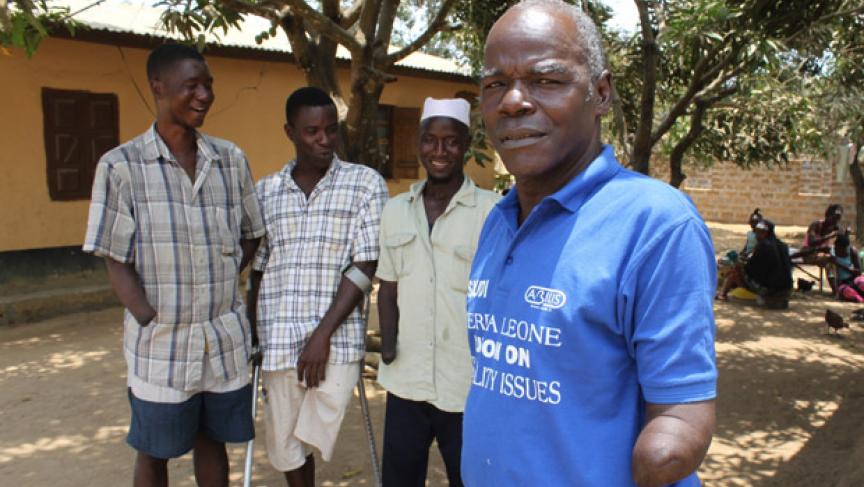 Edward Conteh (right), is the president of the Amputee and War-Wounded Association in Sierra Leone. He says thousands of people were killed, raped or mutilated in Sierra Leone's civil war. (Photo by Bonnie Allen.)

On Thursday, there will be a verdict in the historic trial of Charles Taylor.

Taylor, the former President of Liberia, is accused of orchestrating the brutal war in neighboring Sierra Leone, aiding frontline forces by sending cash and guns in return for diamonds.

The United Nations-backed Special Court for Sierra Leone tried Taylor on 11 counts — including murder, rape, and the use of child soldiers.

If convicted, Taylor would become the first African head of state to be found guilty of committing war crimes and crimes against humanity.

His trial has attracted international attention. But nowhere is it being followed more closely than in Sierra Leone, where thousands were killed or mutilated.

Edward Conteh is one of the survivors. Riding in a small yellow taxi in the capital Freetown, Conteh lifts his left arm — amputated just below the elbow — to gesture up the road.

“It’s up there where they amputated my hand," he said.

It was 1999. A rebel group called the Revolutionary United Front (RUF) had joined forces with a new military junta to invade the city, murdering and mutilating anyone in their path.

Conteh was hiding out with in a house with his nine children.

“There was no food, no water. I had a little girl, four years old, she started crying," he recalled.

After three days, desperate to feed his children, Conteh ventured out in search of food. A rebel soldier found him and chopped off his arm with an axe. Amputating hands was a trademark of RUF fighters.

But Conteh blames his misfortune on a man who never even set foot in Sierra Leone: Charles Taylor. Conteh calls Taylor the “Godfather” of Sierra Leone’s war.

“Why? Because he was the one sponsoring them," Conteh said. "If there was no sponsor, then these things should not have happened.”

Taylor is accused of backing and arming the rebels in Sierra Leone. The Special Court for Sierra Leone moved his trial to The Hague out of fear that it would destabilize the West African region.

The trial has lasted three years.

While it’s clear thousands of people were killed and children were used as soldiers and sex slaves, proving that Taylor was responsible is another matter.

Thirteen people were originally indicted by the war crimes court; eight have been convicted. Three have died, including RUF rebel leader Foday Sankoh and his deputy commander, Sam Bockarie. Eldred Collins, a founding member of the RUF, was arrested, and imprisoned for 16 months, but never charged. He insists Charles Taylor is just a scapegoat.

“He did not take any active part in the Sierra Leone issue. Charles was not here. He was in his own country. He never did enter,” Collins said, adding Taylor never had any authority over the RUF.

But that doesn’t convince people like Edward Conteh, who’s now President of the Amputee and War-Wounded Association.

On the outskirts of Freetown, Conteh visits with men who had both their hands chopped off during the war.

Among them is Mohamed Sesay, who testified at the Taylor trial.

He said RUF fighters asked him ‘long sleeves or short sleeves?’ to determine where on his arms they should swing the machete. The fighters told Sesay they would chop off his hands so he couldn’t vote for Sierra Leone’s president at the time, Ahmad Tejan Kabbah, known as “Pa Kabbah”.

Sesay said he’ll be glued to the radio on Thursday, hoping for a guilty verdict for Taylor.

Conteh plans to be in The Hague to witness the verdict in person.

“Charles Taylor should be locked in solitary confinement where he cannot breathe the free air that we breathe for the rest of his life," Conteh said.