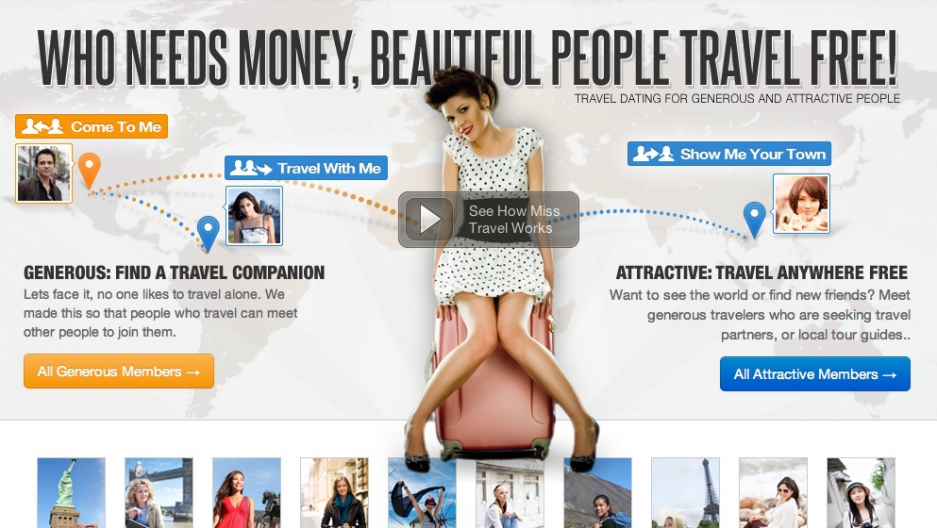 If you're beautiful, broke and want to travel for free, Lars is a 29-year-old New York lawyer who woud like to meet you. He'll fly you to New York, come visit or whisk you away on a dream vacation, and he's waiting for you on MissTravel.com.

So is Italiankisses, a 55-year-old from Tennessee and Dizzyindet, a 64-year-old business man from Michigan.

Misstravel.com is one of the latest and weirdest sugar-dating sites on the web. It looks to connect guys like Lars, Italiankisses and Dizzyindet with women like Nickilatina, a 20-year-old student from Colorado who says she's "ready for anything."

If you think this sounds a little like an escort service, you're not alone.

The Village Voice sums it up nicely: "a guy who ponies up a few grand to fly some stranger across the world has certain sexual expectations."

But founder Brandon Wade told the Village Voice the site isn't for escorts and that sex isn't guaranteed.

He suggested the site could actually protect members from running into trouble with prostitutes. "A lot of businessmen travel and end up going to nightclubs, and that's where trouble happens," he told the newsweekly.

In an interview with GlobalPost, Wade said his love of travel and his mother were his inspiration.

"I was a nerd growing up. I was shy, socially inept and didn't get my first kiss until I was 21," he said.

Wade's mother urged him to shift his focus from girls to school, saying his success and generosity would eventually get him the girls.

"My sugar dating business is my mother's advice put into action," Wade said.