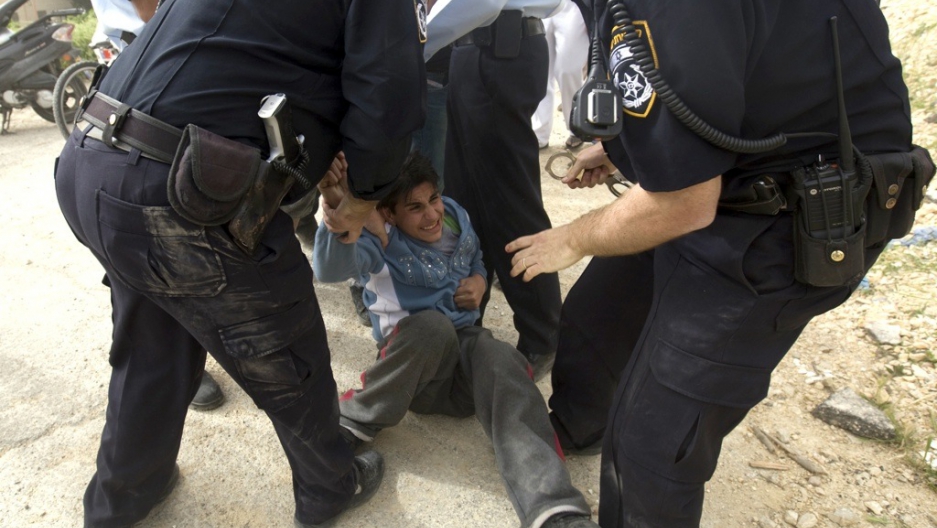 Israeli police arrest a young member of Khaled Natshe's family as they are forced to hand over their home to Jewish settlers in the Israeli annexed east Jerusalem neighborhood of Beit Hanina, on April 18, 2012.
Credit: Ahmad Gharabli
Share

It's easy to forget about the Palestinians.

Israeli Prime Minister Benjamin Netanyahu, many analysts believe, is focused on Iran primarily because he wants the world to forget about the Palestinians. If the international community forces Netanyahu to deal with the issue of illegal settlements, the logic goes, he will lose the base of his support on the right. And his re-election would be in jeopardy.

In fact, while the world follows every statement uttered by the prime minister about Iran and its nuclear program, Israel has quietly gone ahead and legalized three more Jewish settlements in the West Bank. All three are on land Israel captured in 1967, land the Palestinians want for a future state.

It's hard to get a sense of what this means on the ground, what it means for Israelis and what it means for Palestinians. But a poignant half-hour documentary published this week by Al Jazeera tries to do just that. It follows over a 2-year period the life of a 12-year-old Palestinian boy living in the contested East Jerusalem neighborhood of Sheikh Jarrah.

The boy, who lives in a house with his grandmother, where she has lived for more than 50 years, is now forced to share it with a group of Jewish settlers.

"The settlers see the issue from a religious perspective. They argue that this land is given to them by God and they will do whatever it takes to take it from us," the boy says. "I feel like anger, I feel so angered after that day."

"I hate them," he later says of the settlers. "I hate them for a reason because they are making our life the worst life in the world."

It's worth a watch: