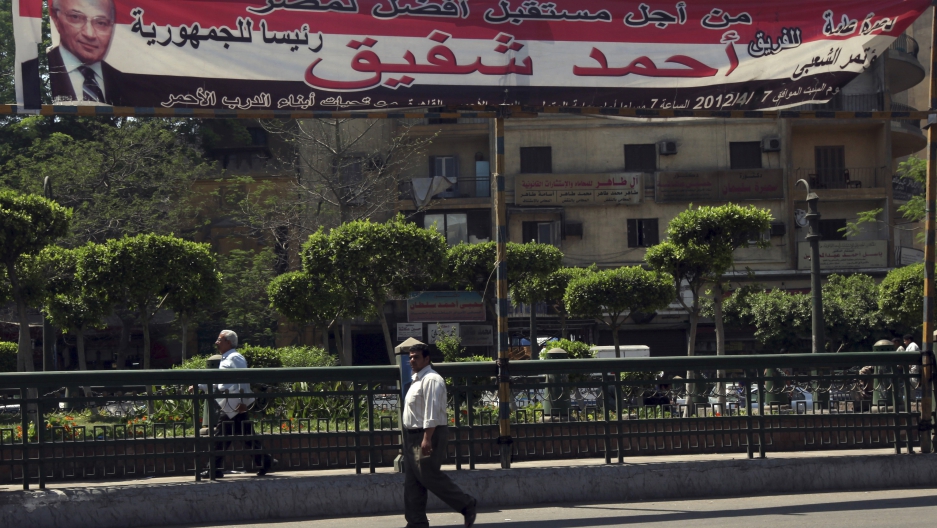 With presidential elections in Egypt scheduled next month and a constitution to write, questions are being asked about who is in charge of the transition from authoritarian rule.

In recent weeks, several leading presidential candidates, including one from the popular Islamist Muslim Brotherhood party, have been disqualified from the ballot.

“Sadly, it augurs well for the ruling junta and the increasingly bold coterie of reactionary forces in Egypt — and poorly for all the emerging political factions, from the secular revolutionaries to the most conservative Islamists,” journalist Thanassis Cambanis wrote recently for The Atlantic.

Another candidate was knocked off just this week, Ahmed Shafik, the former prime minister during the Egyptian revolution. A final list of candidates is expected to be released on Thursday.

Cambanis said Shafik's removal was perhaps the most democratic of all the removals, stemming from a decision by Parliament to ban figures from the old regime of President Hosni Mubarak from running for election.

"He was stricken because of his links to Mubarak," Cambanis said. "The previous front-runners who were kicked off the ballot last week were kicked off by the completely opaque and untransparent presidential election committee, whose decisions are subject to no appeal at all."

It's not even known all the members who make up that committee, but Cambanis said it's mostly anonymous bureaucrats. Their rules are somewhat derived from a fiat issued last year by the country's military rulers.

"They have no real inherent legal authority, or, at least, they have no authority that's legitimate in the popular eye," he said.

Their decisions aren't subject to any appeals process. Cambanis said the decision was popular with the people, because of the particular candidates that were ousted from the ballot, but no one has really stopped to consider the ramifications on the democratic process as a whole.

"(It's) a culture of fake rule of law," Cambanis explained. "That's how Egypt has been ruled forever. Essentially, there's a rule for everything and therefore somebody is always breaking the rules one way or another."

On the other hand, the ouster of the candidates has "put a stop to some shenanigans" that had been going on among leading candidates. In particular, Cambanis said, the Muslim Brotherhood had been displaying autocratic tendencies, unlike their pledge to be inclusive of all points of view and beliefs.

"That kind of behavior is something people were really aghast at, even people who support them," Cambanis said. "The disqualification of their leading candidate was viewed as a pruning back of the brotherhood's most extreme tendencies."

In general, the process of electing a new leader has been overshadowed, Cambanis said, by both the military ruling council as well as the bureaucrats who determine who can be on the ballot.

"One thing that we can't underestimate the risk of is that this entire transition, the presidential election that's coming up next month, the parliament that took office in January, are all actually under threat by a court decision that could come any day," he said.

In short, the court is considering whether the lack of a new constitution invalidates all of the transition steps taken so far. If the court rules that's the case, then everything returns to the way it was the day Mubarak stepped down.

"It's as if nothing had happened," he said.