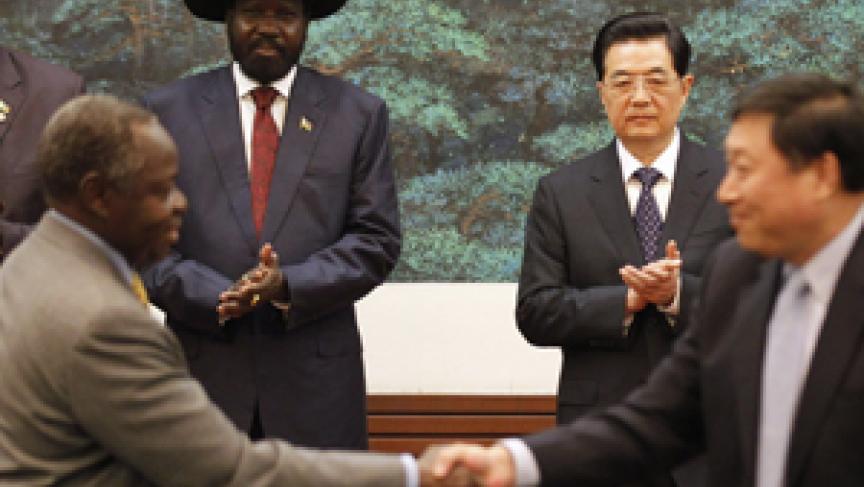 South Sudan President Salva Kiir Mayardit (L, red tie) and his Chinese counterpart Hu Jintao attend a signing ceremony at the Great Hall of the People in Beijing April 24, 2012. Hu told Kiir on Tuesday that he hoped for calm and restraint between the two Sudans, state television reported. Kiir's visit to Beijing comes days after he ordered troops to withdraw from the oil-rich Heglig region after seizing it from Sudan, a move that brought the two countries to the brink of all-out war. REUTERS/Kazuhiro Ibuki/Pool (CHINA - Tags: POLITICS)

Share
China is attempting a delicate balancing act in Africa. It's trying to mediate the explosive border dispute between Sudan and the newly independent nation of South Sudan. Others actors are trying as well. Today the African Union called for both parties to "formally convey their commitment" to peace within 48 hours. And the U-N Security Council has demanded an end to aerial bombardments by Sudanese forces. But the World's Mary Kay Magistad says Beijing is best placed to calm the dispute. China's main motivation, she says, can be summed up in one word: oil. "China gets 5 percent of its oil imports from Sudan. Now that's not a huge amount, but it's enough that it matters. It matters even more to Sudan, because 60 percent of Sudan's oil exports go to China," says Magistad.