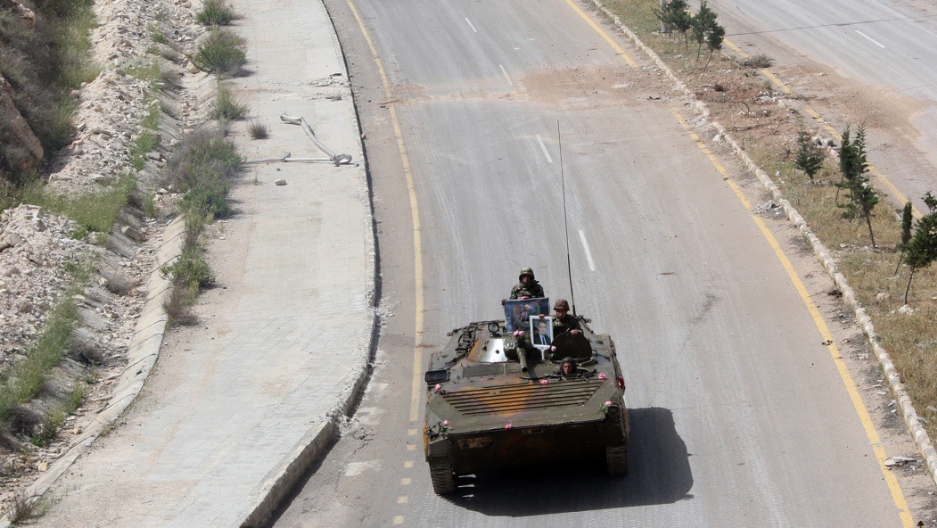 A Syrian tank in the southern protest hub of Daraa on May 5, 2011.
Credit: Louai Beshara
Share

DARAA, Syria — In the heart of Old Daraa — the tough, tribal, farming community on Syria’s southern border with Jordan — the Omari Mosque once stood as a symbol of resistance, a gathering point for those demanding the end of the regime, and a field hospital for when they received their reply.

Today, a year after GlobalPost first visited the city where Syria’s uprising began, the mosque has been transformed into a military base. Cement rooms have been built around its walls, home to dozens of soldiers.

The snipers who picked off civilians during the siege here last year still lurk atop the highest buildings, the regime’s many security agencies and the ruling Baath Party's headquarters.

Tanks and armored vehicles remain deployed not only inside the main city itself — in violation of the UN-Arab League cease-fire plan — but around most towns and villages where anti-regime protests have taken place.

On road signs, bridges, schools and clinics the graffiti slogan that children first scrawled back in March 2011 still stands: “The people want to topple the regime.”

More from GlobalPost: Syria: How it all began with a can of spray paint

Dozens of checkpoints still ring Daraa and divide its streets and neighborhoods. Soldiers and secret police mete out arbitrary humiliation, residents said, often abusing women or making locals wait an hour in the blazing sun while they leisurely finish their cigarettes and tea.

Locals said government services are running at a minimum and state employees now regularly work only one or two days a week. The shops are open again, but night markets are a thing of the past as shutters come down promptly at 7 p.m., just before the regular nightly clashes between regime troops and armed rebels of the Free Syrian Army.

Exactly one year after first visiting this city, which gave birth to the Syrian uprising, a GlobalPost reporter described Daraa as “dying,” a “demolished battlefield” where residents complain bitterly about the destruction of their livelihoods and discuss international military intervention, finding arms to fight and other means to bring down the regime.

As the first major city to suffer a full military assault, the situation in Daraa could foreshadow the fate that likely awaits Homs, Hama and other major protest centers if the regime re-exerts long-term security control over urban opposition strongholds.

“We know that if we give up now the regime will finish us later,” said Abu Rami, a member of the Zuabi tribe, one of the four big tribal families that dominate Syria’s south, a land of black basalt rock, known to locals as the Houran.

“To keep our revolution going now costs less than if we stay at home until the army or security men come and slaughter us like sheep.”

One of Abu Rami’s cousins was among the 15 schoolboys whom security forces arrested last March for spray-painting anti-regime graffiti. The boys were tortured, sparking the mass protest movement. A year later, the 40-year-old said that security forces have killed at least 70 members of the Zuabi tribe. Each one — under the local system of tribal law — represents a blood feud between the tribe and the regime.

To travel from his home in Old Daraa’s Arbaeen quarter into the city center means Abu Rami must pass through three checkpoints, his every movement monitored by snipers.

Protests still go on across the Houran most Fridays, but they are now usually small and unable to join together as they did this time last year.

And every weekend, Syrian activist groups report the endless morbid toll: Reem Abdul Rahman, 17, killed in Giza yesterday, a day after her brother; Adel Ghaleb al-Zuabi, died of wounds untreated in Taiba; Ali al-Turk, tortured to death after being arrested in Al Karak al-Sharwi eight days ago; an unknown male from Heet, detained and tortured to death; Mahmoud al-Badawi, also from Heet, whose body was discovered in the village of Sahm, bearing the scars of torture.

All of these fatalities were from Daraa, just one area of Syria. The respected Syrian Network for Human Rights (SNHR) confirmed their deaths on Sunday. All told, the SNHR found 25 people killed on Sunday in Syria, a modest toll by the standards of the past month.

Against this backdrop of everyday long-term violence, even overtly non-political residents of Daraa appear to be becoming increasingly radicalized against the regime.

Ali is a 45-year-old engineer who works for the state and lives comfortably in a big house with his wife, four children and elderly parents in Daraa’s Qusour district. For the past year, however, Ali’s middle-class status has taken a serious hit: With regular electricity blackouts lasting between 12 and 14 hours, Ali can’t keep fresh food in his fridge, and his children have to study by candle or flashlight.

If his parents need medical treatment they can no longer seek it for free at the state-run Daraa National Hospital because Ali said the facility has been taken over by the military for the treatment of injured soldiers, secret police and armed pro-regime thugs.

Instead, they must travel to Damascus and endure the one aspect of the regime’s vice-like grip on Daraa that irks Ali the most: checkpoints.

“I am an engineer and earn a good income and have no problems with the government. But when I cross any checkpoint, the security men deal with me as if I am an armed fighter,” Ali said. “They don’t respect anyone: The elderly, women, the educated, they see all people as nothing.”

Last week, as he was trying to cross a checkpoint, Ali said a young member of the secret police took his ID and slapped him in the face with it.

“He said, ‘I’ve seen you before.’ He was joking and making fun of me. I felt so angry, but what can I do? It is very easy for him to shoot me and say that I am an armed fighter. No one will investigate or hold him accountable.”

As well as IDs, residents of Daraa wishing to travel north to the capital must now show security men at checkpoints their recently paid electricity, water and phone bills, a move by the regime to counter the spread of civil disobedience in protest centers like Daraa and Hama where residents began burning their municipality bills.

With so many checkpoints choking it off, Ali said many large food companies no longer send their trucks to Daraa, creating spiraling inflation on basic commodities.

Many of Ali’s neighbors have moved to the slum-like illegal housing areas that have sprung up around Damascus over the past decade. Ali chose to stay in Daraa to continue working his government job but makes regular trips to Damascus to buy dry foodstuffs rather than pay exorbitant local prices.

And every time he travels he faces the same checkpoint humiliation.

“The military and security crackdown pushed the people to be more angry and radical but without solving any problems,” Ali said. “Personally, I used to be very supportive of Bashar al-Assad, but today I am not.”

A GlobalPost journalist, whose name has been withheld for security reasons, reported this story from Daraa, Syria. Hugh Macleod contributed reporting from Beirut, Lebanon.