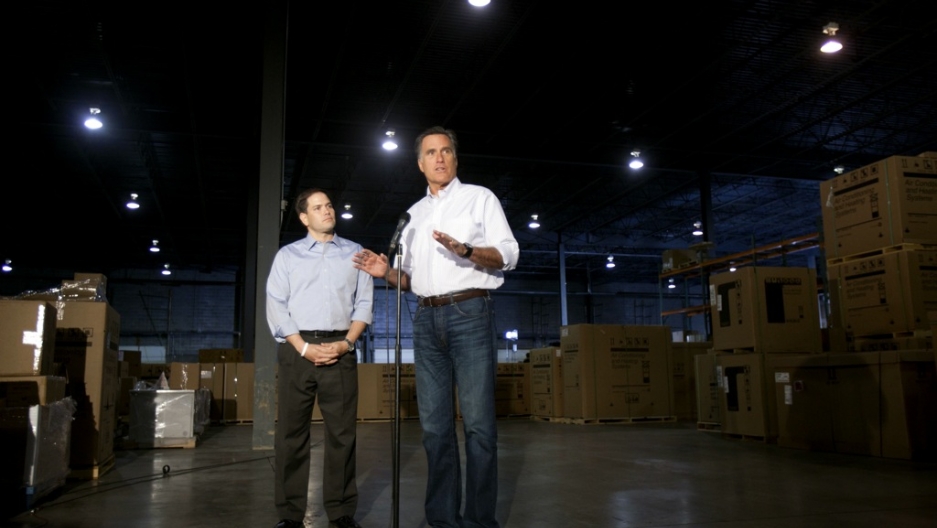 On Monday, the presumptive Republican nominee for president, Mitt Romney, took the stage with rookie Sen. Marco Rubio in Chester Township, Pennsylvania, for what could likely be the first of many more meetings together. Their town-hall style gathering inspired, "a jolt of energy aimed at an uninspired Republican base and a message of inclusion to Latino voters," according to the Los Angeles Times.

The first-term senator from Florida may play an integral role in the race for the presidency. The "conservative darling," as the LA Times called him, has become one of the party's most prominent Latino leaders, despite only having two years of experience under his belt. His support could be key in winning the Latino vote — a demographic that experts believe could determine which candidate takes the general election in November, the LA Times said.

Rubio has emerged as a leader in the attempt to revise the nation's immigration policy. His latest undertaking in the senate has been creating an alternative to the DREAM act, Fox News reported.

The Romney camp has yet to support the proposal, claiming that it is still studying the bill.

The primaries were not kind to Romney with respect to Latino voters; as his stance on immigration moved further to the right, Latino voters "have drifted away from the party in droves," as the LA Times put it.

Some claim that by supporting DREAM 2.0, Romney could win over a large portion of the Latino vote. Others — the LA Times adds — worry that Rubio's legislation could alienate hard line conservatives.

Others have gone a step further, and recommended that Romney put Rubio on the GOP ticket. They believe his youth and Latino background could inspire blocks of voters that otherwise would not have voted for Romney, according to Sara Murray of The Wall Street Journal.

While Rubio has garnered plenty of support from the Tea Party, according to Reuters, many Republicans believe that his lack of experience should disqualify him from receiving the nomination.

Rubio himself has stated that he will no longer discuss the 'veepstake parlor game' with the press; only a week after he committed what many considered was a Freudian slip when discussing the issue.

But whether he is actually interested in the position is a whole different story.

After all, if he hasn't flat-out denied whether he would join the Romney ticket if asked, we can only expect speculation to continue.

See Rubio's response below when CNN asked whether he'd accept a spot on the 2012 ticket: