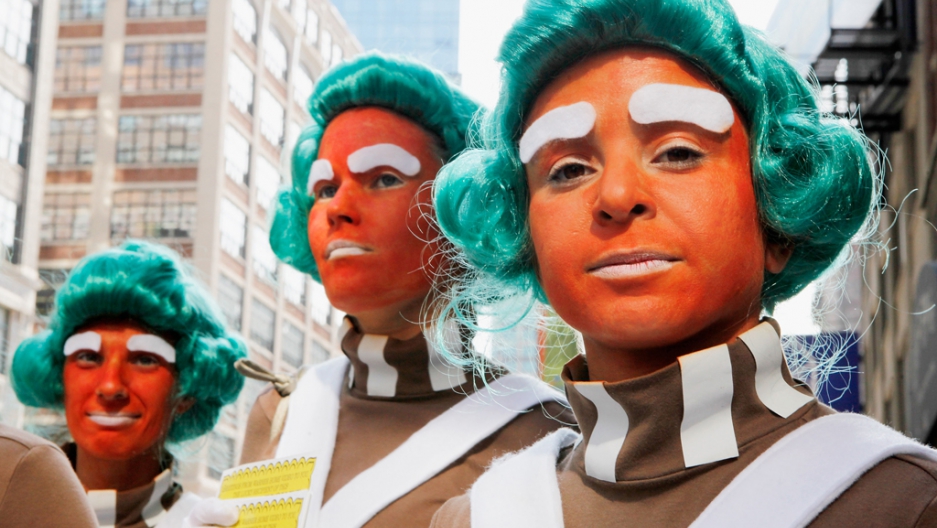 BALI, Indonesia — Indonesia’s tropical climate might not be the obvious choice for chocolate producers — not to mention the fact that the country's 240 million citizens have traditionally favored robust spices and raw chili over delicate sweets.

But it’s here amid the palm trees of this famed resort island that Benjamin Ripple, Frederick Schilling and their Big Tree Farms company have opened up a chocolate factory that even Willy Wonka might envy.

It’s notable for several reasons. First, because it’s housed inside the world’s largest commercial bamboo structure. Next because it’s producing “raw” chocolate, which carries major health benefits and is beloved by fitness gurus.

“It can also make you high,” Ripple says as a disclaimer before leading guests on a recent taste test.

What stands out to competitors and consumer analysts, however, is that Big Tree Farms is targeting Indonesians.

“We would love to find our primary market in Indonesia,” says Ripple, a thin, energetic surfer type who walks around the factory’s office in bare feet, shorts and a cotton T-shirt.

Indonesians are starting to refine their taste for quality sweets, he continues. And that means huge potential in a country with a rapidly growing economy and a consumer base not far behind Asia’s biggest markets.

Last year chocolate sales in Indonesia jumped 25 percent, to $1.1 billion, roughly on par with China but above India’s $744 million in sales, according to market research firm Mintel.

Sales are expected to further increase to $1.2 billion this year as Indonesia continues to see growth averaging more than 6 percent and as air-conditioned malls flourish, noted Marcia Mogelonsky, a market analyst specializing in confectionery at Mintel.

For now, the majority of sales in Indonesia come from domestic companies, such as Ceres and Monggo, a local chocolate maker based in Central Java. But competition could be heating up, with a host of international consumer goods companies scrambling to target a substantial and growing middle class.

Ripple says Big Tree Farms is still formulating its marketing strategy for the country. While the raw angle will likely sell well in the United States, the trend of raw foods and "super foods" — or foods, like blueberries and kale, that are naturally calorie sparse and nutrient dense has not yet arrived in Indonesia, he says.

The chocolate trend, however, is settling in.

In Menteng, a posh Jakarta neighborhood where former President Suharto once lived, glass plates of perfectly arranged pralines sparkle under lights at Dapur Cokelat, which means Chocolate Kitchen in Indonesian. After school, children pour in to share slices of fudgy cake and wash them down with cold chocolate drinks. The shop has been running since 2001, but changing tastes and fatter incomes have sparked a jump in customers.

Between 2010 and 2011, the number of visitors increased by 35 percent, says Adithya Pratama, the marketing manager at Dapur Cokelat, a family business started by his parents in 2001.

“Years ago chocolate was seen as a luxurious product, something you could only get in a hotel,” says Pratama. But increasing use of local cacao and a wider range of manufacturers has made it more affordable.

Dapur Cokelat now has 11 stores in three cities. Pratama, who studied to be a pastry chef in Sydney, helps create products that will appeal to the tastes of Indonesia’s middle class.

In addition to standard chocolate cakes and pralines, the shop now sells Ting-Tings, which are ginger candies coated in chocolate, and takes specialty cake orders — a recent one was made to look like a cone of yellow rice traditionally served during birthday celebrations.

More from GlobalPost: Is chocolate recession-proof?

The taste for chocolate is becoming so widespread among the mid-income segment — those who spend between $2 and $20 a day, according to the World Bank — that many simply shrug when asked why they like it.

“Everyone who is introduced to chocolate will like it,” says Kinan Kinanti, a 25-year-old journalist for an online magazine.

To be sure, Ripple says Big Tree Farms will produce both raw and classic chocolate. The most expensive bar — an organic-certified dark chocolate — will be around $2.75, almost half of what it will sell for on the US market. Its classic chocolate bars will be less expensive and will be labeled by their origin and flavor, fruity Aceh, for example.

Big Tree Farms, which got its start in sustainable farming, is currently the only company in Indonesia producing organic chocolate from the bean to the bar, and the only chocolate-maker that offers local farmers an above-market price for their products.

On the sourcing side there is more competition. Top chocolate maker Barry Callebaut is setting up a cacao grinding plant in Sulawesi and agribusiness giant Cargill has expressed interest in building a cacao-processing plant there too.

“Indonesia has tremendous potential to produce fermented beans and sell those into the premium dark chocolate market,” says Ripple, whose company sources its beans from Aceh, East Java, Central Java and Bali.

But first, it will have to overcome the flavor factor.

“A lot of this product was planted for volume; a lot are not suitable for chocolate,” Ripple explains, saying many grinders don’t want Indonesian beans because their buyers want “a classic cacao taste.”

The global standard for cacao flavor comes from the Ivory Coast and Ghana, the world’s two biggest producers. Ripple describes the flavor as a “mass, blocky chocolate,” like a Hershey bar. But the beans in Indonesia, producer No. 3, are cheap butter beans that typically go into grinders to be used for cocoa butter and powder.

“It’s not that the quality is inferior; it’s just not the standard.”

His company is trying to change that. With a rising middle class and changing tastes among consumers, he says now is the time to start processing high-quality chocolate at its origins.