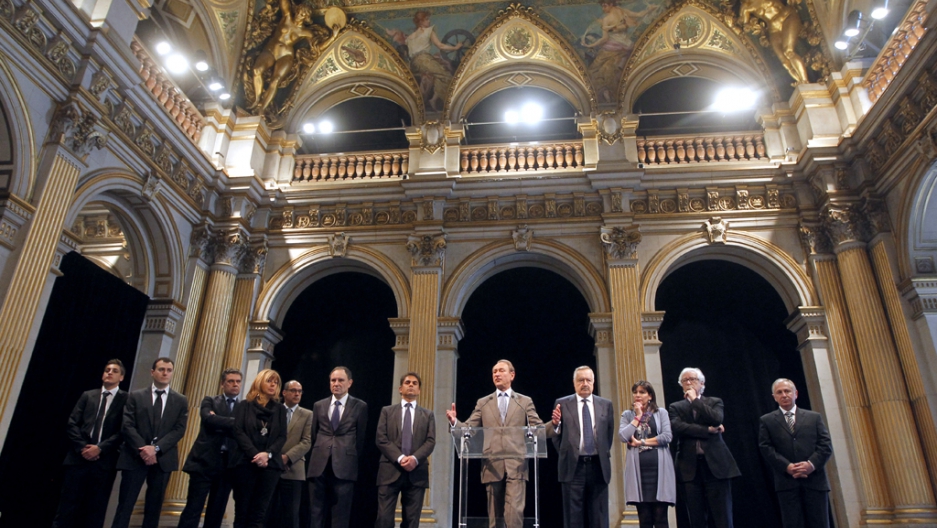 Paris mayor Bertrand Delanoe (C) delivers a speech during a ceremony to commemorate the Armenian Genocide for the 97th anniversary of mass killings of Armenians under the Ottoman Empire, on April 24, 2012 in Paris.Ara Toranian and Mourad Papazian, co-presidents of France's Armenian Organizations Coordination Council (CCAF), Armenia's ambassador in France, Viguen Schapira, Paris deputy mayor Anne Hidalgo and Pierre Schapira, Deputy Mayor of Paris with responsibility for international relations and the French-speaking World. Armenians regard the 1915 massacres as genocide and many countries, including France and Canada, have officially recognized it as such.
Credit: Pierre Verdy
Share

The Armenian genocide was commemorated around the world on Tuesday, the anniversary of the beginning of the 1915 genocide that took the lives of an estimated 1.5 million Armenian people living in the eastern Ottoman Empire by the Young Turk regime.

A remembrance service was held in the Armenian Patriarchate of Jerusalem's Old City on Monday night, in addition to a requiem service and holy mass in city's St. James Cathedral Sunday morning, the Jerusalem Post reported.

"This day will pass, and we will carry on with our daily lives; however, there are moments in the spinning of times when we are especially united, unified, indivisible and indestructible," Armenian President Serzh Sargsyan wrote in a letter in honor of the remembrance, Armenian news source HETQ Online reported. "This day is one of those moments when the entire nation rallies around the unification of our homeland."

However, while Armenians and much of the international community has accepted the mass murder of the Armenians as genocide, the Turkish government still denied the magnitude of the mass killings, and reject responsibility for the slaughter of Armenians.

Thousands of people took to the streets in Los Angeles to protest the Turkish government's denial, ABC News Channel 7 reported.

As Mikaela Luttrell-Rowland, the Academic Program Liaison at Clark University's Strassler Center for Holocaust and Genocide Studies, wrote in the Huffington Post, Turkey's refusal to acknowledge the atrocities is a persistent issue that makes coming to terms with the genocide even more difficult.

"This denialism — and the re-writing of history their stance entails — has ramifications which command our attention. It creates everyday silences that make life difficult for the generations [of modern Armenians]," wrote Luttrell-Rowland. "...The Turkish state has obfuscated information — deliberately concealing or destroying artifacts. Hidden files, barred access, and lack of transparency make the Armenian genocide an ongoing challenge for historians and educators — and for the survivors, children, and grand-children of survivors."

President Obama has also stayed silent, choosing for the fourth year to not utter the word "genocide" in connection to the Armenian killings despite his promises to the contrary, ABC News reported.

"The President’s capitulation to Turkey – on this, the last April 24th of his term – represents the very opposite of the principled and honest change he promised to Armenian Americans and to all the citizens of our nation," said Ken Hachikian, the chairman of the Armenian National Committee of America, in a statement. "President Obama’s pledge to recognize the Armenian Genocide stands today as a stark lie, a painful promise etched on the hearts of all who had hoped and worked for change, but who, today, have been betrayed by a politician who failed to live up to his own words.”

Despite his silence, President Obama yesterday announced the creation of a committee called the “Atrocities Prevention Board” at the Holocaust Memorial Museum, which aims to prevent and stop genocide and other mass atrocities around the world, according to the National Review.

More from GlobalPost: Elie Wiesel: Holocaust 'could have been prevented' (VIDEO)