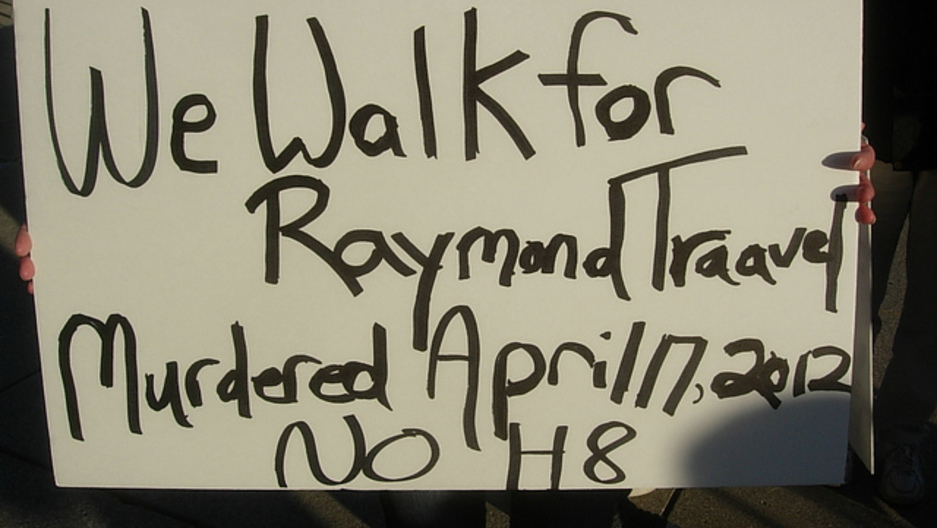 A member of the Halifax community shows their support for Raymond Taavel. (Photo from Flickr user Andres Musta.)

Gay rights activist Raymond Taavel was murdered outside of a bar in Halifax Tuesday morning.

Andre Noel Denny is accused of beating Taavel to death after Taavel reportedly tried to break up a fight between Denny and another man outside of Menz Bar.

"He was extraordinarily positive and upbeat," Hugo Daan, a close friend of Taavel, said. "He always tried to take any negative comment and turn it around into a positive opportunity. He was just unfailingly kind."

Many members of the Canadian community were shaken by the news of his death. A vigil was held outside of the Halifax bar. Nearby restaurants and stores hung rainbow flags in his honor.

"It doesn't surprise me. The neighborhood where this happened was is the northend of Halifax. It's a remarkable neighborhood. It's very vital, and there's also a lot of social service agencies on there. One of those agencies, a northend health clinic, the executive director called up a local queer-friendly bookstore that sells rainbow memoribilia and bought up their whole stock of rainbow flags and made sure that every business on Gottigen Street would have one," Daan said. "And then people took that even further and started a Facebook group, getting people to put rainbow flags in their windows, and now you see them popping up all across the city."

Daan said he met Taavel at a Halifax Pride meeting in a coffee shop in 2004. Daan said Taavel, a former chairman of Gay Pride events, was welcoming of him while others ignored him.

Denny, the accused murderer, has been institutionalized for the past year because of mental illness. He have previously faced charges of assault, in Sydney, Nova Scotia, but was found not criminally responsible.

"He was apparently diagnosed with paranoid schizophrenia. It was a severe mental illness," Daan said. "Initially, there's a lot of anger when this happens, and one thinks of homophobia. Now you can't. If somebody is that wounded in their mind and if they're influenced by homophobia, it's not really their fault."

Daan said he hopes Taavel's activism will continue after his death, but he wishes issues like those Taavel campaigned for were given as much attention before tragic events occured.

"It's wonderful to have this opportunity to talk about his life and to share it. He was a great guy, but it's also very hard as LGBT people that we only ever seem to get on the news when something awful has happened to us," Daan said. "And we're in our communities 365 days a year. It would be great to tell positive stories about people like Raymond while they're still with us."