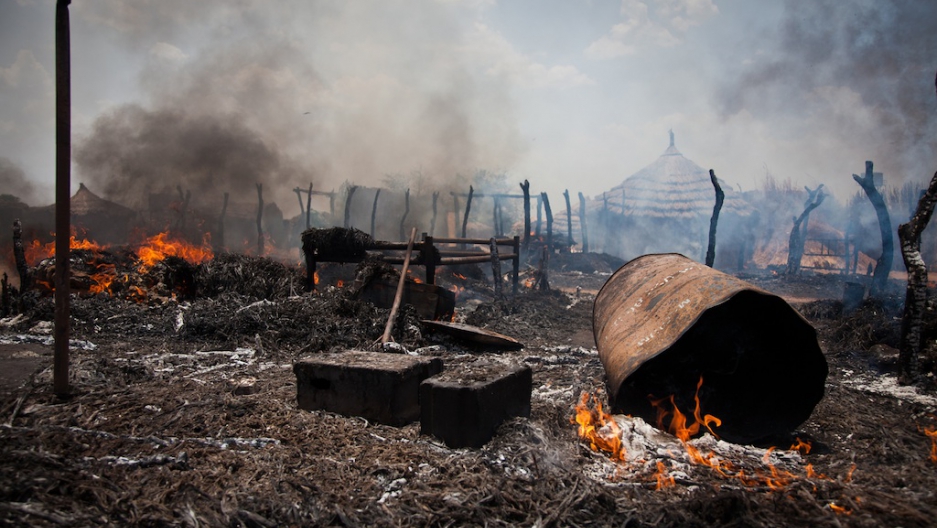 Sudan and South Sudan remain at each other's throats, and war between the two remains a very real threat.

New satellite photos show evidence of wrongdoing by both Sudan and South Sudan along the troubled border between the two countries. The photos are in the Satellite Sentinel Project report: Escalation: Evidence of SAF and SPLA Combat Operations.

Despite South Sudan's withdrawal of its army troops from the Heglig oilfields, Sudan has continued to attack sites in South Sudan, charged the South Sudan government.

On the other side, South Sudan looted the town of Heglig, according to the satellite photos.

New images published today by the Satellite Sentinel Project confirm that Sudan has dramatically increased the number of military strike aircraft at two airbases near the contested border. Many military airplanes are in range to fly deep into South Sudan, said the satellite project.

The images also show craters consistent with reports that Sudan Armed Forces bombed an apparent civilian area near a strategic bridge in Bentiu, the capital of Unity State, South Sudan, said the satellite project, showing DigitalGlobe satellite imagery that was analyzed by the Harvard Humanitarian Initiative.

The satellite project has also identified visual evidence consistent with reports of looting by Sudan People’s Liberation Army (SPLA) and southern-aligned forces at a Sudan army military base in Heglig. The destruction or seizure of enemy property may violate international law governing the conduct of land warfare, said the project.

“The increased concentration of Sudanese army and air force firepower within striking distance of its border with South Sudan signifies that we may not have yet seen the worst of the fighting," said Enough Project co-founder John Prendergast. "It is imperative that crisis diplomacy be enhanced, in particular by finding a way for China and the US to work together in support of a negotiated stand-down.

"Ultimately, the only way full-scale war will be averted is if a comprehensive peace deal can be struck that addresses the issues dividing Sudan and South Sudan, creates a process to address the escalating civil war within Sudan, and ends proxy support to each other’s rebels," said Prendergast. "If any of these issues is left unaddressed, the Sudans will continue to burn.”

Harvard Carr Center for Human Rights Policy Executive Director Charlie Clements said: “This report documents evidence of disregard for basic laws of war by all parties to this widening conflict. All parties have responsibilities under international law to protect civilian lives and property.”