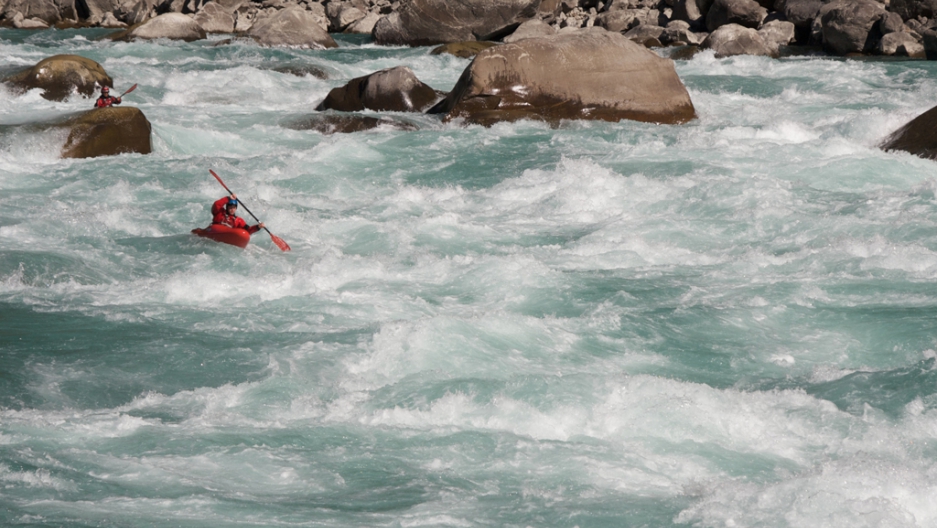 PASIGHAT, Arunachal Pradesh — “You see that spot in the river there?” asks Tajir Tali, a rafting, trekking and fishing guide with Donyi Hango Tours & Travels, a locally owned firm. “That's where Roland flipped last time he was here.”

From a ridge overlooking the confluence of the Siang and Siyom rivers, near the East Siang district headquarters in the town of Pasighat, the water looks like a twisted blue rope — fast, yes, but without the foamy white you'd expect in a tricky passage.

If it rolled Donyi Hango's American partner, though, it must have some hidden power. An experienced paddler, Roland Stevenson has guided countless kayakers and rafters down Arunachal's many rivers, and notched up several “first descents.”

The endlessly braiding blue beckons, infinite and mysterious. Even more so because both the Siang and Siyom — as well as many other rivers in India's wildest, least-populated state — may soon be tamed, or killed, by more than 150 dams built to generate hydro-electric power.

Read Dam Nation Part 1: How many dams can one state hold?

“If the lower and upper Siang dams were to be built, almost all of the whitewater would be [lost] underwater,” said Stevenson, whose company, River India, runs up to 10 commercial rafting and kayaking trips in Arunachal every year. “Not only the whitewater, but some of the most beautiful gorges in northeast India.”

Protected, and neglected, by the government of India for the past 60 years, Arunachal Pradesh boasts some of the country's last surviving wilderness, miles upon miles of mountains and forests, along with some of the world's best and least explored whitewater.

Today Arunachal is sprinting in a breakneck race to dam its rivers. Dam proponents promise that the state will “float in hydro dollars like the Arab countries are floating in petro dollars,” as the state power secretary wrote in 2005. But paddlers, trekkers and birders say the dams will kill the eco- and adventure tourism business before it can prove its potential.

“Eventually there won't be any river-related activity. It will be totally closed,” said Jibi Pulu, a businessman from the Dibang River Valley's Idu Mishmi tribe who operates a lodge called the Mishmi Hill Camp on the banks of the Ezefra River.

Anti-dam activists have their work cut out for them. New scientific evidence shows that some hydro-electric facilities produce greenhouse gases of their own. And in Arunachal Pradesh, any reduction in carbon dioxide emissions must be weighed against the destruction of thousands of acres of dense forest that is today converting that CO2 into oxygen.

Moreover, environmental activists say that India could even eliminate the need for many of these dams — or the coal-fired power plants they're meant to replace. Due to long, poorly maintained transmission lines and shoddy equipment, India's annual distribution losses hover around 30 percent — which means that a third of the power India generates is lost before it reaches the consumer.

But it's an uphill battle. Despite new questions about how green they really are, the dams look clean when the only alternative is India's dirty coal. And hydropower has significant economic appeal for state administrators. India's massive demand for electricity has already allowed Arunachal Pradesh to collect nearly $300 million in upfront payments from would-be dam builders. And because the state has virtually no industry and only 1.5 million people, the sale of electricity to other parts of India would provide a significant source of continuing revenue.

Read Dam Nation Part 2: The threat to the environment

Nevertheless, locals who feel their cultures will be destroyed, tour operators and adventurers say the state can meet its power needs and even generate some income through electricity sales with only a few small dams. And dam opponents question whether the huge number of dam projects proposed for Arunachal Pradesh will really benefit the state or its people.

Non-profits like International Rivers argue that the electricity generated by the projects will likely be sold directly to industry and remain too expensive for poor people – though the terms of most or all dam contracts promise 12-15 percent of the output to the state, free of charge.

Similarly, local tribal organizations maintain that revenue generated for the state benefits politicians more than people – pointing to estimates that suggest only 10 percent of the funds Arunachal receives from the central government ever make it to the grassroots, with the rest ending up in the pockets of politicians.

Meanwhile, eco- and adventure tourism — though they don't generate millions of dollars — bring money and jobs into the mountains and villages where they are needed the most, tour operators say.

Stevenson's company, River India, for example, was recognized with Travel & Leisure's Global Vision Award in 2010 and named a finalist in National Geographic's Geotourism Challenge in 2009 for its efforts to create jobs for locals and raise awareness about conservation along the Siang. And locally based, tribal-owned tour companies like Donyi Hango have also reaped benefits.

“All our logistic works and everything is taken care of by local people,” said Vikram Joshi of New Delhi-based Aquaterra Adventures — the Indian-owned company that ran the first commercial rafting trip in Arunachal in 2002. “On a lot of our trips we try to take along local young people who are interested in learning what rafting is all about.”

How much impact can tourism have? About twice the size of neighboring Bhutan, and with twice the population, Arunachal Pradesh has many of the same attractions. Apart from whitewater, it boasts beautiful mountains and breathtaking forests for hikers and birdwatchers.

And, like Bhutan, where the king barred television and the internet until 1999 and still requires locals to wear the traditional gho and kira in public places, Arunachal remains untouched by the homogenizing influence of globalization in many respects.

The relative isolation of its many indigenous tribes means that — for now — their cultures are still mostly intact. Television and the internet aren't banned here, but in many villages – out of range of broadcast signals, cell towers and, sometimes, electricity — they might as well be.

Even in modernized areas you can still catch a glimpse of local hunters armed with bow and arrows, witness dramatic costumed dances associated with animist festivals and sample local delicacies like fried caterpillars and boiled rat — if you're so inclined. And, unlike anyplace else in India, you can do it virtually alone.

Foreign tourists weren't allowed here at all until 1992. Only in 2008 was the maximum stay increased to 30 days from 10, and a special permit that costs $100 is still required. For those reasons and more, fewer than 20,000 foreign tourists and a few hundred thousand Indians from elsewhere in the country (including business travelers) have visited Arunachal Pradesh since 2008. Moreover, the vast majority head straight to Tawang — which boasts the largest Tibetan monastery outside Llasa — ignoring the rest of the state.

In other words the state is a rare, unspoiled gem in a region suffering from careless, breakneck development. There are no pestering touts, no postcard shops and no backpacker cafes. But the trouble is that there are practically no roads or hotels, either, which is why the state's tourism potential mostly lies untapped.

While the economic benefits of tourism are unlikely to match dam revenues, advocates argue that the state could dramatically improve earnings from visitors, while preserving the pristine environment and local culture. Moreover, tourism dollars go directly to locals, while dam revenue goes to the government to use for projects like schools, if they actually do so.

In 2011, 64,000 foreign visitors brought nearly $50 million in for Bhutan — which boasts pristine blacktop highways and posh hotels like Aman Resorts' five Amankora lodges. In contrast, though no financial statistics are available, 5,000-odd foreign tourists most likely brought in significantly less than $5 million for Arunachal Pradesh — which a tourism consultancy report described as having only 36 hotels, but “none of any star quality.”

Along with all the dams, the government of India is finally funneling money to develop tourism infrastructure in the state.

But some locals complain that the projects envisioned by the bureaucrats are not geared to Arunachal's ecological and cultural strengths — as exemplified by some $600,000 earmarked for a convention center in Mechuka, a remote small town near the disputed border with China.

“All the politicians, all the bureaucrats, all the big shots, directors, they want a bigger margin,” explained lodge operator Pulu, who has tried and failed to get funding for indigenous tourism projects.

“If they go to the center to put a proposal, it should be 5 crores, 3 crores [$1 million-$600,000]. Once that fund comes, there is nothing of Arunachali architecture or Arunachali culture related," he said. "These are concrete structures, nothing to do with the ambience, nothing to do with Arunachal. How can you sell a product like that?”

For paddlers and other adventure tourists, though, Arunachal's weaknesses can easily be turned into strengths with a little promotion and the addition of a few bridges and all-weather roads, travel professionals believe.

Hotels or no, Outside Magazine featured rafting and kayaking the Siang River among its best adventure trips in 2010. It made National Geographic's Ultimate Adventure bucket list this year.

Birders, trekkers and paddlers are catching on, too, according to Ozing Dai, the local tribesman who started Donyi Hango Tours & Travels 18 years ago and now handles permits, lodging and logistics for River India and other adventure companies. Over the past five years, his business has nearly doubled, with almost all of the increase coming from the state's whitewater.

“The Upper Siang is widely regarded by some of the world's top kayakers as one of the most fun, challenging and rewarding sections they've ever run,” said River India's Stevenson. “For tourists, the opportunity to participate in a multi-day expedition down a river that has huge beautiful white sandy beaches to camp on is unparalleled.”

The question is: For how long? Better book your flight.

Back to the Dam Nation series landing page.