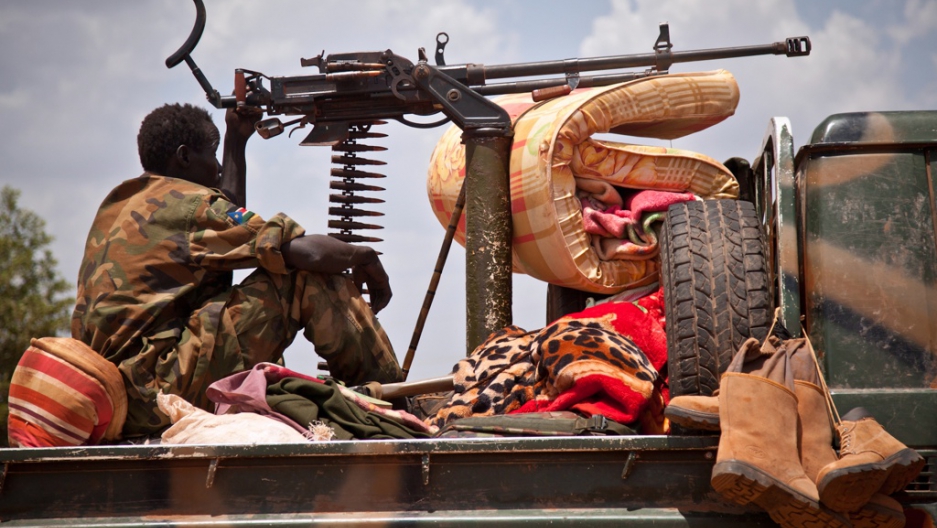 A South Sudan People's Liberation Army soldier in Heglig, on April 17, 2012. The South Sudan government eased tensions on Friday by beginning the withdrawal of all its troops from Heglig.
Credit: Adriane Ohanesian
Share

South Sudan has accused Sudan of launching fresh ground and air strikes inside its territory, days after the world’s newest nation announced it was withdrawing its troops from the disputed oil field of Heglig to avoid all-out conflict between the East African neighbors.

"Later on we had so many waves of attacks by SAF (Sudanese armed forces) deep inside South Sudan," Paul said, adding:

However, Sudanese army spokesman al-Sawarmi Khalid denied that any airstrikes had been launched on Sunday, insisting instead that the SAF had repulsed a “major” rebel attack on the strategic town of Talodi in the state of South Kordofan, on the northern side of the border.

Read more from GlobalPost on Sudan

Both sides’ accusations came a day after South Sudan accused Sudan of bombing its oil facilities, with a military official telling the BBC that the Unity oil field had been targeted. There are mounting concerns that all-out war between Sudan and South Sudan – which secured its independence from the north last July – is imminent.

On Friday South Sudan announced it was withdrawing its forces from the Heglig oil field, which it had occupied since April 9. Today the Satellite Sentinel Project released images of the disputed area, suggesting that key oil installations have been badly damaged during South Sudan’s ten-day occupation, according to the BBC.

On Saturday night a Muslim mob several hundred strong set fire to a Catholic church frequented by South Sudanese in the Al-Jiraif district of Sudan’s capital Khartoum, screaming insults at the mainly Christian and animist southerners as they did so.

In a statement released Sunday, the African Union called on both countries to end "senseless fighting."