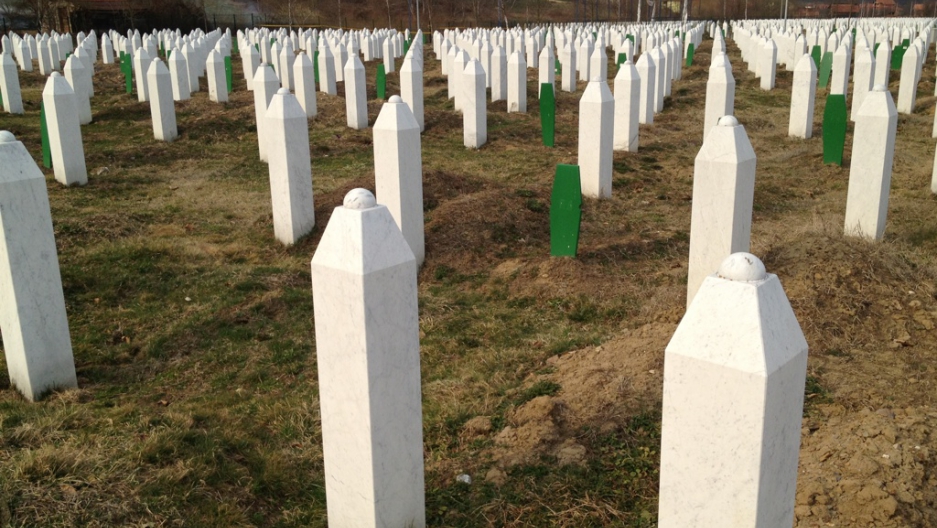 A cemetery, near Srebrenica, Bosnia, where 8,000 unarmed Muslim men and boys were massacred by Serb forces, one of a host of atrocities committed by Serbs during the 3-and-a-half-year Bosnian War.
Credit: Swanee Hunt
Share

Disclosure: Ambassador Hunt is one of a group of individuals who are investors in GlobalPost.

BELGRADE, Serbia — In April 2012, Serbia is living a paradox — beginning a new chapter before finishing the old.
With the recent resignation of President Boris Tadic, eyes are trained, at least for a moment, on that torn remnant of Yugoslavia. The country, in turn, is looking for ways to redefine itself through two complex processes: seeking European integration and improving relationships with its neighbors.

The bloody Serb incursion into Croatia and Bosnia happened while I served as U.S. Ambassador to Austria in the mid-1990s. In Vienna, I hosted symposia and negotiations to stop a war in which 90 percent of atrocities were committed by Serbs, although the percentage of indicted war criminals didn’t approach that balance. The Dayton Agreement ended the Bosnian war in 1995. Perhaps heartened by their reward of almost half the country (when they comprised one-third of the population), the Serbs enjoyed their role as the neighborhood bully until 1999, when NATO intervened with air strikes to protect the ethnic Albanians of Kosovo.

My iconoclastic husband, Charles Ansbacher, made the first American public appearance after the extremely unpopular bombing to stop the imminent genocide. As he prepared to lead the Serbian National Philharmonic in the Beethoven Ninth, I led a workshop with some 40 women from across the former Yugoslavia who had led democratic political campaigns. It was an important moment, even though the city seemed adrift in the wake of wars and sanctions. However they tried to recast history, under President Slobodan Milosevic nationalists had destroyed the Socialistic Federal Republic of Yugoslavia, leaving more than 100,000 dead, millions displaced, the infrastructure ruined, and fields planted with endless landmines.

Finally, in 2000, the student-led protest Otpor (“Resistance”) mobilized their country to end Milosevic’s two decades of rule. When six short months later he was taken to the International Criminal Tribunal for the Former Yugoslavia, many hoped for a transition to a democratic and peaceful Serbia.

A dozen years later, this coming May 6, a crucial election could produce significant change sparked by a new 30 percent quota for women’s representation in the parliament. Looking back, it’s interesting that the first multiparty elections in 1990 resulted in a Serbian National Assembly with 1.6 percent women, the lowest in Europe. The Inter-Parliamentary Union in Brussels notes that a higher proportion of women is correlated with more funding for health, education, and environment, and decreased funding for weapons. It’s just possible that Serbia in the early 1990s would have been less aggressive with a gender balanced Assembly.

Betting on that proposition is an unlikely duo within the current political coalition: Gordana Comic, the parliament’s deputy speaker and member of the Democratic Party, and Dijana Vukomanovic, vice president of (Milosevic’s) Socialist Party of Serbia. A decade ago, they might have been in a shouting match. (Gordana, a “street girl,” as she calls herself, started a group called “Women for Change,” leading demonstrations against the SPS.) Today their mutual respect is obvious: Deputy Speaker Comic is hopeful that Vukomanovic will join her on the Assembly benches next month. “The fact that we’re sitting at this parliament building working together in a joint government shows how much progress has been made,” she says. Comic envisions dialogue to bring their and other parties together and insists that women must create the space to let that happen. In turn Vukomanovic insists that her party must continue with post-Milosevic transformation, signaling a future for Serbia as part of Europe. She says she’s engaging the longer-serving deputy speaker for advice about how to make those changes.

Much less sanguine, women organizing protests at the grassroots say their own political resistance is unpopular and even dangerous. The crowd was sparse two weeks ago as Women in Black, committed to peace with justice, demonstrated against the installation of a monument honoring “defenders of the fatherland.” Zorica Trifunovic, co-founder, wonders, “The soldiers that fought in the ‘90s, included war criminals. How did they ‘defend Serbia’ by fighting the citizens of Bosnia, Croatia, or Kosovo?” Yes, there was death and destruction on all side of the conflict. But where is the memorial to those whom the “defenders” notoriously terrorized, raped, and executed?
Since 1991, Women in Black have stood in steady vigil in Belgrade’s Republic Square — sometimes hundreds carrying banners protesting the war and declaring “Not in our name.” With that long view, Trifunovic says, “I’m not sure there’s real progress here. The possibility of EU candidacy is driving change; otherwise we’re in danger of sinking into nothing again. We might lose this momentum, because the far-right parties are so strong and they’ve turned to Russia. No one is dealing with the past.”

That said, there are pockets calling for deep transformation. Active trailblazers who created The Center for Cultural Decontamination and Belgrade Anti-War Circle include four of the most prominent Serb intellectuals: renowned journalist Milos Vasic; Stasa Zajovic (co-founder of Women in Black); Borka Pavacevic, theater personality and CCD director; and historian Mariana Toma. At the height of Milosevic’s nationalist frenzy, which resulted in the massacre at Srebrenica, Bosnia, these voices pled for democratization and an end to war.

The 2012 elections may be a gateway for Serbia. Tadic will likely stand for office again on the same day as the parliamentary races, and he’s positioning himself as the best to lead his country toward the European Union. Although that process can take a decade, the country received full candidacy status in February, dependent on, inter alia, friendlier policies toward neighboring Bosnia and Kosovo.

But again the contradiction: Even as Tadic touts his positive relationship with the West to support his suitability for reelection, there are reports of two police in Kosovo’s capital being kidnapped by Serb forces. Instead of capturing Kosovars, Serbs might seize this moment to turn over a new leaf. So can we in the international community, by supporting more fully the moderate voices like Comic and Vukomanovic. Their job — and ours — is tough, often discouraging. Best to remember that transformation is inevitably uneven, fragile, gradual … and always incomplete.

Swanee Hunt, former U.S. Ambassador to Austria, is the author of "Worlds Apart: Bosnian Lessons for Global Security" as well as "This Was Not Our War: Bosnian Women Reclaiming the Peace." She is the Eleanor Roosevelt Lecturer in Public Policy at Harvard’s Kennedy School of Government.