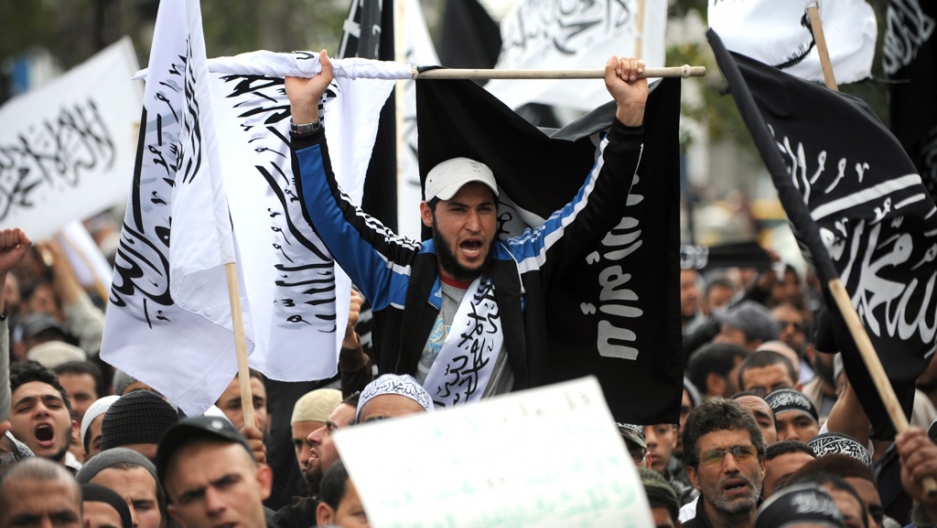 These conservatives, known as Salafists, had not openly participated in the uprising but were now trying to claim its mantle. As their rally ended on March 25, some Salafist extremists attacked actors in front of the national theater. The actors had been conducting a performance and were seen as secularists by the extremists.

The center-right Ennahda party, which now rules Tunisia as part of a coalition government, has come under increasing pressure from ultra-conservatives. Ennahda announced in March that it would not include Shariah law in the new constitution now being drafted. But the Salafists continue the battle to shift Tunisia society rightward.

For example, a Tunisian court recently handed down seven-year prison sentences against two men who had posted cartoons of the Prophet Muhammad on their Facebook pages. The satirical cartoons portrayed the prophet naked and were considered an insult to Islam. Leaders of Ennahda supported the sentence.

On April 19, hundreds of Salafists demonstrated in Tunis to demand conviction of a TV station owner who aired the film “Persepolis.” The award-winning animated film is critical of the Islamists who led the 1979 Iranian Revolution, and Salafists dislike its portrayal of Muhammad. The TV station owner faces criminal charges for violating Tunisia’s sacred values.

In December 2010, a street vendor named Mohamed Bouazizi immolated himself in the city of Sidi Bouzid. Police brutally repressed demonstrations in his support, leading to a countrywide uprising and the fall of dictator Zine El Abidine Ben Ali in January 2011. The Tunisian uprising sparked the Arab Spring throughout the Middle East.

In October last year Tunisians voted for Constituent Assembly delegates who would write a new constitution. They gave a plurality to Ennahda, a center-right Islamist party. A few months later, Ennahda formed a coalition government with two secular parties.

The Salafists do not represent a strong electoral trend but rather constitute a loose movement around Muslim identity issues. Despite their lack of a visible role in the 2011 uprising, they have rallied significant numbers of people in recent months. Critics say the Salafists engage in violent attacks on secularists. Supporters argue that they are simply using Tunisia’s democratic freedoms to express their views.

Ridha Belhadj is president of Hizb Ut-Tahrir, an ultra-conservative group that reflects many of the Salafist movement’s goals. He urges imposition of a strict interpretation of Shariah law, banning of alcohol and advocates establishment of a Khalifa, or Caliph, a Muslim ruler to govern Tunisia. Women can lead more virtuous lives by staying at home to raise children, he claims.

In a GlobalPost interview, Belhadj said Ennahda leaders “think Islam is a personal matter, but Islam is a great resource to rule people.”

Ennahda rejects the Salafist political ideology but is susceptible to its pressure, much as ultra-conservative Christian groups in the United States exercise influence on the Republican Party.

Said Ferjani, a member of Ennahda’s Political Bureau, said in a GlobalPost interview, “Religiosity has been suppressed for 50 years. People are scared. We understand it.”

But secular activists who helped lead the uprising worry that ultra-conservatives are hijacking the revolution. Lina Ben Mhenni, a prominent blogger and university lecturer, said both Ennahda and the Salafists want to shift the debate away from Tunisia’s 19 percent inflation rate.

“They emphasize fake debates about identity,” she said.

She cites women’s rights as an example. In the 1957 Personal Status Code, Tunisia’s secular, anti-colonial government outlawed polygamy, gave women equal rights and even provided the right to abortion.

Salafists are trying to roll back those rights, according to critics. Belhadj argues that while women are free to work, they can best live pious lives by staying home to take care of children.

“Under this Islamic way of life, her honor would be protected,” he said.

Ennahda leaders have also made a series of controversial statements about women’s rights.

Souad Abderrahim, an Ennahda delegate to the Constituent Assembly, said in a radio interview that single mothers are disgraceful and “do not have the right to exist.”

“I am ashamed of Arab and Muslim countries that try to make excuses for people who have sinned,” she said.

Another Ennahda leader later repudiated the comments. Such disagreements reflect an ideological battle within Ennahda, according to Ahmed Ounaies, Tunisia’s foreign minister for several months in 2011.

“Some of the Ennahda leaders have a Salafist past,” he said. “Others are more moderate. All of them are conservatives.”

Regardless of the ideological leanings of Ennahda leaders, secular activists say they will keep up the pressure to counter the ultra-right at the polls and in the streets. The government has scheduled presidential and parliamentary elections for next spring.

Blogger Ben Mhenni said she doesn’t think ultra-conservatives will prevail in imposing their version of Islam on Tunisia.

“Tunisian civil society will be here to exert pressure. I don’t think they will succeed,” she said.