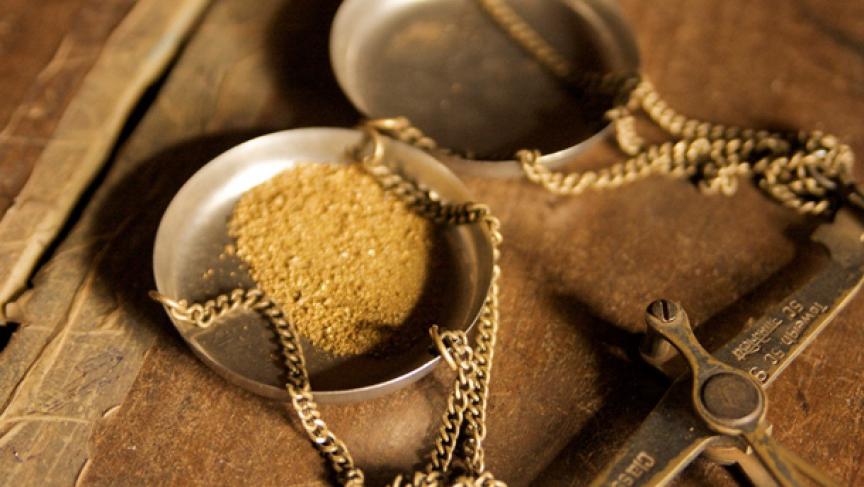 South Africa has produced 40 percent of all the gold ever mined. Now, thousands of miners are suing South African mining companies for poor working conditions(Photo by Grassroots Group via Flickr.)

Over the past century 40 percent of all gold mined has come from South Africa.

But all that glitters is definitely not gold. The rock that bears gold also contains silica, which causes a disease called silicosis, when silica lodges in the lungs. It is estimated that half of South Africa's gold miners suffer from the life-threatening disease.

Michael Cohen, a reporter covering the story for Bloomberg News in Capetown, South Africa, said though thousands of miners have been affected, the full scale of the issue is unknown.

“The estimates range as high as almost 300,000 people who might have contracted the disease. The mining companies clearly have a big problem on their hands,” Cohen said.

Now there is a class action lawsuit, the largest in Africa’s history.

Though people have mined gold in South Africa for decades, in the past, mining companies have claimed they comply with safety laws. Now, a couple of lawyers have come forward, claiming they have not.

“The whole thing came to a head last year when South Africa's highest court ruled that miners had the right to sue their mining companies for compensation in addition to that covered by the state compensation fund,” Cohen explained.

Before that ruling, Cohen said, mining companies had always argued that under South African law, miners were limited.

Ironically, more than 100 years ago, South Africa became the first country in the world to pass a law that recognized the need to compensate miners for silicosis.

According to Cohen, back then, the laws were structured against the miners themselves.

“The amount of compensation that was paid out was pretty small amounts. For instance, the miner who won this compensation case in South Africa's highest court last year, a guy by the name of Thembekile Mankayi, who died, actually, just before the ruling, won a settlement. And that court case has now opened the way for substantially bigger settlements,” Cohen said.

Though Cohen said Manyaki wanted to sue the mining company for a substantial amount of money, Cohen said he was paid only slightly more than two thousand dollars.

He admitted, though, that despite the problems with silicosis, the overall safety procedures in South African mines have improved. In the past, instead of using masks or respirators, the miners used wet bandanas and t-shirts.

“Certainly some of the miners that I've spoken to who've worked in the mines a long time ago said the safety procedures that were utilized were substandard,” Cohen said. “I think things have substantially improved over the past couple of years. They pump a lot more compressed air into the mines and settle the dust much more effectively and I think we've seen over the last little while the number of new cases has decreased substantially.”

Hundreds of thousands of miners may have contracted silicosis in these mines, but according to Cohen, only about 7,000 have signed onto the class action lawsuit. Cohen said that because class action lawsuits are not common in South Africa, this lawsuit will likely set new legal precedents for the country. But it is also incredibly difficult to estimate the number of miners who have silicosis.

“The last comprehensive study I looked at was from 1998, and then they estimated that there were 196,000 miners from South Africa and just over 84,000 from neighboring countries who were potentially claimants. A lot of these people are no longer working, they're situated in rural areas, they might not know about the lawsuit, they might not have the information, may be even too sick to participate. And some of them have, of course, died,” Cohen said.

Cohen believes apartheid has played a large role in the gold mining controversy. He said apartheid laws were structured in a way to ensure the mines could be supplied with cheap labor. Laws were formulated to protect the mining companies.

“The miners, largely, were black, had very few rights and very little scope to contest this. A lot of these cases date back to pre-apartheid, people working underground who were doing so pre-1994 and are still living with the disease today. Certainly apartheid created the conditions for substandard working conditions,” Cohen said.

The mining companies have responded to the lawsuit defensively, saying they have complied with the law, are not liable and will fight the lawsuit it in court.

This lawsuit will have large implications for the gold mining industry in South Africa, as gold is still one of the major sources of export revenue.

“It's a very mature industry ... production has been falling for a number of years. It presents the government with somewhat of a problem, because you've got this industry which is in decline,” Cohen said. “They understand the miners' complaints and they are concerned about inadequate compensation and at the same time you've got an industry which still employs a lot of people and you could potentially destroy it if the claims are too big.”