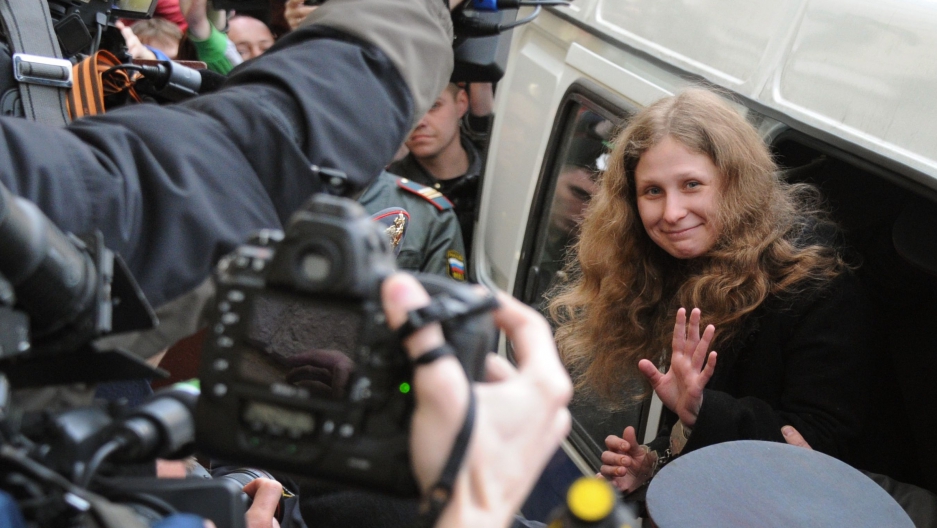 Yekaterina Samutsevich waves as she arrives for the court hearing in Moscow.
Credit: ALEXANDER NEMENOV
Share

Three female members of the Russian feminist punk band Pussy Riot who mocked President Vladimir Putin in a flash protest inside Russia’s main Orthodox church are to remain behind bars until June, following a decision by a Moscow court to extend their pretrial detention.

Nadezhda Tolokonnikova, Maria Alekhina and Yekaterina Samutsevich are to remain in detention until June 24, a district court judge ruled Thursday, after police petitioned to keep the women in prison while an investigation continues, the Associated Press reports.

Investigator Artyom Ranchenkov said in televised remarks that Pussy Riot’s stunt “in a holy place was illegal and utterly cynical.”

Around 100 people, both supporters and Russian Orthodox supporters of the women, gathered outside the court during the custody hearing on Thursday, and at least 20 protesters were detained, according to the BBC.

They later released a video of the stunt, which was executed just two weeks before Putin defied a wave of massive anti-regime protests to win a third presidential term.

Three band members were taken into custody in March, and each face seven years in prison if convicted on charges of hooliganism. According to the Guardian, Pussy Riot is comprised of 10 full-time members who organize guerrilla shows in Moscow. At least two of the three women detained deny being in the group or being involved in the protest.

Western human rights groups have criticized the Russian authorities’ handling of the affair, which has renewed concerns over the close relationship between the Russian Orthodox Church and the state.

In a statement on its website, Amnesty International said: "Even if the three arrested women did take part in the protest, the severity of Russian authorities’ response - detention on the serious criminal charge of hooliganism - would not be a justifiable response to the peaceful (if, to many, offensive) expression of their political beliefs, and they would therefore be prisoners of conscience."

Tolokonnikova, speaking from inside a metal cage before the court extended her detention, said the stunt “was a performance directed against a merge of state and church,” while Alyokhina said before that “behind bars, I feel more free than those who put me there,” the Agence France Presse reports.