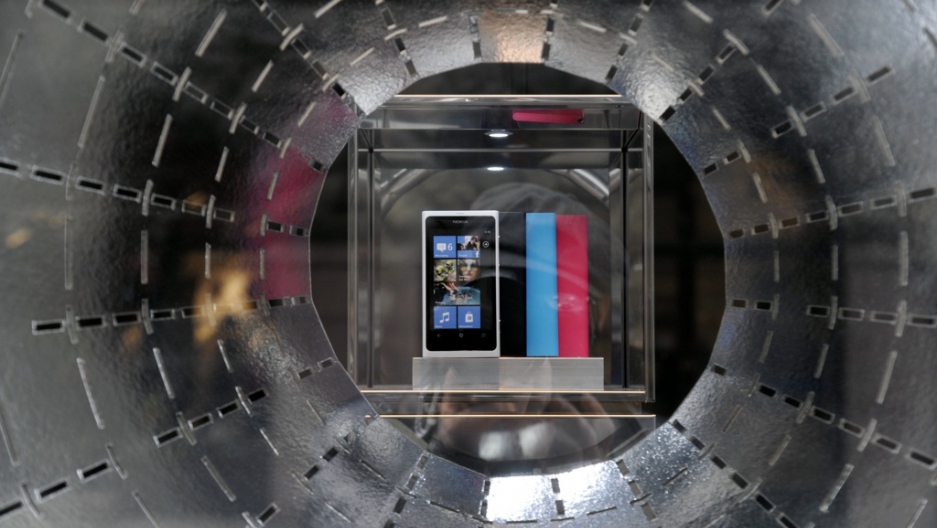 An advertisement for the new Nokia Lumia mobile phone is displayed at a Nokia flagship store in Helsinki on April 19, 2012. Finnish mobile telephone maker Nokia said on April 19 that it suffered a net loss of 929 million euros ($1.2 billion) in the first three months of the year, partially due to mixed reviews of the Lumia.
Credit: Markku Ulander
Share

Nokia just blew its first quarter earnings, in part because sales of its new iPhone-killer, the Lumia, have been "mixed." (Read our Lumia review here.)

The company is burning cash at a mind-boggling rate, and it's about to run into a cash crunch.

Nokia still has €4.9 billion of "net cash" on its balance sheet (cash less debt) and €9.8 billion of total cash. That's a lot. But in the past year, Nokia has gone from comfortably making money to losing a lot of it.

In the past year, Nokia has burned €1.5 billion. In the past quarter, it burned a staggering €700 million. At the first quarter's burn rate, Nokia would blow through its net cash in 7 quarters (less than two years) and its total cash in four years.

A couple of years ago, when Elop took over the cratering company, he wrote a famous, ballsy memo likening Nokia's situation to being on a "burning oil platform" in the middle of the ocean. Doing nothing, Elop said, meant certain death. Jumping off the platform into the swirling ocean, meanwhile, meant a shot at life. And so Elop jumped off the platform and bet the company on Microsoft's Hail Mary attempt to catch up in the mobile market--Windows Mobile.

This was a ballsy and necessary move by Elop and Nokia.

Alas, the reason jumping off a burning oil platform in the middle of the ocean seems crazy is that the chance of surviving is very low.

And Nokia may well drown.

Here's a summary of Nokia's first quarter. Check out those horrifying year-over-year comparisons, as well as the operating cash loss. The total cash burn is even higher, because of capital expenditures.

And here's a summary of the cash position (total Q1 cash burn was €700 million):

Here's a snapshot of the overall revenue and device-sales collapse:

And then there's the final problem: Sales of smartphones have completely collapsed:

SEE ALSO: NOKIA: We're So Screwed That We Need To Jump Off The Burning Platform

Swiss Model Xenia Tchoumitcheva Tells Us About Interning At JPMorgan, And What She's Doing Now

Suddenly Markets Around The World Are Deflating