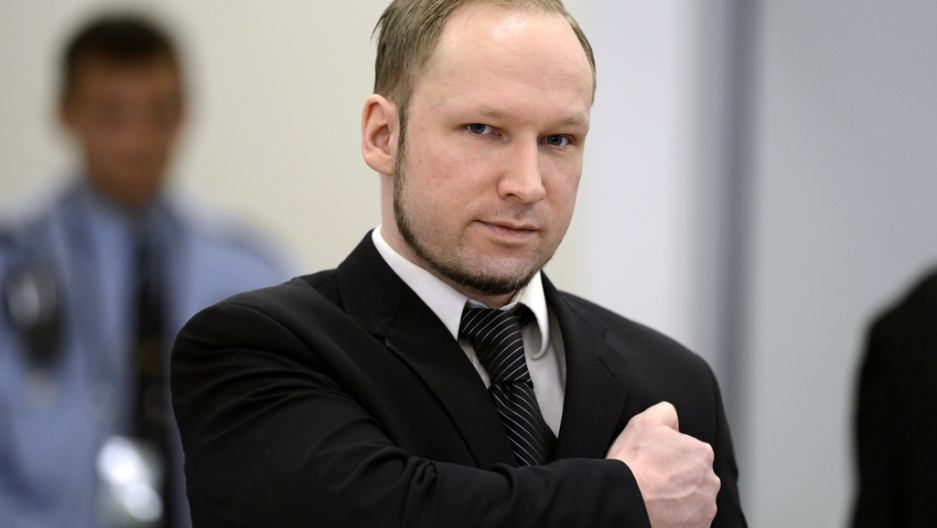 Self confessed mass murderer and right-wing extremist Anders Behring Breivik places a clenched fist on his heart in a salute as he arrive on day three in room 250 at the central court in Oslo on April 18, 2012. Anders Behring Breivik, who killed 77 people in Norway last July, took the stand again on April 19, 2012, stating that he originally planned to detonate three bombs.
Credit: ODD ANDERSEN
Share

On the fourth day of his trial, Norwegian shooter Anders Behring Breivik said he prepared himself for the attacks by playing World of Warcraft and Call of Duty: Modern Warfare for hours on end, for a whole year, according to The New York Times.

Breivik, who is on trial for killing 77 people last July in Norway's worst massacre, said, "I don't really like those games but it is good if you want to simulate for training purposes" and smiled while talking about the aiming system, according to Reuters.

Beginning in December 2006, Breivik spent a year playing World of Warcraft for nearly 16 hours a day in isolation from society. He said, however, that this game had nothing to do with the massacre and was simply a hobby. "I had been dreaming about it all my life, to take a sabbatical to do what I always dreamed about," said Breivik, according to The Times.

Breivik claimed that Modern Warfare helped him practice his shooting skills because of its holographic sight. Speaking of the game, he said, "It consists of many hundreds of different tasks and some of these tasks can be compared with an attack, for real. That's why it's used by many armies throughout the world. It's very good for acquiring experience related to sights systems," according to the Guardian.

Breivik also testified that he had originally planned to capture and decapitate Norway's former Prime Minister Gro Harlem Brundtland who was on the island Utoya before Breivik arrived. Breivik said he would have filmed the beheading and posted it on the internet, stating, "It was meant to be used as a very powerful psychological weapon," according to the Associated Press.

Showing no remorse, Breivik also said, "The goal was not to kill 69 people on Utoya. The goal was to kill them all."

Bloomberg noted that Breivik originally planned to detonate three bombs before going on a shooting rampage. He had considered targets such as Aftenposten newspaper, City Hall and the Royal Castle, but the plan failed because it was "more difficult than I thought to build a bomb."

Breivik has been indicted on two terrorism charges as well as murder and may face a sentence of 21 years in prison with five-year extensions if he is deemed sane, said Bloomberg.

More on GlobalPost: Should the EU give up on green energy?