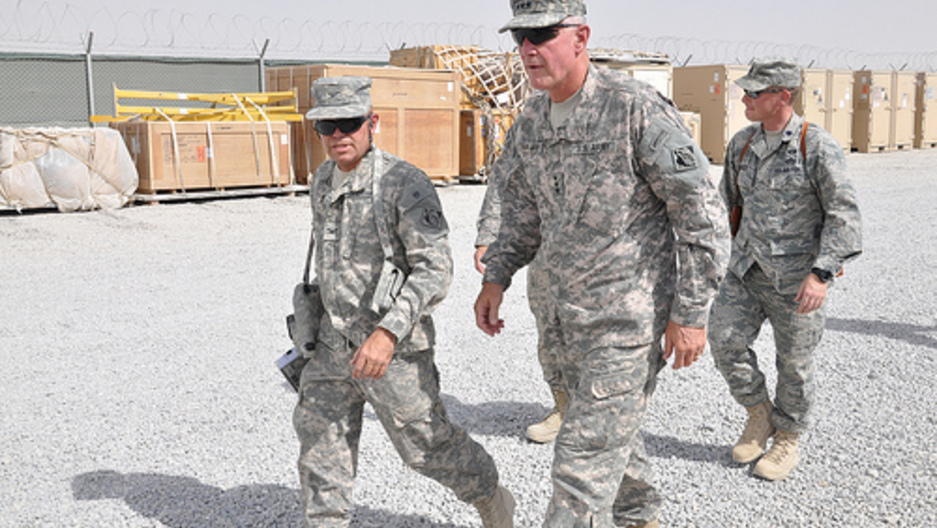 The war in Afghanistan has become increasingly unpopular, according to recent polls, and the emergence of recent photos follows a string of recent controversy. (Photo from Flick user US Army Corps of Engineers.)

The Los Angeles Times published photographs of United States military personnel posing with Afghan corpses. Included is a photo of soldiers posing with the "mangled corpse of a suicide bomber."

The Pentagon has launched a criminal investigation into what it believes is a violation of Army standards. Army spokesperson George Wright condemned the actions of those responsible for the photographs.

"Such actions fall short of what we expect of our uniformed service members in deployed areas," Wright said.

But Peter Galbraith, former United Nations Deputy Special Representative for Afghanistan, said while the pictures are certainly inappropriate, it's important to put this latest scandal in perspective.

"This is far from the most serious issue or element of misconduct that there has been," he said. "It doesn't really compare for Afghan sensibilities to the burnings of the Koran, although that was accidental. It's certainly nothing like the sergeant going out and killing 17 people or even an earlier photo of soldiers urinating on the corpses of dead insurgents."

Galbraith pointed out many of the decased Afghans were suicide bombers and many civilian Afghans have contempt for suicide bombers. However, that doesn't excuse the photographs.

"I think it's correct that there should be an investigation. There should be some kind of punishment for those who were responsible, but in the scheme of things, this is not the most serious thing we have faced," Galbraith said.

Select photos were published after an anonymous soldier provided 18 images to the L.A. Times. Readers have reacted strongly and some have questioned the newspaper's ethics in choosing to publish them.

"Because of your supposed 'obligation' to the people who buy your newspaper, my husband and his colleagues will be in even more danger in Afghanistan. Did that cross your mind?” Anne Hoffler, a reader in Richmond, Va., asked.

Galbraith suggested photos like these would reach a wide audience regardless of whether the L.A. Times published them.

"We're fighting a war in the 21st century, and there have been horrors in every war in human history," Galbraith said. "But now we have this near-instantaneous form of communication. In the old days, if you took photographs, they were on film. They were hard to distribute. Now you can just put them online, and as a result both we, the Taliban and Afghans just see more of it, and so the impact is so much greater, even if the troops are more disciplined than they have ever been."

Galbraith said while the images may show the graphic realities of war, he believes there are "good command reasons" to prohibit taking and distributing pictures like the ones sent to the newspaper.

"There are political consequences that hurt the mission, and so I think the Army is right to have the policy, the prohibition on these kinds of picture," Galbraith said.

No matter the impact the photographs may have on the troops or their mission, publishing the images will likely deal a blow to the already diminishing support in the United States for the war in Afghanistan.