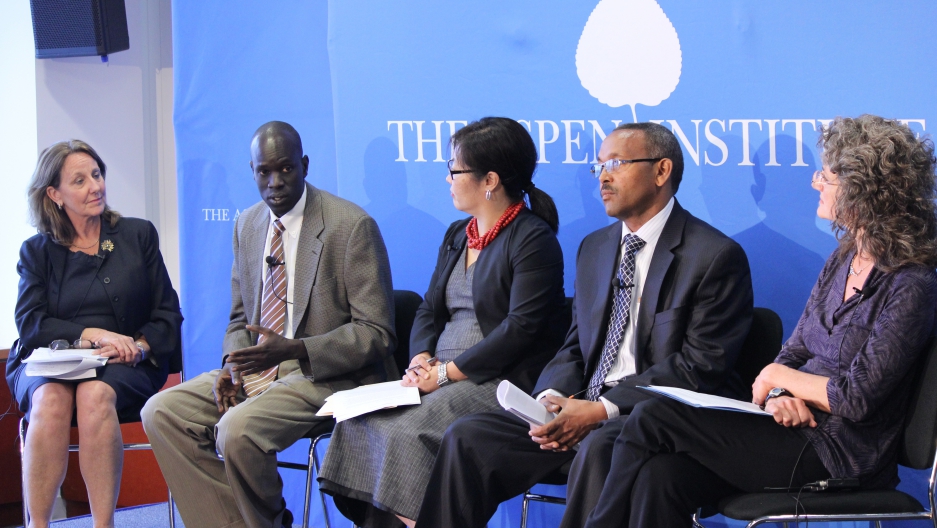 Salva Dut, founder and president of Water for South Sudan, speaks to the audience at a discussion called “7 Billion: Conversations That Matter” hosted by the Aspen Institute’s Global Health and Development in Washington, DC on April 18, 2012.
Credit: John Donnelly
Share

WASHINGTON — The US Census Bureau’s World Clock says that the population of the world today is estimated at 7.008 billion people, while projections show that the world could reach the 9 billion marker by 2050.

In the last of its series called “7 Billion: Conversations That Matter,” Aspen Institute’s Global Health and Development today hosted a panel of experts based in Africa and the United States on the interconnectedness of gender issues, family planning, population and access to safe water.

The point of the series was to ask questions about why it mattered that the world was passing the 7 billion mark, and the questions today in Washington were appropriately big: Will water wars replace oil wars? What are the solutions to expand water and sanitation to the 2.5 billion people who don’t have it? And just how many people can the world support in an equitable fashion?

An answer to the last question: You need a bigger pie, better manners, and fewer forks.

Borrowing from a book by Joel Cohen called “How Many People can the Earth Support?” (written in 1996 when the world supported a 5.7 billion population), Laurie Mazur, director of the Population Justice Project, said that the answer was “it depends on how we use resources.”

“That involves things like drilling more (water) wells, and having less waste,” she said. “It also involves better manners, addressing equity issues and making sure everyone has enough. And it involves fewer forks, and that’s about slowing the human growth path.”

The panelists kept coming back to the connections among access to water, family planning, and finding ways to use resources more efficiently.

Jaehyang So, manager of the Water and Sanitation Program, a multi-donor partnership administered by the World Bank, said that she sees a great need for better tools to provide clean water and sanitation to those without them.

But she said in order to reach the 2.5 billion people without access to clean water, “you have got to go to scale.” She said the World Bank lends $7.3 billion to provide access to water and sanitation “but we need hundreds of billions of dollars to reach these people.”

Salva Dut, founder and president of Water for South Sudan and one the “Lost Boys” of Sudan who ﬂed the war-torn southern regions of Sudan in the mid-1980s, said that much depended on providing more education to girls and more family planning services to women in the developing world.

Looking out at an audience of predominately women, he said, “You American women should say thanks you were born in America. Here in America, if a man says. ‘I want to many five or 10 wives,’ you would say, No, no, no.’ Correct?”

Women laughed. “Why are you saying no? Because you are educated. But if you are illiterate, you will not say no. You will say yes. You need that man. These poor women-girls have no clue. This world is about producing babies as much as you can, that’s what they understand. For us not to educate these younger girls, the population in the world will continue.”

And in a subject that has been debated for decades, what about the possibility of water wars ahead?

Dut said they are already happening. He pointed to his newly independent country of South Sudan and its northern neighbor Sudan, where fighting has already started. While many analysts attribute the fighting to oil, he said the fighting also is linked to water rights.

“You see the tribal fighting today,” he said. “‘They are killing each other, and people think here this is crazy tribal …. But in one instance, three tribes there who are pastoral tribes, what they do in dry season? They move cattle to where the water and grass is. What happens? People steal cows of others. War breaks out.”

He worries about the future impact of global warming, which could lead to future shortages of water. “Soon we’ll have global warming come in, then there will be no water. When there is no rain what will happen?”

Mazur said that one way to lessen the strain on water is to expand family planning.

“If there is any resource that does represent a true limit to the growth of the human enterprise, it would have to be water,” she said. “Water is an essential resource. There is no substitute for water. It is essential to life, health. It is finite. There is the same amount on the earth today as there was during the time of the dinosaurs.”

In the near term, she predicted, the problem in the combustible mix of water access and population pressures is likely to get much worse.

Why? In the countries without great water scarcity, the fertility rate per woman is about three children. But for places in the world with the greatest water problems? The fertility rate, she said, was nearly five children per woman.