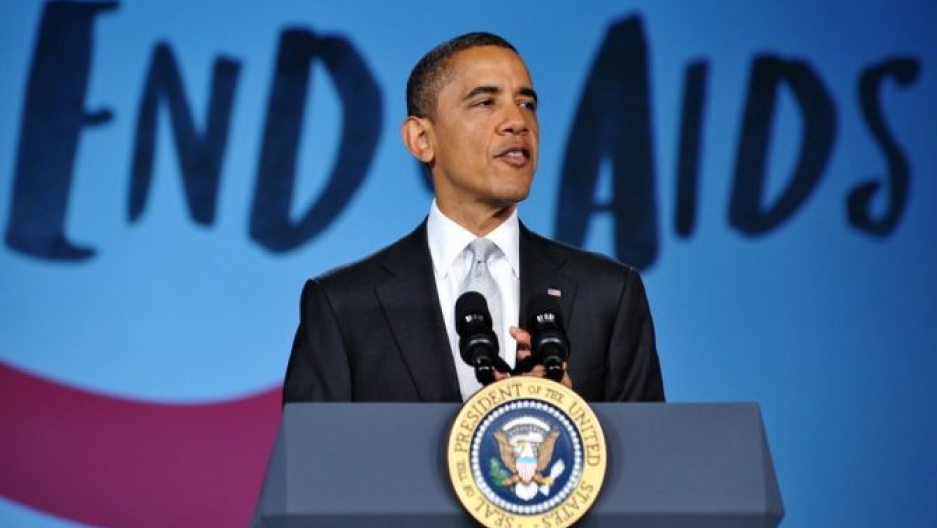 WASHINGTON – The Obama administration has set extraordinarily high goals in its fight against AIDS around the world. Secretary of State Hillary Rodham Clinton said late last year that an “AIDS-free generation” is possible. And President Obama promised last December that the number of US-supported AIDS patients on treatment would rise to 6 million by the end of next year, up from the current 4 million.

So why did the administration submit a fiscal year 2013 budget that called for a $550 million reduction — an 11 percent cut — in its global AIDS program?

GlobalPost put that question to the Obama administration several weeks ago and US officials responded, saying that the government didn’t need more money because there has been nearly $1.5 billion stuck in the pipeline for 18 months or more.

In an interview with GlobalPost, Ambassador Eric Goosby, global AIDS coordinator, explained that $1.46 billion designated to fight AIDS hasn’t been used because of inefficient bureaucracies; major reductions in the cost of AIDS treatment; delays due to long negotiations on realigning programs with recipient country priorities; and a slowdown in a few countries because the AIDS problem was much smaller than originally estimated.

“What we’re doing is defining what money is available, and what’s left are our resources that we will put back into AIDS-free generation type activities — things that will not require continued year funding, could be a one-time funding effort,” Goosby said.

More from GlobalPost: In AIDS fight, a question of funding, not science

Prompted by the GlobalPost inquiry, Goosby’s office said this week it will immediately start a consultation period with Congress, its partners across the US government and AIDS advocates to address a key question: What should they do with $1.46 billion?

While this could create an unexpected windfall for some programs, it also means that several countries that have not spent the funds will lose tens or hundreds of millions of dollars. The key loser appears to be Kenya, which has had a half-billion dollars — roughly one-third the total amount in the pipeline — that has been accumulating in the US Treasury unspent for more than 18 months after Congress appropriated the money.

In the eight years of US funding of AIDS globally, Congress has appropriated $37.9 billion, amounting to the largest government program ever to fight a single disease, an initiative started by President George W. Bush known as the President’s Emergency Plan for AIDS Relief, or PEPFAR. It has won wide bipartisan support from the start because of its success in saving millions of lives of Africans with AIDS and helped shore up dysfunctional health systems in some of the poorest parts of the world.

More from GlobalPost: A Q&A with US global AIDS coordinator Eric Goosby

But from the start it has been a challenge to spend the money in many countries because many places could not absorb it quickly enough.

Of the $37.9 billion authorized to fight AIDS, $28.9 billion was spent by March 2012, leaving $9 billion in the pipeline, according to figures provided by the US Office of the Global AIDS Coordinator. And of that $9 billion, roughly $7.6 billion is earmarked for programs or is within the acceptable range of 12 to 18 months worth of money in reserve for overseas development programs, State Department officials said.

But the $1.46 billion has been sitting too long — US officials called it a “bad pipeline” — and the officials said in several interviews over the past few weeks that they now will start a process of removing the unspent funds from country ledgers. Senior officials said this week that they have drawn up internal broad guidelines on how they would spend the money and now will move toward identifying specific programs to fund.

To put this in perspective, $1.46 billion is roughly three times the annual amount the US government spent on AIDS globally a decade ago.

More from GlobalPost: Making sure the national HIV/AIDS strategy works

Goosby said his office has been aware of a growing pipeline of unspent money for the last two years, and he ordered investigations into why the money was building up in certain countries, notably Kenya, Ethiopia, Mozambique and Tanzania. His office has not spoken publicly about the backlog until now in part because of internal concerns that Congress could cut future budgets because such a large amount was being delayed in the pipeline.

State Department officials told GlobalPost, though, that many foreign assistance programs build up a pipeline of 12 to 18 months of funding. The difference with the PEPFAR backlog is its sheer size; then again, PEPFAR accounts for roughly 20 percent of the US foreign assistance budget.

Kenya has had trouble spending the money because of inefficiencies in its two ministries of health, which were set up as part of a negotiated settlement following post-election violence in 2008, according to several US officials in Washington and Nairobi. Ethiopia’s AIDS prevalence rate, which was estimated at 7.3 percent in 2001, before PEPFAR, was at 1.5 percent in 2011, because of highly inaccurate statistical modeling that inflated the figure for years.

More from GlobalPost: Female condoms: Pricey but cheaper than the alternative

Goosby acknowledged the large amount of unspent money was the major reason why the administration asked for a reduction in funds for the next fiscal year. He said his office asked for what it would need to meet goals under US-supported programs, and because of the cut it also saw an opportunity to seek a 57 percent increase for the Global Fund to Fight AIDS, Tuberculosis and Malaria, to $1.65 billion next year.

Some activists said at the time of the budget announcement in February that the administration “raided” its own AIDS program to put money in the Global Fund. But Goosby said that was an inaccurate analysis.

Several AIDS activists interviewed said they were surprised to hear about the pipeline. Stephen Lewis, a former United Nations special envoy for HIV/AIDS in Africa and now co-founder and co-director of AIDS-Free World, an international advocacy organization, said he was disappointed that the US administration hadn’t been more forthright about the unspent money a long time ago.

“I don’t understand how $1.5 billion accumulates, and suddenly you are in a panic to disburse it,” he said. “I’m glad there is money available for critical purposes, but I would have thought this could be planned for in an orderly way.”

US officials counter that they will spend the money only after consultations and that it is better to put the money where it can be used now rather than letting it sit.

“We see a large need out there, and we have very ambitious goals,” said Tom Walsh, a PEPFAR spokesman. “We will make sure that we are spending the money we have effectively.”

GlobalPost's reporting on global heath is made possible in part through a partnership with the Henry J. Kaiser Family Foundation as part of its U.S. Global Health Policy program.