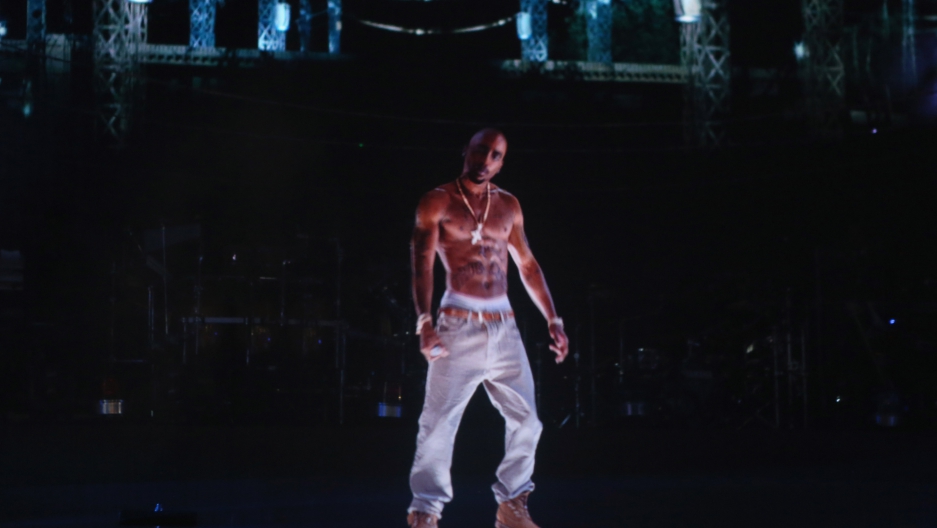 Tupac Shakur made a miraculous appearance at the Coachella music festival over the weekend with a little help from science.

The late rap super star took to the stage one last time with his good friends, Snoop Dogg and Dr. Dre.

How did he bust out  "2 of Amerikaz Most Wanted" nearly 16 years after his death? With a little smoke and mirrors.

According to Gizmodo, the image projected on stage was not a hologram of a past performance, but rather some very expensive CGI work by Hollywood-based special effects studio, Digital Domain. The effects studio previously worked on projects like, "The Curious Case of Benjamin Button", "TRON: Legacy" and "X-Men: First Class".

The technique they used to bring Tupac back to life is called Peppers Ghost.  With Peppers Ghost, technicians used the reflective properties of glass and just the right lighting angles to create a 2-D image of the rapper that looked, and sounded, like the real-deal.

Nick Smith, president of AV Concepts, the San Diego company that projected and staged the hologram told MTV News, "We worked with Dr. Dre on this and it was Dre's vision to bring this back to life. It was his idea from the very beginning and we worked with him and his camp to utilize the technology to make it come to life."

The reported price tag of the one-time special post-mortem performance is said to be somewhere between $100,000 to $400,000.

AV Concepts described the process of projecting their version of Tupac at Coachella on their website saying, "Utilizing the Musion Eyeliner system, the 302 x 132 screen was customized by AV Concepts to descend onto the stage in mere seconds between sets of the performance to bring the infamous, deceased singer back to life. The most critical technical element was AV Concepts' proprietary Liquid Scenic server that delivered uncompressed media for 3 stacked 1920 x 1080 images, delivering 54,000 lumens of incredibly clear projected imagery."

Some are speculating if the vocals were actually that of the late rapper, as Rolling Stone pointed out Tupac yelled, "What's up Coachella" in the beginning of his set. The music festival started three years after his death in 1996.

However, the lyrical controversy didn't seem to phase the one fan that matters most, Tupac's mother, Afeni Shakur. Afeni told TMZ.com she was positively thrilled with the performance.

More from GlobalPost: Whitney Houston's funeral will be filled with music (PHOTOS)

[View the story "Tupac, Dead or Alive? " on Storify]