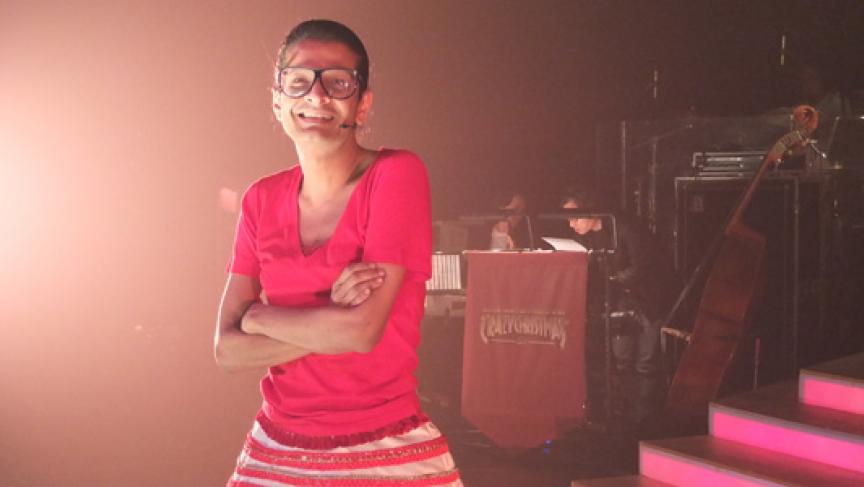 The government in Singapore runs a pretty tight ship.

The tiny city-state in southeast Asia is known as a neat, orderly and predictable place to do business. One thing Singapore isn’t known for is its sense of humor. This, after all, is a country where chewing gum is prohibited. And where freedom of speech only goes as far as the authorities deem appropriate.

Still, a handful of Singaporean comedians are becoming increasingly vocal. And in doing so, they might be helping the government meet an important goal.

That alliterative subject line comes from a classified U.S. diplomatic cable released last year by Wikileaks. The cable notes that the famously strict Singaporean government is trying to encourage Singaporean citizens to loosen up and be more creative.

Thart brings us to the country’s best-known comedian: a cross-dresser named Kumar.

"Kumar" means “young man,” though when this Kumar takes the stage, he’s all woman.

“I’m the only woman in this whole bloody ballroom!” declares the gravely voiced comedian to uproarious laughter. “I’m more than a woman and more than a man can be!”

Under four decades of the People’s Action Party, Singapore has gained a global reputation for being clean, rich, hyper-functional, and highly restrictive.

Yet as noted in the Wikileaks-released cable, Kumar’s popularity signals that Singapore is giving its citizens more free reign, at least in the social sphere.

“A lot of people know that Singapore is very uptight,” said Kumar in between back-to-back, sold out performances at Singapore’s Esplanade Theatres on the Bay. “We are uptight and yet we are not. We are trying to loosen up because the authorities understand that we need to loosen up. We look like the first world, but inside, we are still third world.”

After gaining independence from Malaysia in 1965, Singapore had an uncertain economy.

Today, Singapore is one of the world’s wealthiest countries. Case in point: it’s home to the world’s highest percentage of millionaire households.

But with growing competition from China and India, Singaporean officials want to transition from a nation of exports and services to a more entrepreneurial, knowledge-based economy.

That means encouraging risk-taking and independent thinking in a society where risk aversion and cautious thinking run deep.

And that’s good news for Kumar and for his comedic colleagues.

Type the name “Mr. Brown” into Google. The first result will take you to the site of Kin Mun Lee, a Singaporean blogger and comedian better known as Mr. Brown. From 2003 to 2006, Lee wrote a weekly humor column for a print publication called “Today.” When the government criticized Lee’s work, the paper suspended the column. Lee turned to the Internet, where he discovered more freedom to document and dissect what he refers to as “the dysfunctional side of Singapore life.”

“Some people accuse me of being anti-government,” said Lee from his studio in Singapore’s vibrant Arab Street neighborhood. “And I’m like, ‘Dude, I’m not. I’m just pro-comedy. Everybody is fair game.’”

“Welcome to today’s edition of The Mainstream Media Trying To Be Hip News Podcast,” said Lee over a kazoo version of the Star Wars theme. “Today, we bring you the dialogue between Jedi younglings and their elders, recorded live last week, then edited and made suitable for prime-time viewing.”

“I’m 41,” Lee said, “and I’ve seen Singapore turn from pretty much a very restrictive place where things were run very tightly to right now, where the government can’t shut us up because we have Facebook and Twitter now.”

That is, until recently.

After a drubbing in the 2011 general elections, the government is striking back. In contrast to it’s initial “light touch” approach with the Internet, the Singaporean government recently demanded a handful of prominent dissenting blogs remove what they regarded as rumors and defamatory content.

Professor Cherian George, a Singapore-based media scholar, is a member of a group called Bloggers 13, which advocates for Internet freedom in Singapore.

“As a nation, we take an extremely cautious and conservative view towards any harm that can come from communication," George said. But, "I think most Singaporeans would want to tell their politicians, ‘Well, just get over it, this is what politics is like, and there really is no need to use the law the moment you feel upset or offended by citizens who criticize or insult you.’”

There’s little doubt that comedians like Kumar and Kin Mun Lee, a.k.a. “Mr. Brown” will continue to push that envelope. Within days of the government reprimand of dissenting blogs, Lee’s podcast featured a mock advertisement for a fake law firm aimed at helping Singapore’s privileged elite take legal action against online insults, real or perceived.

Perhaps if the Singapore government can lighten up enough to enjoy comedians like Kumar and Kin Mun Lee, the creativity and risk taking that officials are hoping for will materialize.