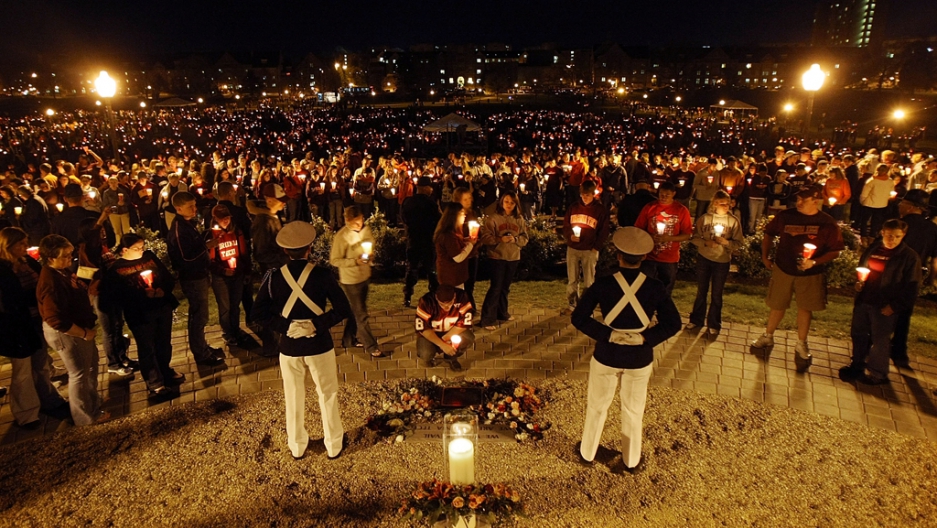 Corps of Cadets guards keep watch next to a ceremonial candle during a candlelight vigil on Virginia Tech's Day of Remembrance honoring the 32 people killed by Cho Seung-Hui on April 16, 2008 in Blacksburg, Virginia. Today is the five-year anniversary of the worst school shooting in US history, and will also be commemorated with a candle-lit vigil.
Credit: Mario Tama
Share

Virginia Tech is commemorating the 5th anniversary of the 2007 shooting on Monday with a candlelight vigil and memorial service for the 32 victims of shooter Seung Hui Cho, USA Today reported. It was the deadliest mass shooting in modern US history.

Students will also return to classes for the first time; for the past four years, the college had suspended classes to mark the April 16 anniversary, the Washington Post reported.

"[The victims'] passion for education, their desire to do good in the world, their commitment to their disciplines come through so strongly that we felt being in classes was one special way of remembering them onward," Provost Mark McNamee, who chaired a committee that planned memorial events in the years after the shooting, told the Huffington Post. "This is what they did, this is what we do, and it's important to us. My sense is that our students and our faculty are ready for it."

The university will hold a picnic for the Virginia Tech community on the Drillfield, the heart of the campus, and several locations across the University have been set aside as "quiet places for reflection," KRISTV reported.

Virginia Tech has offered workshops, panel discussions, and other events to help faculty members guide discussions of the April 16 shooting with their students. But with each passing year, faculty have gotten more comfortable with remembering the event in their own way, McNamee told the Post.

Five years also means that the school's undergraduate population has mostly turned over, the Post points out: today’s Virginia Tech students were in high school or middle school at the time of the shootings, not actually on campus.

"I heard about it, I knew it happened, but I feel safe when I am on the campus," Kira Lasinski, 17, who toured Virginia Tech on Sunday, told USA Today.

The University also has not seen its applications decline since the shooting. Fall 2012 freshman applications are expected to exceed 20,000 this year, school officials told USA Today. Last year, 20,828 students applied for a spot in the freshman class, up from the 19,427 who applied in 2007.

Many high school students who visit Virginia Tech also say they feel a strong, tight-knit sense of community, according to Shirley Bloomquist, an education consultant in Great Falls, Virginia.

"That can sometimes be the positive outcome of a tragedy," Bloomquist told USA Today.

However, for the victims' families and friends, the pain of the day is still fresh.

"I don’t feel like my loss is shared or that anybody has any responsibility to share my loss," Celeste Peterson, whose 18-year-old daughter Erin died in the shooting, told the Los Angeles Times. "But when they do, I’m honored. There’s so much pain to go around…however they can get through it is up to them."