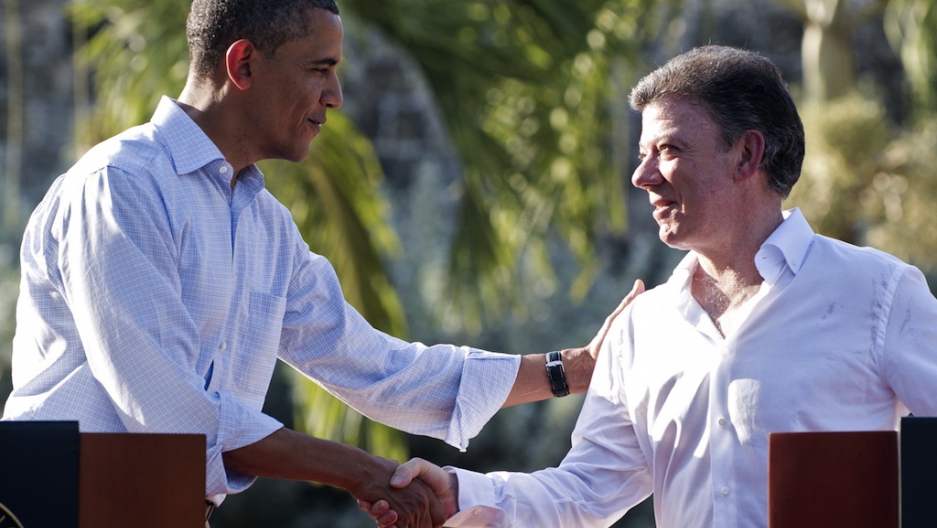 Colombia President Juan Manuel Santos (R) and US President Barack Obama shake hands during a joint press conference in the framework of the VI Summit of the Americas at Casa de Huespedes in Cartagena, Colombia, on April 15, 2012.
Credit: SAUL LOEB
Share

BOGOTA, Colombia — Overlooking violence against Colombian labor leaders and ongoing efforts to prevent unions from forming, the Obama administration announced at the Summit of the Americas over the weekend that the US-Colombia Free Trade Agreement will take effect May 15.

The trade pact, which was ratified by the US Congress last year, was hailed by both President Obama and Colombian President Juan Manuel Santos as the beginning of a new partnership. But union leaders in both countries said a key element of the pact that opened the door to ratification – the so-called Labor Action Plan which is designed to improve conditions for organized labor – had yet to be fully implemented.

AFL-CIO President Richard Trumka called the announcement, made by US Trade Representative Ron Kirk on Sunday, “deeply disappointing and troubling.”

In a joint statement with Trumka, the leaders of Colombia’s two main labor union confederations said: “We have been monitoring the progress of the Labor Action Plan and conclude that, although new laws and directives are in place, the Government of Colombia has not yet demonstrated successful implementation.”

Labor activists are especially concerned about the extremely slow pace of the Colombian judicial system in prosecuting the killers of union leaders. They also want the Labor Ministry to crackdown on employers who undermine labor rights by using labor cooperatives and other forms of indirect employment to prevent the formation of unions.

In an April 10 letter to the Colombian government, five American lawmakers who are monitoring compliance with the Labor Action Plan, expressed concern over several of the plan’s unmet targets.

“It is clear that transforming commitments made under the Labor Action Plan to reality on the ground remains a substantial challenge,” said the letter.

The letter said that in order to keep their jobs, Colombian banana workers are often forced to prove to their employers that they are not affiliated with any unions and pointed out that a strike last year by oil workers for Canada-based Pacific Rubiales Energy in southern Colombia was broken with the help of government forces. Workers were then pressured to quit the country’s main oil workers union to form a pro-company union.

“What is being done to assure that workers’ freedom of association is being respected?” the letter asks.

More from GlobalPost: Meet the New Boss: The rise of Colombia's labor co-ops

However, even critics concede that the Santos government has made more efforts to improve conditions for organized labor than past Colombian governments. Colombia remains the most dangerous country in the world for union activists, however, killings of labor leaders have been reduced in recent years. Last year, 26 union activists were murdered, down from 46 in 2009 and 32 in 2010.

The Obama administration apparently decided to overlook the remaining problems and focus on the pact’s possible benefits.

According to US government estimates, implementation of the pact will reduce duties on US exports entering Colombia and could help create half a million jobs in five years in Colombia, increase the country's output by one percent and lift 1.2 million Colombians out of poverty.

In a conference call Sunday, Kirk told reporters: "The governments of United States and Colombia have completed our technical work and Colombia has passed those laws and regulations necessary in order for the free trade agreement to enter into force on May 15, 2012."