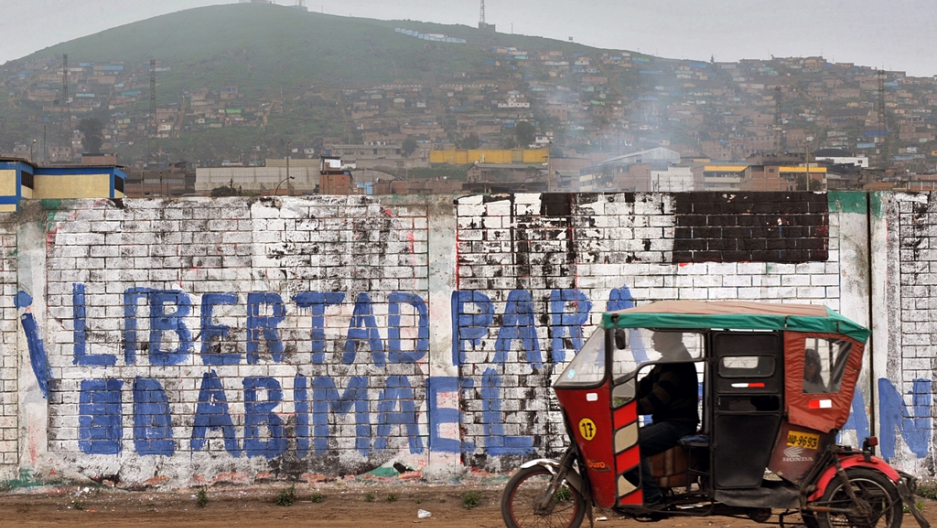 A rickshaw taxi drives past a graffiti reading "Freedom for Abimael Guzman" in a neighborhood in the south end of Lima on September 16, 2011. Abimael Guzman, 76, is the historic leader of the bloody Maoist group Shining Path and serves a life sentence for terrorism. Rebels reportedly from the Shining Path kidnapped at least a dozen gas workers on April 9, 2012.
Credit: CRIS BOURONCLE
Share

After battling with government troops, Peru's Shining Path rebels released the 36 gas workers they captured on Monday. According to CNN, Peru's Defense Ministry said the 1,500 troops encircled members of the Maoist group, forcing them to retreat and leave their hostages behind.

"As a result of the energetic pressure and the tactical and intelligence operations carried out by the Armed Forces and the National Police, the criminal narco-terrorists were surrounded and forced to flee, freeing their hostages in the process," a statement by the Ministry of Defense said.

There had been conflicting reports about the number of workers abducted, with some putting the number as high as 43, and others as low as 7, reported BBC News.

Masked attackers had kidnapped the workers in the town of Kepashiato early Monday morning, according to CNN. A police captain was killed and two people were injured during a search operation Thursday, when suspected rebels opened fire on a military helicopter.

The rebels had demanded a one-off payment of $10 million plus an annual "war contribution" of $1.2 million, as well as explosives. According to BBC News, the government said it did not pay any ransom for the release of the hostages.

When Peruvian authorities captured a longtime leader of the Shining Path in February, President Ollanta Humala said the group was "no longer a threat to the country."