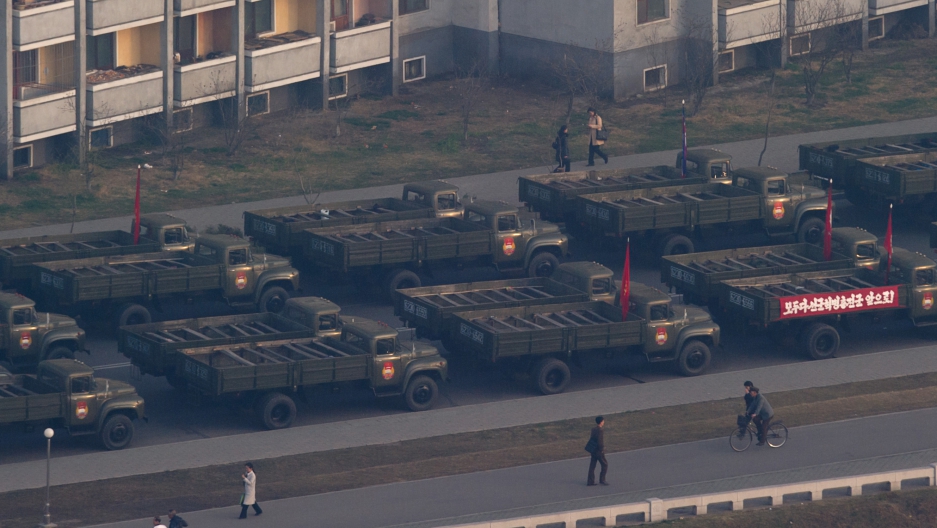 Trucks line up on a street in Pyongyang prior to celebrations in memory of North Korea's first leader Kim Il Sung early on April 15, 2012.
Credit: ED JONES
Share

North Korea's new leader Kim Jong Un has delivered his first ever televised public speech during a major military parade to mark the centenary of the birth of his grandfather, broadcast on state TV.

Kim marked the centenary of the birth of his grandfather, the nation's founder Kim Il Sung, by addressing a crowd gather in Pyongyang for massive, orchestrated 100th anniversary celebrations, CNN reported.

"I express my greetings to our compatriots in South Korea and across the world who dedicate themselves to reunification and the prosperity of the nations," he continued, rarely looking up from his text.

"Let's go on for our final victory!" he said, reportedly pointing his finger ahead to tens of thousands of troops taking part in the massive military parade in the capital Pyongyang, who repeatedly chanted "Mansei! [long life]".

It was Kim's first public address since assuming title of North Korean "supreme leader" following the death of his father Kim Jong Il.

It came two days after the failed launch of a long-range rocket that North Korea had claimed was carrying a satellite into space.

Western nations, who suspect the North of using the launch to test its nuclear missile capabilities, had urged Pyongyang to call off the launch.

The rocket broke apart soon after launch and failed to escape the Earth's atmosphere.

Kim addressed the failure, saying it was important to remember military might was about more than rockets, the Australian reported.

Military officials could be seen saluting from vehicles that drove past tanks lined up in the square.

Kim senior, deemed the Eternal President, was born Aug. 15, 1912. Following North Korea's liberation from Japan, he pledged in Pyongyang to build a nation on wealth, strength and knowledge.

According to CNN, Kim Jong-un offered remarks that regularly stirred applause from onlookers.