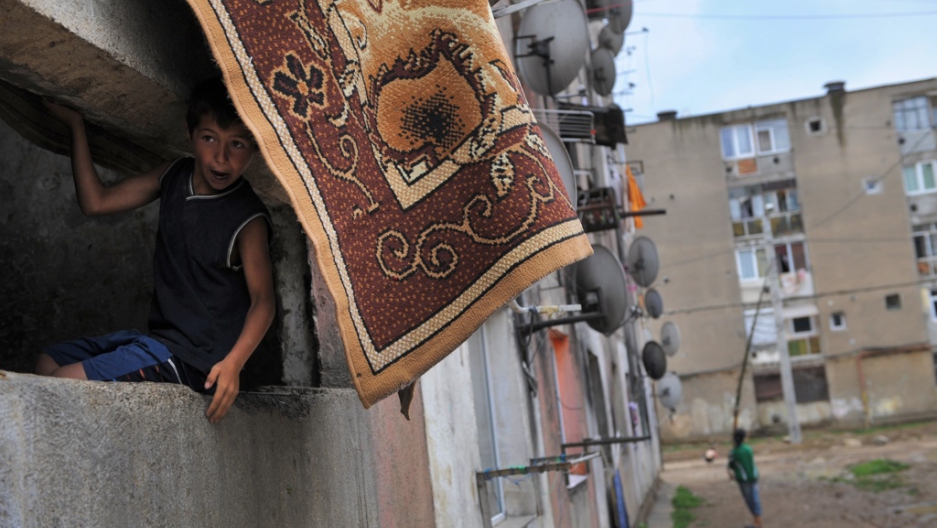 Roma have faced a lot of discrimination in Europe.
Share

BERLIN, Germany — A photograph taken four years ago in a small town in Kosovo is now causing uproar across the German-speaking world.

The image of a young Roma boy pointing a handgun graces the cover of the latest edition of Swiss newsmagazine Die Weltwoche, which has a circulation of about 82,000. “The Roma are coming. Plunder in Switzerland,” is the caption to go with an article that warns of a looming Roma crime wave.

The article has brought an undercurrent of anti-Roma sentiment in Switzerland to the surface. The Roma are Europe’s largest minority group, with a population estimated to be between 10 and 12 million. They are the most marginalized and discriminated against group in Europe, facing poverty, high unemployment, poor health and limited access to education. In many countries, they are also the target of violence.

Yet the Roma issue is often presented as one of crime, security and public order. Far-right groups such as Jobbik in Hungary reap electoral success as a result of their anti-Roma agenda.

The young, armed Roma boy depicted on the magazine seemed tailor-made to play on exactly these kinds of prejudices.

Yet it has since emerged that the photograph was taken in a completely different context. Italian photographer Livio Mancini was in Kosovo in 2008 and took a series of images documenting the often miserable living conditions of Roma people there.

The publication’s use of the image has prompted several individuals in Switzerland as well as Austria and Germany, where the magazine is also distributed, to contact Swiss authorities and report it for incitement to hatred, which is illegal in the country.

The picture agency, laif, has issued a statement saying the use of the image was “distorting and altered the truth.”

On Wednesday, the Central Council of German Sinti and Roma also initiated legal steps against the magazine and sought to prevent its distribution in Germany.

“We have filed a complaint because the image and the article together criminalize an entire minority in a very generalized way,” Herbert Heuss of the council told GlobalPost. “In the article there are stereotypes that one can describe as racist. And as this affects the entire ethnic minority we have also filed a complaint in Germany.”

The council’s complaints are supported by a number of groups in Switzerland, including the Rroma Foundation, the Young Greens and Amnesty.

“We are of the opinion that this image probably constitutes a racist offense in terms of the Swiss penal code,” Stella Jegher of Amnesty Switzerland told GlobalPost.

Read more: Why you should care about Hungary's rabid right

Switzerland’s Federal Commission against Racism is now considering whether to take action against the magazine for violating the country’s anti-racism laws. “I think the combination of the cover image and the title are very problematic,” Guelcan Akkaya, a member of the commission, told AP on Thursday. “This isn’t about highlighting problems, but pushing fears and prejudices.”

“The cover image with this kind of caption is naturally exactly the kind of generalization that feeds the vicious circle of discrimination,” Jegher said. “This image was taken from a completely different context, which was about the terrible poverty some Roma children grow up in, and was then used to say that all Roma are in criminal gangs and that we are now being swamped by Roma who will be carrying out all kinds of crimes.”

Heuss, of the Central Council of German Sinti and Roma, says that the use of a child makes the image particularly dangerous. “It targets the emotions. It is linked to all these resentments and says: Roma, that means violence, aggression, the abuse of children. All this is combined in this article and image, and that is what makes such an article so dangerous.”

Weltwoche’s deputy editor, Philipp Gut, who co-wrote the piece, has said he does not understand the reaction. He said that Switzerland was facing “crime tourism” by Roma gangs.

“Roma bands use their children for criminal purposes,” he said in a video message. “The real scandal is that none of those who are outraged are doing anything about this abuse.”

Heuss firmly rejects the argument that the Weltwoche wants to bring attention to the plight of Roma children. “That is really cynical and inhuman,” he told GlobalPost. “In reality they are not at all interested in the situation of children in Kosovo.”

Stephan Laederich of the Rroma Foundation, the Zürich-based group that represents the country’s Roma, also questions the premise of the article.

“Based on a few facts about some people who are criminals, the entire Roma population was stigmatized as being essentially criminal by nature in the article,” he told GlobalPost.

Laederich says that the arrival of a few Roma gangs to Switzerland, which are visible on the streets begging and sometime involved in petty criminality has exacerbated anti-Roma sentiment in the country.

Jegher of Amnesty says there is indeed a certain increase of Roma children begging on the streets. “We at Amnesty naturally want these children to be protected but what we don’t want is to see their entire ethnic group demonized."

In particular the country’s right-wing populist party the Swiss People’s Party (SVP), which attracts around 30 percent of the vote, has now jumped on the issue, attempting to link Roma to criminality.

Critics argue that Weltwoche, which has links to the party, is actually using the issue for a wider political purpose. The SVP has said it wants to see Switzerland tighten its border controls and limit immigration, possibly by pulling out of the Schengen Agreement, which allows EU citizens to enter the country.

“Ever since the bilateral agreement between the EU and Switzerland on freedom of movement was signed, the right wing party (SVP) has been trying to force the issue saying look, with the opening of the borders we are going to be invaded by those stealing begging criminals and prostitutes etc.” Laedrich says.

Jegher of Amnesty agrees. “The right-wing populist circles want to see immigration from Eastern Europe restricted,” she said. “The right-wing populists, including Weltwoche, are always looking for new scapegoats. For a long time it was the Muslims but at the moment they are not the main focus. It is not the Muslims who are the bad guys now. Now they seem to have chosen the Roma.”

Most Roma had lived in Eastern Europe before the fall of the Iron Curtain. With the expansion of the European Union eastwards since 2004, the Roma issue has become a topic within the wider EU. Last year French President Nicolas Sarkozy expelled about 3,000 Roma, earning criticism from the EU. And with an increase of immigration from Eastern Europe into Switzerland, it is also becoming an issue there too.

However, Switzerland has also long had a gypsy population, a minority group known as the Jenisch, as well as Roma and Sinti. Their numbers are thought to be between 50,000 and 80,000.

“The general public knows very little about the Roma,” says Jegher. “Many Swiss people think that the Roma in Switzerland are just those who have come from Eastern Europe.”

Critics warn that the problem with articles such as those in Weltwoche that talk about “Roma crime waves” is that the minority who are involved in crime become linked in people’s minds with the Roma in general.

“There is no question that some Roma commit crimes,” Jegher says. “But this lumps them all altogether and says that all Roma are criminal or that it is the Roma who somehow pose all the dangers.”

“The problem with stereotypes is that this kind of article is enough to reactivate all the prejudices that people still have,” Heuss warns.

Laederich says that many Swiss members of the minority do not self-identify as Roma because of the deep prejudices they face. “The absolute majority of Roma is integrated, works and [tends] to not say that they are Roma because it is a very negative point.” Despite holding a doctorate and having been a university professor, for example, Laederich says he is often asked if he can read or write.

This kind of stereotyping has led many Roma to simply say they have a different ethnicity, saying they are Armenian or Pakistani for example. “You keep your culture to yourself, you have it at home, you speak Rromanes at home,” Laederich says. “But you don’t say it outside.”