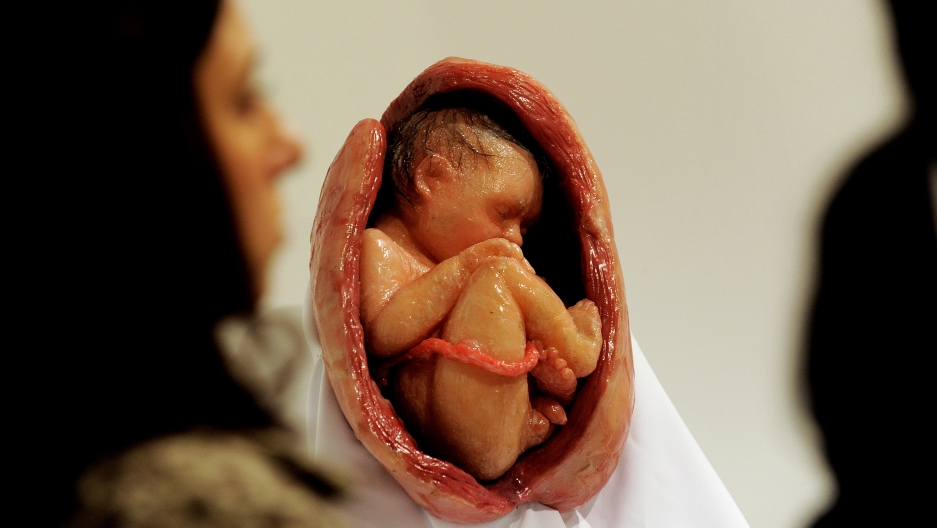 A woman (L) walks past a model showing a human fetus (C), which forms part of the Leonardo da Vinci exhibition Da Vinci Secrets "Anatomy to Robots" at the Sydney Town Hall on May 20, 2010.
Credit: Greg Wood
Share

SÃO PAULO, Brazil — Brazil's Supreme Court voted on Thursday to legalize abortions of severely brain-damaged fetuses. According to Reuters, the measure applies specifically to cases of anencephaly, a disorder that leads to a malformation or absence of large parts of the brain. There is an overwhelming likelihood that babies with anencephaly will die shortly after birth.

Only two of the 10 participating judges voted against lifting the ban, marking the historic shift in abortion law in South America's largest country. Brazil, like many countries in Latin America, has long banned abortion, other than in pregnancies caused by rape and those that pose a threat to the life of the mother.

A woman who terminates a pregnancy under any other circumstances can face up to three years in prison, while the doctor who performs the procedure can be jailed for four years, reported the New York Daily News. Chief Justice Cezar Peluso cast one of the two "no" votes. He predicted the decision would lead to a "massacre" of anencephalic fetuses.

Babies with anencephaly "would never become a person," said Justice Marco Aurelio Mello, speaking for the majority. "This is not about a potential life, but about certain death."

Religious groups, which still hold significant power in Brazil, remain fiercely opposed to any changes to abortion law, according to Reuters.

"We all have an absolute right to life from conception until natural death regardless of any type of deficiency," said Luiz Carlos Ludi, a Catholic priest who led a protest this week outside the Supreme Court building in Brasilia.

According to Fox News, it was chief federal prosecutor Roberto Gurgel who presented to the court the case for decriminalizing abortion in cases of anencephaly. The ruling came in response to a suit filed in 2004 by the National Confederation of Health Workers, which said that denying the option of termination to a woman carrying an anencephalic fetus violated the mother's right to dignity.