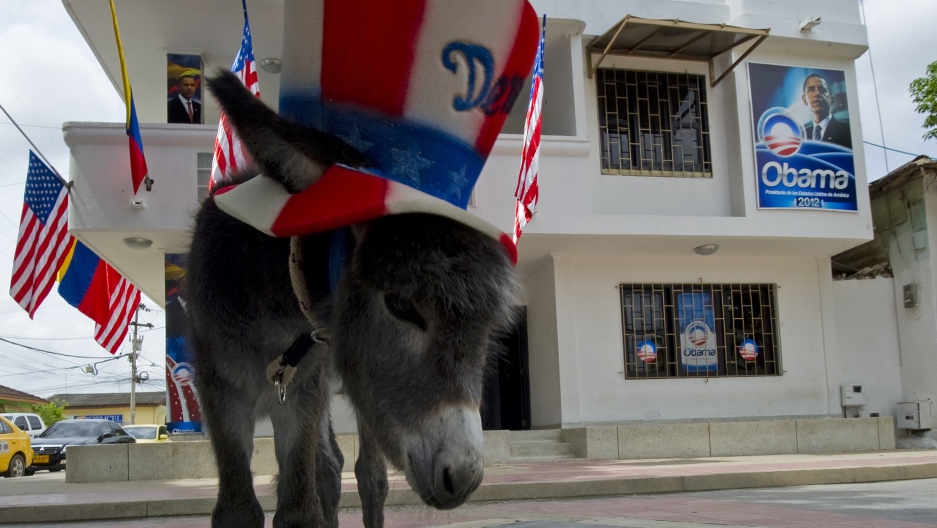 "Demo" (for Democrat), a donkey owned by a big Barack Obama fan in Colombia, Silvio Carrasquilla. Demo may be one of the more agreeable friends waiting to greet Obama when the US president lands in Cartagena, Colombia for this weekend's Americas summit.
Credit: LUIS ACOSTA
Share

HAVANA, Cuba — US President Barack Obama will be wise to wear a breezy “guayabera” shirt to the Summit of the Americas in Cartagena, Colombia this weekend. He’ll be taking a lot of heat.

Some of it will radiate from the usual sources. Washington’s left-leaning critics from the nations of the Venezuela-led ALBA bloc are looking to cause a ruckus over Cuba’s exclusion from the gathering. Ecuadorean President Rafael Correa already announced a one-man boycott of the summit in solidarity with Havana.

But Obama may also hear pointed criticism from America’s allies in the region. Mexico, Colombia and Costa Rica are unhappy with the US-backed drug war. Brazil, South America’s ascendant power, is grumbling about loose US monetary policy, blaming a flood of Wall Street money for driving up inflation, crimping exports and stunting growth.

Regional observers say the United States will be keen to keep the conversation on trade liberalization, security cooperation and the promotion of democracy. But the goodwill that Obama enjoyed at the last summit, in Trinidad and Tobago in 2009, is now mostly gone, and this weekend’s event may end up highlighting the degree to which Washington is no longer boss in what it once viewed as a backyard.

China has made significant inroads to the region in recent years. It has provided billions in new credits and infrastructure projects, leaving Latin American governments and their fast-growing economies less dependent on the US.

It’s also an election year in the US, so Obama may be looking to avoid any missteps that could end up in a Mitt Romney attack line.

“For Obama, the timing of the summit is unfortunate — just as the general election campaign is getting in high gear,” said Michael Shifter, president of Inter-American Dialogue, a Washington, DC policy forum. “The moment is not propitious to take bold steps or propose a new strategy.”

Instead, Shifter said, “Obama will likely be cautious and avoid any problem or embarrassing situation that could be used by Republicans to defeat him in November.”

In the past, such hemispheric gatherings have done more to highlight regional divisions than areas of cooperation, such as the 2005 meeting in Argentina, which was marred by violent protests against then-President George W. Bush.

This time around, Colombian President Juan Manuel Santos will try to make sure the summit doesn’t turn into a farce or a forum for grandstanding speeches, Shifter said, especially on the Cuba issue.

“It is unlikely that Santos will allow the criticism to get out of control,” he said, “but he knows there is always some unpredictability in such gatherings.”

On the other hand, if Obama can parry some of the anti-American criticism and float above the attacks he’s likely to face, he could benefit politically and make headway toward reasserting US leadership in the region — something he’s been promising to do since his 2008 election campaign.

But Obama can no longer carry the room on his sheer charisma, just as the US can’t just show up and set the agenda anymore as the region’s hegemonic power, said Geoff Thale, program director at the Washington Office on Latin America (WOLA), a policy think-tank.

“The US can no longer take the region for granted, and assume that others will automatically go along with US priorities and policies,” Thale said.

Obama may not face outright hostility, but convincing and cajoling other leaders in the region to fall in line with US interests has become increasingly difficult, said Thale.

“This process, in which US unilateral power in the hemisphere is declining, is a gradual one. It will be reflected in the summit, though probably not in dramatic confrontations,” he said, adding that he does not expect Obama to “directly challenge” other countries in the region, like Venezuela and Cuba.

Cuba, which was kicked out of the Organization of American States (OAS) in 1962, is the only country in the hemisphere that wasn’t invited to the OAS gathering, which will convene 33 heads of state Saturday and Sunday.

Several key leaders in Latin America — including Brazilian President Dilma Rousseff — say that the Colombia gathering should be the last in which Cuba is left out.

The US insists Cuba can’t attend because it’s not a member of the OAS and would have to make major reforms to its one-party socialist state before it would be eligible to join.