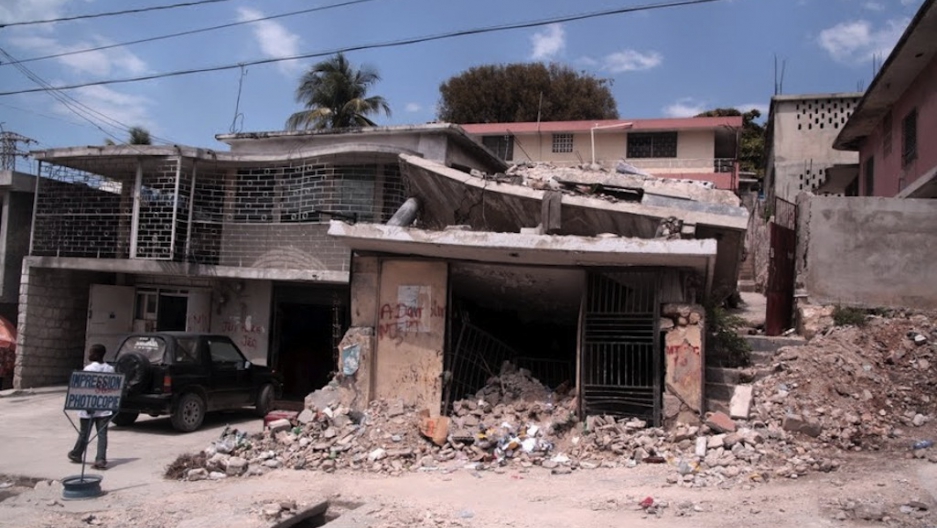 Much of the rubble still lingers in Port-au-Prince, but soon many of the demolished homes will be replaced with seismically safe, eco-friendly dwellings.
Credit: Dan Weissman
Share

Dan Weissman is a Master of Design Studies candidate at Harvard’s Graduate School of Design (GSD) and an architect by training. Since February 2011 he has been involved in a series of reconstruction projects that are a collaboration between the GSD, MIT’s School of Architecture and Urban Planning, and various NGOs, government agencies and corporate entities throughout the Port-au-Prince region. Over the course of six trips to the city, the team continues to engage in projects ranging from small architecture and urban design to macro-scale territorial planning, water and landscape management projects. The following article is a snapshot of Dan’s personal experiences.

PORT-AU-PRINCE, Haiti — As we fly in, Haiti is a beautiful but heavily scarred landscape, mountainous yet devoid of vegetation. Just before landing, I see Zoranje, north of the capital of Port-au-Prince. The 400-family community has become the focal point of far too much international attention, with a failed housing expo that left the community without quality urban space, jobs, or infrastructure. The thought leaves a bad taste in my mouth as we land.

In the past year, this routine of touching down at Port-au-Prince’s single runway airport has become a regular part of life.

Stepping off the airplane, Boston’s frigid cold is immediately a distant memory. Ahead, the airport band, clad in Digicel or Western Union T-shirts, lethargically plays local tunes. It’s a joyous entry into Haiti before the chaos of customs and the nervousness of waiting for bags. I dodge a sea of uniformed taxi drivers and bound out into the sunlight. Haiti is effervescent; I’m back again.

After leaving the airport we make the slog up to Petionville, the rich part of town, and location of many of the NGO offices dominating the reconstruction effort. Historic Port-au-Prince is situated along the coastline on an alluvial plain north of one of the tallest mountain ranges in the Caribbean. Petionville, perched one thousand feet above sea level en route to the mountains, has a legible city form organized as a grid, with formal street shops and golf course (currently home to the J/P HRO Tent Camp). Once a separate town, the zone between Port-au-Prince and Petionville is now mostly filled with informal urbanization.

Sitting in the passenger seat, I recall the billboard “You aren’t stuck in traffic, you are traffic.” Much of our experiences have been gleaned from long drives through the city, where we often sit in traffic for hours. Compounding the congestion, many roads are heavily eroded from poor water management, making rocking and rolling through town in 4x4s a normal part of life. Other forms of mobility, such as walking or biking, are difficult owing to the terrain, pollution and chaotic motorists.

On each trip, we have seen improvements in the city. On our first trip in March 2011, trash and rubble littered the streets, and many Haitians seemed to be just waiting around for life to reboot. Almost 700,000 people were surviving in tents (some accounts put that number over a million). In September 2011, we saw demonstrations in Champ de Mars square in response to the UN’s inability to control a cholera outbreak (which they purportedly caused). The government remains headquartered in a tent next to the destroyed palace building, and continues to have a tenuous relationship with Haitian society.

By our sixth trip, I see real progress. People inhabit Petionville’s Place Boyer as a park, not as a tent camp. Vendors clean the streets in front of their shops. Fresh hand-painted signage on many buildings looks incredible. And as we drive through the city, billboards illustrate President Michel Martelly’s recent endeavor to place almost one million children in school.

Still, many problems remain. Like many post-colonial cities, Port-au-Prince first developed around a contained core in the 18th century. The influx of people vastly increased in the 1990s, and since then, a host of informal settlements have come to dominate the city’s landscape. They exist in various states of disarray post-earthquake. But the fast-paced urbanization has taken an irrevocable toll on the environment.

Infrastructures are lacking across the region. Beyond awful road conditions, electricity is spotty, but most buildings we work or live in have back-up generators. Garbage trucks pick up municipal waste in some of the formal city, but most often it’s burned in the streets. One infrastructure that works fairly well are the cell phone networks; I can check email, text and make calls on my iPhone. But of all infrastructures, water is the most pressing element missing.

Instead of sewers, much of the potable water throughout Port-au-Prince is served by tanker trucks that deliver cleaned water to service points, run by opportunistic entrepreneurs. At these small businesses, residents may buy water for their personal use, or to resell. This is far from a sustainable solution, as it relies on heavily polluting trucks to move water around the city in constant traffic.

When the rains come, it’s hard not to think of those in tent camps, as each major rain event flushes disease through the city’s riparian corridors. Normally Port-au-Prince’s rivers look like rubble ditches filled with trash, so when water floods through, human waste and trash from the upper reaches of the city flush down to the slums, bringing a spike in cholera down near the water’s edge.

What does this all mean for the future of the city?

Port-au-Prince exemplifies the condition of explosive, unplanned growth. Many NGOs will not touch any project without clear land title (part of the outdated, unforgiving bureaucracy), meaning much of the city awaits redevelopment and planning. Yet innovative projects are successfully moving forward, especially in informal neighborhoods, where more radical forms of land-ownership and titling are being employed.

At the architectural scale, much initial redevelopment has focused on rebuilding seismically safe dwellings and structures. Although necessary, unfortunately this focus fails to account for the myriad elements of the built environment people must interact with on a daily basis, such as waste disposal, water and electricity. Although new (or retrofitted) homes built with durable techniques may be earthquake resistant, homes may still be mostly uninhabitable due to excessive heat gain, or lack of light.

These are the conditions our team seeks to engage and hopefully help mitigate. For example, in one project for 150 homes in the area of Carrefour Feuilles, we have proposed a kit of parts for homes that may be incrementally built onto after our initial design is constructed. The base unit will include provisions for water and sanitation infrastructure. Roofs are oriented to minimize solar exposure and maximize ventilation. And as an example of coupling systems through design, each unit will also include a small garden space that will allow residents to grow food, as well as help shade the homes from the sun.

Moreover, we consider these homes only one part of a larger urban system of public spaces, services and places for jobs and education. At the end of the day, we believe our design process must truly be a collaboration with residents; our design work merely serves as a backbone for reconstruction.

A long road ahead for sure, but if this disaster is compared to Berlin in 1945 (which had three times as much rubble) or New York City’s 9/11 (which took twice as long to clear the debris), Port-au-Prince may yet have a fighting chance for its phoenix moment. Hopefully we in Boston can do a small part to empathize and create dialogue in that process.

You can read GlobalPost's continuing series, funded by the Ford Foundation, at “Fault Line: Aid, Politics and Blame in Post-Quake Haiti.”