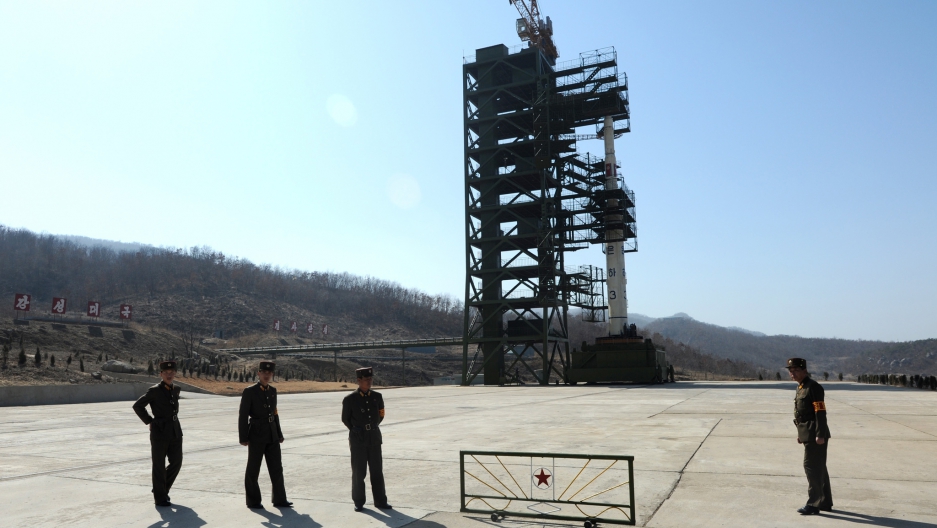 North Korea launched its much-touted rocket on Thursday at approximately 7:39 a.m. It reportedly failed to launch, ABC News reported, but not before causing an international stir, as the UN and various countries were quick to respond to news of the power move by the fiercely secretive state.

However, some analysts believe North Korea is trying to send a message to its own people more than those abroad.

"Often when North Korea acts out, its purpose is to communicate with the broader world, communicate to the United States or to Japan or South Korea,"  Jim Walsh, an international security analyst from the Massachusetts Institute of Technology, told CNN. "This is really about internal messaging, being able to go to its own public and say, 'Look, all these Western journalists are here, we're really important, we're really a big deal.'"

More from GlobalPost: Series: Next of Kim

The 90-ton rocket, which launched with a larger than anticipated flare, has crashed into the sea, US officials reported.

The rocket launch also defied an agreement between North Korea and the US made in Beijing in February, when North Korea said it would halt nuclear missile tests in exchange for food aid, ABC News reported.

"It's impossible to imagine that we would be able to follow through [and] provide the nutritional assistance that we had planned on providing, given what would be a flagrant violation of North Korea's basic international obligations," Jay Carney, the White House press secretary, said on Tuesday before the launch.

US officials are also expecting what they call a North Korean "two-step," in which one instigative act by Pyongyang is followed by another, CNN reported. Washington and its allies have said they expect North Korea to conduct a third nuclear bomb test in the near future.

Japan had threatened to shoot down the rocket if it appeared to be threatening its territory, CNN reported.

"We are fully prepared to deal with any contingency," Japan's Prime Minister Yoshihiko Noda said Thursday, according to the news agency Kyodo.

The country was on high alert amid anticipation of the rocket launch, and installed ground-based interceptors on Okinawa, Ishigaki and Miyako islands, and in Tokyo to intercept any part of the rocket that could potentially threaten Japanese territory, New York Daily News reported.

Japan's lower house of parliament also approved a resolution against the planned satellite launch by North Korea this month, which made any actions that damage the peace and stability in northeast Asia illegal, regardless of what the intentions, according to New York Daily News.

North Korea's direct neighbors called the rocket launch a "grave provocation" and said it would respond with "appropriate countermeasures."

Both South Korea and the Philippines ordered commercial planes and fishing boats to stay clear of the rocket's proposed path to prevent any damage, according to CNN. They rallied along with the UN, Japan, and the US to bring a halt to North Korea's plans.

However, elections in the country went on "as planned," as GlobalPost's Justin McCurry reported.

As one of the countries along the rocket's direct trajectory, the Philippines was also on high alert Thursday, as disaster officials warned local governments to be ready for emergencies in case the rocket veered off its projected flight path and showered debris, The Philippine Daily Inquirer reported.

“We have also been told that the Philippine Nuclear Research Institute of the Department of Science and Technology have prepared their equipment and personnel to handle the debris and to assist local government units that may be affected,” Representative Jack Enrile said.

The country had no-fly and no-sail zones in effect Thursday morning, and residents along the Philippines' eastern coastal areas were advised to stay indoors.

In Catanduanes, the Provincial Disaster Risk Reduction Management Council advised residents to “take extra precautions” instead of staying indoors during the rocket launch, according to the Inquirer.

“The stay-indoor policy could paralyze economic activity in our small province and the consequences could be a disaster in itself,” Governor Joseph Cua said.

Vitaly Churkin, Russia's UN ambassador, told reporters that members didn't have "clear agreement" about what steps to take if the launch goes ahead.

"But one thing I can tell you: We have unanimity of understanding that if it were to happen, that would be a clear violation of two Security Council resolutions," said Churkin, according to CNN.

Russia (along with China) backed a previous UN Security Council statement condemning a 2009 North Korean satellite launch, the National Journal reported, and it has stood alongside its partners in the G8 in condemning the launch.

North Korea's main ally, China, has been subtly trying to calm the diplomatic frenzy the rocket launch has created, the Associated Press reported.

"We are very concerned about that issue," said China's UN Ambassador Li Baodong, the AP reported, adding that Beijing wanted to "diffuse tension, not inflame" it.

“The Chinese side is troubled by the developments, and strongly encourages everyone involved on all sides, at high and low levels, to remain calm and reasonable,” Chinese Minister of Foreign Affairs Yang Jiechi told reporters Monday, according to the Taipei Times. “These issues need to be worked out in a diplomatic and peaceful manner.”