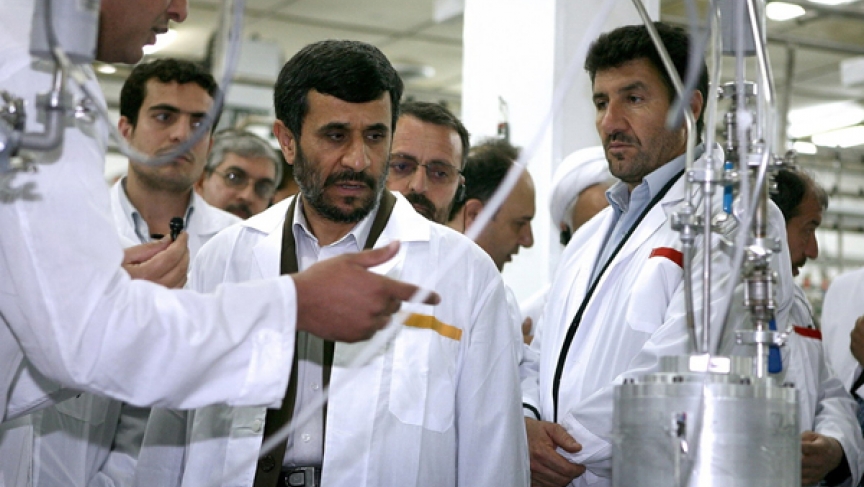 The talks will revolve around Iran's controversial nuclear program, a program Iranian officials insist is benign. But western leaders worry a nuclear Iran would lead to a Middle Eastern arms race and destabilize the world’s oil market. But are sanctions and other diplomatic efforts enough to prevent Iran from developing nuclear weapons?

On Wednesday, Jalili said Iran is open to "new initiatives" in talks. In the past, Iranian diplomats have avoided negotiations. But with the tightening noose of sanctions on Iranian oil exports taking a toll on Iran's economy, some analysts believe this time around will be different. Still, many Israelis are skeptical about Iran's intentions. Prime Minister Benjamin Netanyahu has repeatedly said Iran poses a significant threat to Israel, one it will not hesitate to counter with force.

Tel Aviv does not feel like a city about to go to war. Restaurants and cafes are packed. Traffic is as snarled as always. But scratch just beneath the surface, and residents here, like 25-year-old Jasmine Bensal, are very concerned about the situation with Iran.

“It's a very scary situation,” Bensal said. “If they're going to have a bomb, we need to do something.”

A recent poll found two-thirds of Israelis support a military strike as a last resort, even knowing that will likely lead to a counter-attack by groups such as Hamas and Hezbollah which are allied with Iran.

Matthew Kalman, the editor in chief of the Jerusalem Report magazine, thinks it is unlikely Israel would strike without coordinating with the U.S.

“I think the noise we've been hearing about some kind of conflict or deep division of approach between Israel and the United States is camouflage. I don't believe that Israel, which is the United States' most important strategic military partner, would go it alone on an attack with as serious implications as this one.

But David Horovitz, the editor of the Times of Israel website, says if Israel feels its very existence is endangered it could act alone.

"The majority of the Jewish people are now gathered in this tiny sliver of embattled territory," Horovitz said. "The prime minister of this country makes comparisons, publicly, between the situation now and the situation either prior to or during the Holocaust. The point being that there was no one to save the Jews. Here is the leader of the Jewish nation in its revived homeland, warning ‘we will not sit quietly by’ if his people are threatened with genocide.”

In Europe, the tone is less dire.

The European Union has adopted what they refer to as a “twin track” approach to Iran. It’s a combination of what they call “openness to meaningful negotiation” on the nuclear issue without preconditions, and on the other hand, a series of hard-hitting financial and trade sanctions.

Iran pushed back against these sanctions by cutting off its crude oil exports to Germany. France, Britain and Greece have already lost Iranian crude oil exports, and Iran is considering cutting its supply off to additional European nations.

Tarjia Cronberg is a Finnish Member of the European Parliament and chair of its delegation for relations with Iran. She says Europe is too bogged down with the public debt crisis and recession to prioritize the situation with Iran.

“One has to make a distinction between the American understanding and the E.U. understanding of Iran," Cronberg said. "In the U.S. you had a lot of war talk. There were seminars on military strikes. In Europe, people don’t believe there’s any reality behind this. It's not on our agenda in the same way.”

At the American-Israel Public Affairs Committee conference in March, President Barck Obama made a strong commitment to Israel.

“I have said that when it comes to preventing Iran from obtaining a nuclear weapon, I will take no options off the table and I mean what I say," he said.

Obama cautioned, though, that it is too early to act now.

“Moving forward, I would ask that we all remember the weightiness of these issues; the stakes involved for Israel, for America, and for the world. Already, there is too much loose talk of war," Obama said. “I firmly believe that an opportunity remains for diplomacy — backed by pressure — to succeed."

Aaron David Miller, who served as an advisor on the Middle East under six secretaries of state, thinks it is imperative for the United States to proceed with caution.

"We cannot go into what I fear will be a looming military confrontation between the United States and Iran without thinking through all of the consequences — however difficult it may be to predict — conditioning the public to the risks and to the advantages," Miller said. "We need to think this one through very carefully."

To discuss the details of Iran's nuclear program, AAM sits down with Paul Brannan, Senior Analyst at the Institute for Science and International Security