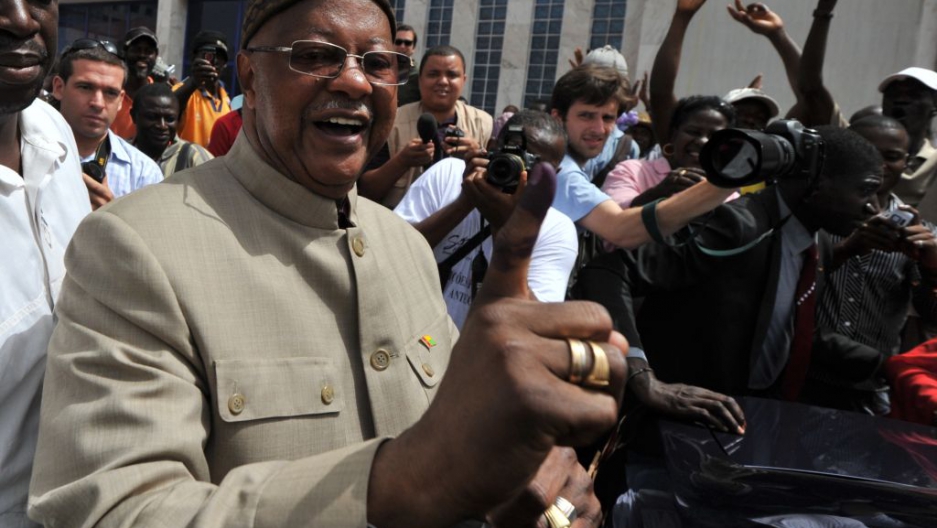 Guinea-Bissau presidential candidate and Prime Minister Carlos Gomes Junior shows an inked finger after casting his vote in the first round of presidential elections on Mar. 18. He is now missing after his home was attacked during an attempted coup.
Credit: ISSOUF SANOGO
Share

Soldiers in Guinea-Bissau have arrested the Prime Minister and election front-runner Carlos Gomes Junior in what appears to be a military coup.

The BBC reported that large parts of the capital Bissau are under the control of the soldiers, and heavy gunfire and explosions has been heard throughout the city.

The troops are also understood to have taken control of the ruling PAIGC party headquarters, and the state radio service, which is now off-air.

Gomes was arrested a few hours after soldiers attacked his home with grenades, the Associated Press reported. The apparent coup comes just two weeks before Gomes was to take part in the presidential runoff election.

Reuters quoted witnesses and diplomats as saying that the house of Gomes Junior was the main target.

The whereabouts of the interim president, Raimundo Pereira, who took over after the death of the previous leader Malam Bacai Sanha in January, remain unknown, according to The New York Times.

The West African regional body ECOWAS has condemned the attempted coup in what Associated Press described as "coup prone" Guinea-Bissau.

AFP explains that Guinea-Bissau, which is a major drug trafficking hub between South America and Europe, is in the middle of a two-round presidential election

It adds that the opposition, led by ex-president Kumba Yala, had called for a boycott of the April 29 run-off vote and warned against campaigning; prompting fears that violence would erupt.

Since winning independence from Portugal in 1974, Guinea-Bissau's army and state have remained in constant conflict, News24 said, adding that in that time no president has ever completed a full term in office.