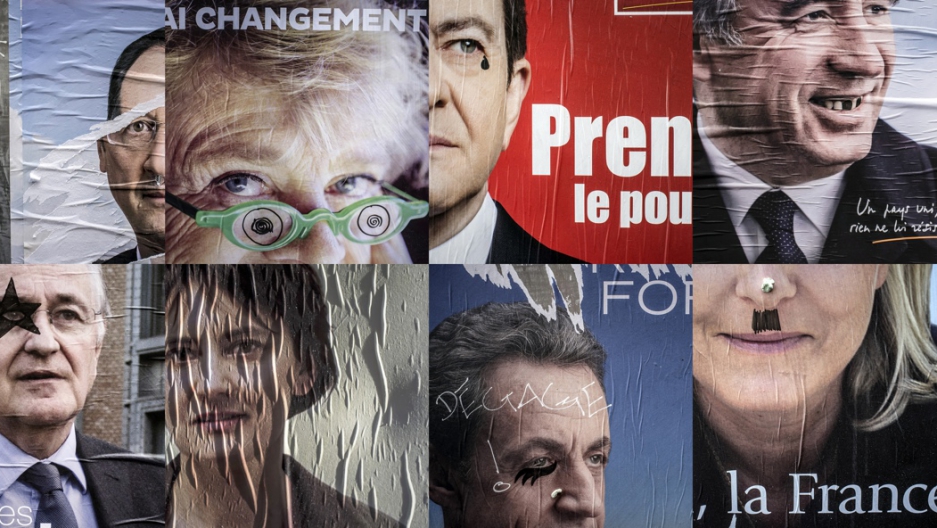 A composite photo of doctored campaign posters in Lyon, France. Many in Europe worry the French aren't taking their election seriously enough.
Share

ROME — She was supposed to be a star of the French elections, but as the campaign enters its final countdown to the first-round vote on April 22, Angela Merkel has been noticeably absent from the political maneuvers west of the Rhine.

The German chancellor had announced she'd campaign in France to secure the re-election of President Nicolas Sarkozy, her sidekick in drawing up the continent-wide belt-tightening plan designed to pull the euro-zone out of its debt crisis.

In the end, Sarkozy's advisors decided he'd do better by distancing himself from Merkelian austerity and focusing instead on tried-and-tested vote-winners in France, like getting tough on immigration and erecting protectionist barriers against China and other perceived villains of globalization.

Read more: In Europe, fears of a "Fourth Reich"

That's also made sharing a platform with him seem somewhat less attractive to Merkel.

Many in Europe are viewing the French election with concern. The fear is that whichever candidate emerges victorious from the second-round vote on May 6, both are avoiding any serious debate of the tough economic decisions facing France and the rest of the euro zone.

"They need to reform the French economy, the labor market, pensions. They need to face all the other challenges, but I'm not sure they are ready to have those debates in France," says Piotr Kaczynski, of the Center for European Policy Studies, a think tank in Brussels. "It's never easy to take those decisions, but it can become easier once you have had a public debate on them."

The French electorate is perennially averse to moves to overhaul its generous labor and social-protection arrangements, even though rules like a 35-hour maximum work week, and high corporate taxes or social costs for employers that run at almost double levels in Germany are blamed for the country's declining economic competitiveness.

Although both Sarkozy and Hollande agree that France needs to boost growth and balance its budget, neither has prepared the electorate for the painful measures that may be needed to do that.

Instead, Sarkozy has focused on protecting French markets from foreign competition, while Hollande has promised to raise taxes on the rich to create tens of thousands of new public-sector jobs.

With Hollande leading in the opinion polls, Sarkozy in recent days has been issuing warnings that his rival's tax-and-spend plans risk sending France the way of Europe's southern crisis victims.

Hollande has been seeking to reassure European leaders that his demands for a greater commitment to economic growth will not lead to loose spending or a disintegration of the new treaty designed to guarantee fiscal discipline in the euro-zone.

The German press has reported that, with an eye on Hollande's opinion poll ratings, Merkel's office has opened tentative contacts with the Socialist candidate. If Hollande does win, it will be essential that he quickly establishes a working relationship with Merkel on how to tackle the euro crisis.

Already jittery over Spain, Portugal and Italy, markets are likely to pounce on any signs of French wobbling on fiscal discipline or Franco-German divisions, especially since a Greek election called for May 6 will add to the political uncertainty.

"If the financial markets become restless again, as they have been doing of late, then that narrows Francois Hollande's political room for maneuver should he be elected," says Thomas Klau, who heads the Paris office of European Council on Foreign Relations. "The more nervous the markets are, the less he can afford to add to the uncertainty by triggering major tensions with his partners."

European observers have discounted some of the more contentious declarations from Sarkozy and Hollande as campaign rhetoric designed to stop them losing votes to candidates on the political extremities.

Sarkozy is threatened on the right by the National Front candidate Marine Le Pen, while Hollande risks losing first-round votes to the Communist-backed Jean-Luc Melenchon.

Few take seriously Sarkozy's threat to pull out of the European Union's passport-free travel zone, and his appeal for protectionist trade measures is unlikely to muster support from other European nations.

"The call for a Buy European Act does reflect a strong French conviction, shared across the party political spectrum, that the present state of globalization is highly damaging for Europe," Klau said. "This is viewed with a degree of concern by free trade apostles in the UK or countries like Germany, which do very well out of the current situation. This is not an agenda that France can hope to shape on its own."

That reflects another reality the winner will have to come to terms with on May 6: the euro crisis has clearly revealed that the Franco-German partnership that was the driving force behind the European Union is no longer a marriage of equals.

"It's hard to resist the temptation to compare the decadence or the disorientation of France with the personalities of the presidential candidates," columnist Miguel Angel Bastenier wrote Tuesday in the Spanish daily El Pais. "If there are any remnants of that partnership that is supposed to run the European Union ... it's only because Berlin finds it more convenient to have somebody to share the burden of dealing with the crisis."