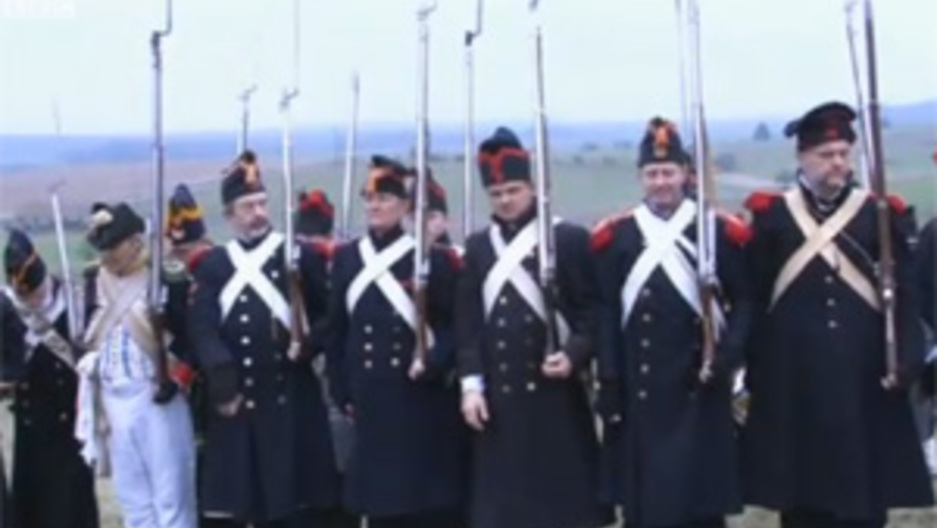 Share
Euro-Disney celebrated its 20th anniversary on Thursday. The mega-theme park outside Paris got off to a rocky start and is still losing money. But the French seem to have come around to Mickey, Goofy and the gang. Last year it had some 16 million visitors — twice as many as the Louvre, in Paris. Not to be outdone, some Frenchmen are hoping another theme park can do better. It doesn't have an official name yet, so let's just call it Napoleon Land. That's right, a theme park centered around the 19th century French emperor Napoleon Bonaparte. If all goes according to plan, it will be built in the French town of Montereau, south of Paris. On a bridge in Montreau there's a giant statue of Napoleon. He's pointing toward Vienna, one of his many points of conquest. But technically, he's also pointing to some open fields, here, just across the river. It's one potential site for Napoleon Land. Montereau's mayor, Yves Yego, is the guy behind Napoleon Land. He said he's been toying with the idea since Mini and Mickey first came to France. "Before EuroDisney opened, 20 years ago," he recounted in his office, "there was a discussion between Disney and French tourism officials. A Frenchman said, 'Disney won't have competition, unless one day we make a theme park for Napoleon.'" Yego said that Bonaparte is the only figure France has who can do battle with Mickey Mouse. So now the battle is on. Or nearly. And the town of Montreau seems to be the perfect setting. It's pretty, there's open land, it's only an hour south of Paris. And it's the site of Napoleon's last battlefield victory, on February 18th, 1814. Townsfolk consider him a hero, and support the Napoleon Land project. "He was a great man, said an elderly resident named Madame Tangui, as she passed by Napoleon's statue. "He was a great warrior." Clearly there's local support. There's also a slogan: Enter Into History. But Napoleon plus a theme park would add up to what exactly? For starters, Yego said, there'd be a daily reenactment of the battle of Montereau. There'd be a huge model Sphinx and pyramids to cover Napoleon's brief presence in Egypt. Yego said even Napoleon's failed conquest of Russia has theme park potential. "Think of the war on Russia," he said, "the snow, the cold. This could be the pretext for an indoor ski dome." The idea would be to have tourists ski between the Russian troops and Napoleon's forces. "With cannon fire all around you," Yego said. "It's exciting. You'd be skiing down through history." But that history itself is complicated. For many Napoleon is a hero, a great republican lawmaker. But for others he was a brutal invader. Even here in Montereau you can find controversy. Down the street from Napoleon's statue there's a museum dedicated to the battle. It includes a model of the Montereau battlefield, with tiny plastic soldiers. Some 6,000 soldiers died in the fighting. French school teacher Isabelle Mate is visiting with her class of 10-year-olds. She says they often ask why Napoleon waged so much war. "Napoleon was a great general, and emperor," she said. "But often what my kids retain is that he launched battles in which many men died for nothing. He wanted to build a great empire but in the end he left us with the borders we have today." Mayor Yego is well aware that not everyone reveres Bonaparte. So is perhaps the theme park project's most important supporter, Charles Napoleon. Charles is a descendant of Napoleon's youngest brother, Jerome, and an adviser for Napoleon Land. He said mixing history with entertainment doesn't mean sweeping the less savory sides of Napoleon under the rug. "I think this project has to include these different points of view about this man," he said. "This is a real challenge, to integrate in a French project this world wide vision of Napoleon." Charles Napoleon said he's creating a committee of historians who will help to define the project. And keep it accurate. The other overriding question is whether France has room for another theme park. Besides Disney there are a handful of others, including one centered around comics legend Asterix. Charles Napoleon and Mayor Yego said if they can build Napoleon Land and make it fun — without trivializing French history — then the tourists will come.